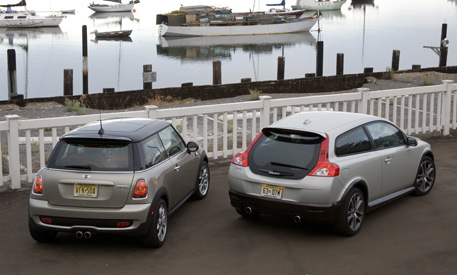 This is a comparo I think we will keep seeing until every outlet has done it or one of the cars stops being made. This time it’s Road & Tracks turn (via AOL).

Off to a good start here.

>There’s no mistaking that the Cooper S is somewhat pigeon-holed. It can’t seat four full-sized people, it can’t carry anything larger than a couple of duffel bags, its radio layout is non-intuitive. And with a speedometer face that’s more appropriate for use as a satellite dish than a gauge, it’s enough to make “regular” auto enthusiasts squirm. But forget them, as neither the Mini nor the Volvo is meant for the regular enthusiast. These cars are meant for the owner who places style and design a tick higher than performance. But which car is better at implementation?

And the reviewer keeps it going.

>All performance observations aside, both cars’ reason for life is style. For that alone, I disagree with Engineering Editor Simanaitis. While the C30’s clean look and execution are undeniable, the Mini has unique character. Viewed from the front, the C30 disappears into the crowd, while the Cooper S presents an unforgettable face. Even though the Cooper has been on sale for over six years, it still turns heads and gets favorable comments.

Go ahead and click through and come back. Comments will still be open.