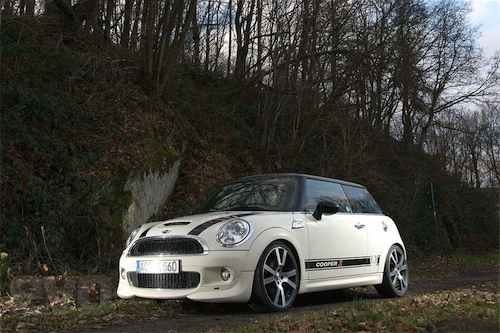 AC Schnitzer usually turns their efforts toward tuning BMWs. Look like they have decided to take a shot at tuning MINIs too. Besides suspension and body kit, they have tuned it to have 49bhp more than the standard car.

>And without so much as a second glance we’re sitting on the speedy side of 140mph. Perhaps it’s not such a bad thing the new Mini’s speedo is enormousÃ¢â‚¬Â¦ Pressing down into the tarmac, the Schnitzer feels totally stable at this speed.

>It’s not actually raining but the roads have that permanently moist winter film as we turn onto an almost alpine ribbon of tarmac twisting down to a reservoir. Nonetheless the Schnitzer S is somehow generating serious levels of grip. The gearshift is sweet and, as with the beautiful weighting of all the major controls, imbues the Mini with a level of quality that lifts it above what you expect from a hot hatch

Too bad they didn’t upgrade the brakes. Even MINI did that on the JCW MINI.