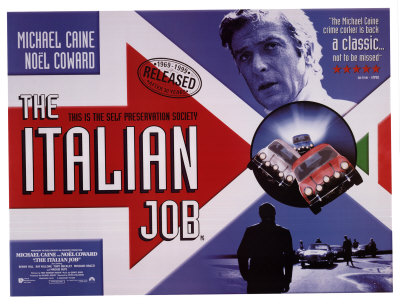 Please note that is a small i, small n, small i. Yes, they do Mini Cooper S Classic. Which could only mean, really, one film. The Italian Job from 1969.

>The Mini Cooper which played a starring role in the classic crime caper The Italian Job has been named best movie car of all time.

>In 1969 film The Italian Job, Michael Caine attempts a massive gold heist in the city of Turin, using three of the classic Mini Coopers as getaway cars.

There are quite a few movies out there with very cool cars in them. How did the Mini pull this off?

>The Mini scooped the award in a poll of 2,000 movie fans conducted by Uniroyal tyres.

There you have it. I’m honestly surprised the Tumbler from Bat Man Begins didn’t make the cut. Do you remember the tires on that thing? Go ahead, list your favorite below.