Here at MotoringFile, we’ve held one consistent point of view when it comes to manual transmissions in MINIs: they’re a must. Sure, some people need an auto, but they’re sacrificing a lot of the car’s character in our opinion. Trouble is, a lot of people, especially here in America, don’t know how to drive a stick. So MINI USA and it’s agency BSSP, in typical cheeky fashion, are encouraging people to go manual. 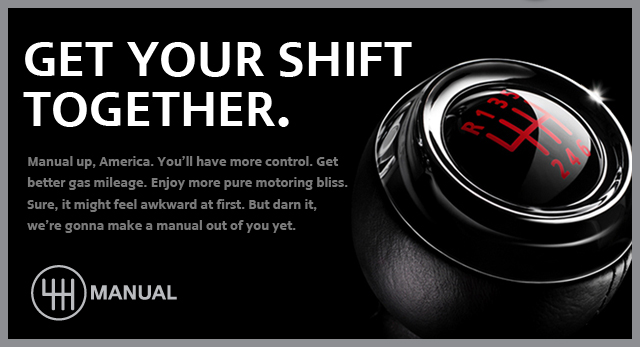 And yes it’s a brazen move. But it’s inline with how the brand speaks and a completely own-able point of view. And others are noticing. Karl Greenburg over at MediaPost put out a survey asking what brand his readers thought would have “the audacity” to create a whole marketing campaign just around the manual transmission.

Only one person actually got it right (kudos to Tom Keane at USA Weekend.) Yes, it’s MINI. And the BMW unit actually makes perfect sense if one recalls that when the brand (re)launched here in 2002, it offered the MINI Cooper only as a manual-shifter, and most certainly the brand has the highest manual take-rate percentage among any automaker that isn’t a pure sports-car brand. (actually it was the Cooper S Tom, but we’re not holding it against you)

Thomas Salkowsky, manager of MINI brand marketing, says that in spite of an increasingly clutch-free world, about 34% of buyers of the Clubman, the MINI Cooper convertible and the hard top buy the manual version, and that even for the AWD version of the Countryman, MINI’s answer for a crossover, the manual take rate is about 30%. In New England, according to Salkowsky, it’s a 50/50 split between auto and manual, and even in highway-bound L.A. it’s about 15%. That’s a huge percentage, given the national average. AOL Auto’s editor, Kirk Seaman, wrote last year that back in 1985 22.4% of all vehicles sold in the U.S. came with a manual transmission. By 2007, it was 7.7%. AOL Autos says last year it was about 5.5%.

BMW and MINI remain one of the few auto makers committed to making a manual transmission available in their vehicles. Not simply as the economy option for those who can’t afford the auto, but as a performance option for those who want to get the most out of their driving experience. Greenburg mentions the Countryman, which is actually the only AWD crossover in the US market right now that gets better than 30 mpg, costs less than $40k, and has an available manual transmission.

We’ve said it before, and we’re going to keep saying it. If you want to get the most out of your MINI, opt for the stick. Yes the speed and efficiency argument only works when you’re talking about MINI’s out-dated torque converter auto. And when the a DCT becomes an option in the near future the manual will lose on both fronts. But to us it’s not about numbers with a manual. It’s about feel and control and that extra dimension of driving pleasure you don’t get with paddles behind the wheels (all things at the core of the MINI DNA). So it’s great to see that MINI agrees and the press is taking notice. Well done BSSP. This is some of the best work MINI has seen in years.

Check out Greenburg’s full article over at MediaPost, and give BSSP a visit to see their thoughts on the campaign.

MINI Sales Up, Everyone else down

BusinessWeek on the Clubman’s Design