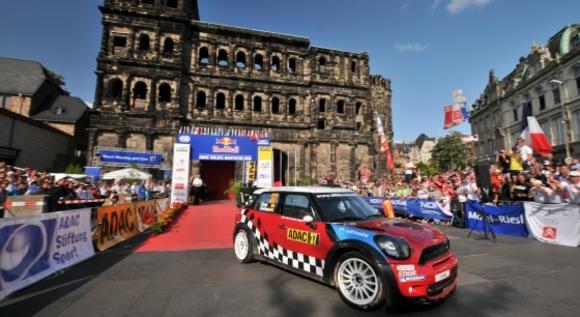 Official News via MINI Motorsports: Strong debut: In Sardinia and Finland, Dani and Kris faced the opposition on gravel. Positive test results had given the MINI WRC Team great hope of good performances on tarmac, too. The fact that the MINI John Cooper Works WRC performed at an almost identical level to its Ford rivals at Rally Germany, and at times even held its own against the Citroen cars, was a positive surprise for all in the team.

Consistently quick: Consistency was the key to success for Dani and his co-driver Carlos del Barrio. The duo ended just 6 of 19 special stages outside the top 5. Their worst finish was seventh on SS12. This was more than balanced out by six fifth places, four fourth places, a third and two second-place finishes.

Within striking distance: On two occasions, the Arena Panzerplatte 2 and Drohntal 2 stages, Dani was only beaten by one of the Citroen drivers. The Spaniard finished just 3.4 seconds behind eventual winner Sébastien Ogier on SS14. Record world champion Sébastien Loeb was just 3.9 seconds quicker than Dani on the 17th stage. Kris completed the fourth stage in third – his best result at this rally.

P3: Dani took the decisive step towards the podium during the first visit to the Panzerplatte. While his main rival Mikko Hirvonen lost over a minute in his Ford, the MINI WRC Team driver produced a flawless drive to clock the fifth fastest time and move into third place overall – a position he was to maintain through to the finish.

Birds of a feather stick together: Dani and Kris were never far apart throughout the entire Rally Germany. Kris was faster than his team-mate on three occasions. Curiously, the MINI duo both clocked exactly the same time of 12:17.1 minutes on the sixth stage, the 19.92-kilometre Moselland section.

So close: Dave Wilcock, Technical Director of the MINI WRC Team, is certain: on the first stage of the third day, Kris would have been on course to set the team’s maiden fastest stage time. Kris and his co-driver Paul Nagle were on hard tyres – unlike Dani and Carlos. The tyres had reached their optimum temperature after about ten kilometres, meaning Kris could attack and was ahead at the splits. However, a puncture shortly before the finish saw him drop back to fifth place.

Number game: A few interesting facts and figures from the Rally Germany at a glance:

– 359 kilometres of special stage were completed by the MINI WRC Team.

– 11 drivers were issued time penalties over the course of the rally.

– About 450 kilometres of barrier tape was used.

– 80 spectator zones were set up, 30 of which had additional public address system and information from eight speakers in four languages.