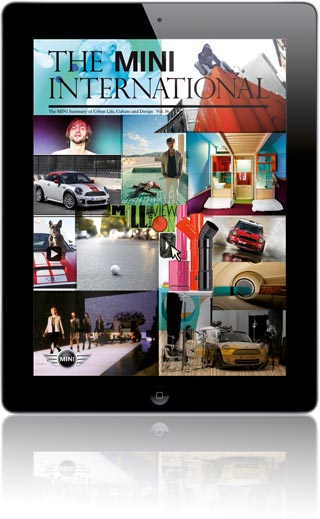 For years new MINI magazines have come and gone. In fact the only one we could ever think of worth handing our money over for (Go MINI) ended production over five years ago. However there has been one MINI magazine that has been there from the start producing not just a look at the brand and its products but high quality lifestyle pieces as well. The official magazine of the brand, MINI International has a long history of catering to the more progressive fans of the brand. The only problem (for those outside Europe) was the excessive shipping costs to actually get one. Now that’s no longer. As of this week you can now find MINI International on the iOS App Store available for the iPad.

Official Release: THE MINI INTERNATIONAL magazine will be released as an iPad app in German and English in the iTunes App Store on 13 September 2011 in time for the start of the IAA International Motor Show.

The MINI INTERNATIONAL app is different. It not only allows MINI fans to experience the contents of the printed edition in multimedia form but also provides a weekly update with all the latest news: a MINI “best-of” from the blogs and websites unlike.net, NOWNESS.com and davidreport.com. These three partners will help ensure that THE MINI INTERNATIONAL app stays exciting and up-to-the-minute.

The app will feature articles from THE MINI INTERNATIONAL with even more pictures, exciting videos and audio-visual streams – as well as weekly bulletins on the MINI brand, lifestyle, culture, art and other topics of interest to MINI fans. The app’s interface concept is based on the printed edition and, like the magazine itself, is also characterised by its aesthetic design. Interesting feeds and an integrated Facebook share function guarantee perfect networking.

A multimedia special that ties in with the international campaign “Another Day. Another Adventure.” will be released to mark the launch of the MINI Coupé, as well as a film documenting the MINI Clubman video art on display at the IAA.

THE MINI INTERNATIONAL print magazine is published twice a year, in March and September. THE MINI INTERNATIONAL application will be released at the same time as the print version and will also be updated on a weekly basis through feeds from partner websites and the official MINI online channels.