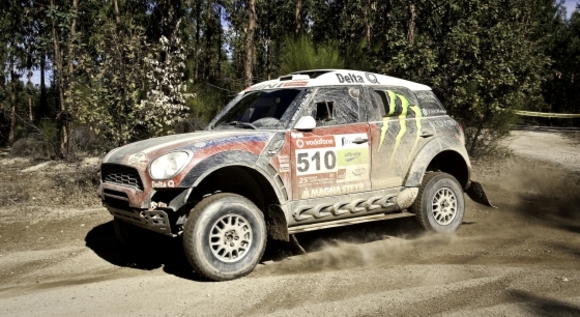 Great news for fans of the MINI “Dakar” racing team. Not only did a Team X-raid MINI Countryman take the checkered flag at the Baja Portalegre 500, but among more than 500 other race entires, MINIs took two other spots in the top ten. As if that weren’t enough, this victory secured the defense of Team X-raid’s FIA World Cup title. With just two months until Dakar — the Superbowl of off-road races — MINI is looking good to make a major run at victory. Official details after the break.

[Official Release] Overall victory, title defence, plus two further MINI ALL4 Racing in the top ten: For the private X-raid Team the Baja Portalegre 500 proved to be a great success as the team prepares for the Dakar Rally.

“Our target is to defend our FIA World Cup title,” said Sven Quandt, team principal of the private X-raid Team, before the start of last weekend’s Baja Portalegre. Over 500 entries came under starter’s orders for the FIA World Cup finale in Portugal, yet none of the teams proved as successful as the X-raid Team.

All the top World Cup teams were present at the event in Portugal which is part of a series of long-distance rallies. Yet none could steal the limelight from the X-raid Team, which had arrived with no less than four MINI ALL4 Racing entries. They faced a single 5,52-kilometre Super Special on Friday, before the event proper, consisting of two timed stages totalling 426,54 kilometres, got under way on Saturday.

“Basically everything will be decided on only one day,” said Quandt. “Thus we need to focus on Saturday.” Which is precisely what all team members did. Filipe Campos and his co-driver Jaime Baptista took on all 95 teams in the car class, winning through to take overall honours in the Baja Portalegre 500.

“This is a fantastic result and a sensational end to the season,” beamed Quandt at the finish, “although we had to fight right to the last stage. However, we have now won the World Cup for the fourth time in succession, which gives us a motivational boost during our final preparations for the Dakar Rally.” A number of MINI ALL4 Racing teams are scheduled to take the start of the Dakar, running from 1 to 15 January 2012.

Equally impressive was the performance of Ricardo Leal dos Santos and Paulo Fiuza: in their home event the Portuguese duo drove the third X-raid Team MINI ALL4 Racing to fourth place. The second Portuguese team, namely Bernardo Moniz da Maia and Joanna Sotto Mayor, finished in eighth place to seal an extremely successful weekend for the X-raid Team in Portugal.

Now MINI fans have the appearance of the X-raid Team in the Dakar Rally to look forward to. Less than 60 days remain to the start of arguably the world’s toughest rally…