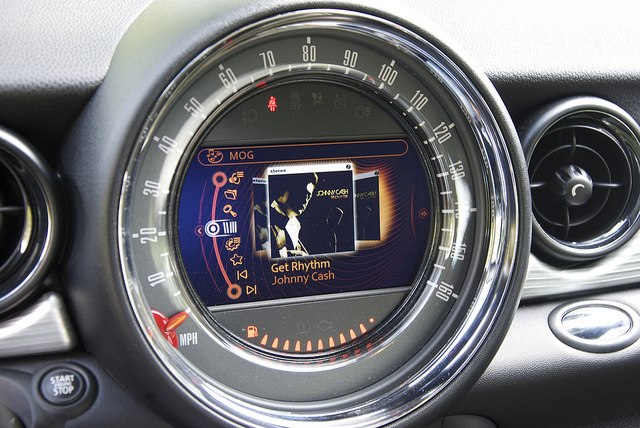 Back in September during the MINI Coupé press launch in Nashville, I got to drive several Coupés with a variety of specs. There were JCW cars, regular Cooper S Coupés and a variety of colors to choose from. What each car had in common, however, was MINI Connected w/Nav, and a MINI-supplied iPhone with a pre-release version of the MOG app installed. While I wasn’t previously aware of MOG’s on-demand music service, its main rival, Spotify, had just launched in the US a few weeks earlier. So I was at least familiar with the concept. Additionally, this was my first real chance to use MINI Connected for an extended period of time, so I didn’t have any pre-conceived bias as to how it should or shouldn’t work.

While they weren’t on my radar, MOG actually started in 2005 and had an iPhone app before they partnered with MINI to integrate into MINI Connected. Additionally, MOG is one of the first 3rd party apps to come to MINI Connected since its debut last year. Like the Pandora app, this new version of the MOG app relies on the iPhone for data connectivity, but allows listeners to access the app’s functions without having to fiddle with their iPhone.

Now I’m not going to get into how MOG compares to Spotify, or Apple’s iCloud, or any of the myriad other ways you can you can get your tunes through your mobile phone. What I’m going to focus on instead is what it was like to use MOG as integrated into MINI Connected.

Basically, it was extremely easy.

With the MINI-provided iPhone plugged in, using MOG was just like using any of the other audio sources already available through the MINI Connected interface. Once connected, MOG appeared on the screen as a source like satellite radio, CD or music stored on my iPhone. Since I was in Nashville, it only seemed appropriate to play some Johnny Cash as I got to know the Coupé. Because MOG uses the MINI Connected interface, I was able to use the text selection wheel to search for Cash, then choose an album. Ring of Fire, obviously. Playback started within two to three seconds — about as long as it takes a CD to find a track and start playing. (For those who don’t know what a CD is, ask your parents.) Music quality was good, especially mated to the H/K speakers. Even though I was driving in areas both rural and urban, I never experienced any buffering pauses or skips in playback on the Verizon iPhone they’d included in the car.

I listened to the whole album, and this included a few stops. MOG paused and resumed what I was listening to without being asked. My only quibble with the experience was that once I got to the end of the album, the app simply replayed the last track over and over. While not a bug (I don’t think) it seemed like a strange choice. Still, it’s a minor thing and the current app may behave differently.

Oddly, it was my own iPhone that actually informed my experience with MOG most of all. I had some specific music of my own I wanted to listen to (music I looked for first on MOG but didn’t find), so I unplugged the MINI-supplied Verizon iPhone and plugged in my own. Accessing the music I wanted on my own device was exactly the same experience as finding and listening to music on MOG. That’s where it clicked. By integrating into MINI Connected, MOG has put the cloud in your car stereo and there are no extra hoops to jump through. There’s nothing to fiddle with. Just log into the iPhone app, plug in, and off you go. Easy. I like easy.

So if you’re one who likes a music-on-demand service such as Spotify or MOG, and you spend a lot of time in your MINI, the MOG app for MINI Connected might be just what you’re looking for. More than anything, my experience with the app simply reinforced our opinion here at MotoringFile that MINI’s future-proofing strategy with MINI Connected is bang on. With the platform now open to third party apps, the best is yet to come. Meanwhile, MOG is another high quality arrow in the MINI Connected quiver.

The BMW M3 SMG Vs. The MINI Cooper/S