We’ve known it was coming for awhile. We had even predicted exactly when we’d see it’s debut and eventual launch. But it doesn’t diminish our excitement in seeing it close to production ready condition. But what are we seeing and what should we expect when it’s launched at MINI United in early May?

Read on for the details.

Conceptually GP2 will follow the formula that proved so successful with the first GP. That means slightly more aggressive bodykit that the standard JCW version and a MINI Challenge inspired rear wing outside made from carbon fiber reinforced plastic as before. We will also see unique 18″ wheels and a lowered stance thanks to the standard JCW suspension. The biggest addition to the exterior over the first GP will be a MINI Challenge derived functional diffuser that reduces lift over the rear axle of the car.

While it’s not confirmed we expect this GP, like the old, will be available in one color with red accents.

Inside things will be simple. Like the first GP we will see no rear seat. In its place will be a cross-bar (perhaps functional this time) with a carpeted floor covering that replaces the rear seats. For seating expect Recaro seats (finally available in the US) and unique trim and badging on the dash.

While the the previous GP was shipped unfinished and hand assembled in Italy by Bertone, we expect MINI to go a different route with the GP. This could allow for the GP to be more uniquely configured as compared to the one spec for all approach of the original.

The GP will debut at MINI United this May and could even make its way to the US for MTTS. Officially the car will make it’s final production debut at the Paris Motor Show this September with production commencing around the same time. Expect the first delivering around the October timeframe. 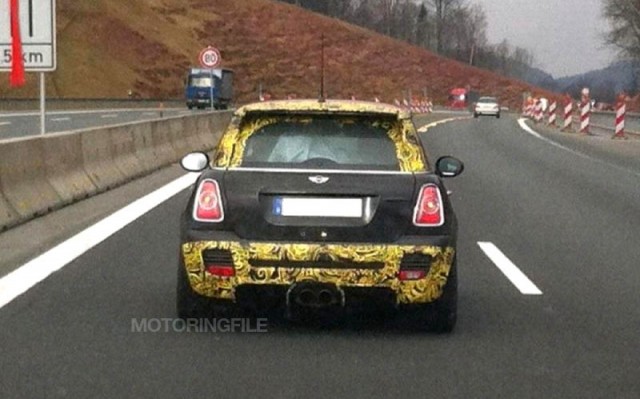 Video: JCW GP Makes its UK Debut at the Goodwood Festival of Speed

The MINI JCW GP Concept Video – Our Best Look Yet