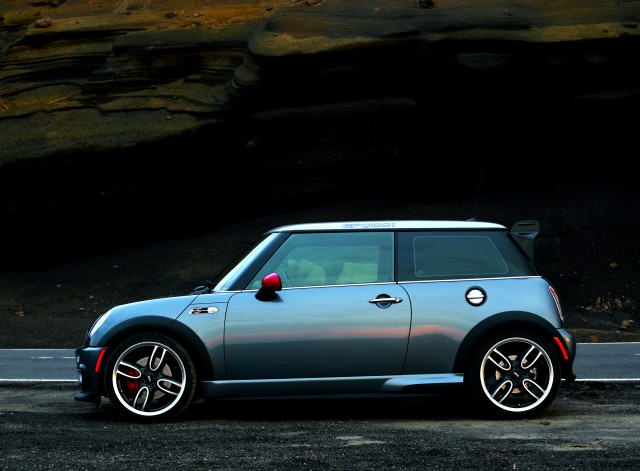 Last week we broke the news that MINI is planning on turning the GP name into a high performance sub-brand for MINI and to a lesser degree JCW. But what does this mean and when should we expect it? Read on for the details on the full range of GPs and when we should see them on dealer lots.

MINI is currently developing two GPs on the ‘Ring and at BMW’s relatively secret test track in southern France. The first to debut (this May at MINI United and on-sale in September) will be the R56 based GP. The car will be patterned after the original GP with weight reduction (mostly via removing the rear seats), more power (at least 220 hp) and standard JCW suspension. Also of note will be a unique wing (imagine the previous GP wing slighty tweaked) and a massive rear diffuser. Inside things will be simple with an eye on weight reduction similar to the original. The second of these two will be the R58 Coupe GP. The Coupe will feature the same engine and suspension modifications, a few areas of weight reduction plus the aero found on the R56. It may get a fixed rear wing but that’s still up in the air (no pun intended). It’s unclear when we’ll see the Coupe GP but it’s our guess that MINI will stagger the release and debut the car this fall with sales starting in the spring of 2013.

The second pair of GPs will come at least a year later and will be based on the R6X platform. First up will be the R60 Countryman and then the R61 Countryman Coupe (formally known as the Paceman). Little is known about these cars but we can make some solid guesses based a few whispers we’ve heard. Expect at least the same power as we’ll see in the R56 and R58 GPs and much more aggressive JCW suspension. Also expected will be a new aero-kit and set of 19″ wheels. What is not know is how MINI will achieve (if any) weight loss on cars that are meant as much for utility as driving pleasure.

We will have much more on the new line in the coming weeks as we get closer to MINI United.