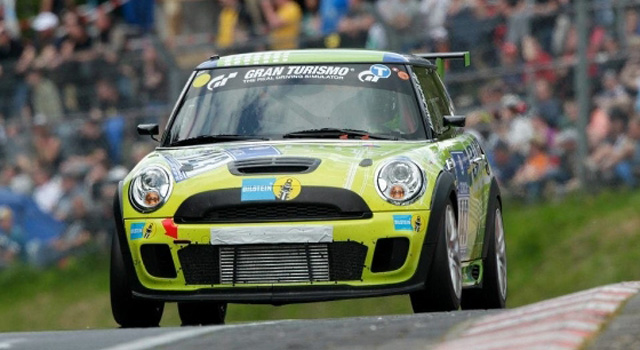 Partl Motorsport had the perfect weekend of racing at the Nürburgring 24 Hours, putting in a top performance that made it the only private team to take a MINI across the finishing line.

[Official Release] In the official results of the 2012 Nürburgring 24 Hours, position 41 is marked as “No Name”. But that’s not to say that the team that came 41st, which is also the only team to have successfully finished the world’s toughest circuit race in a MINI this year, is an unknown team. That team is Partl Motorsport, which entered the race with its MINI number 143. Nobody knows why the team’s name is missing – perhaps Rainer Partl’s team had more important things to do ahead of the race than get tied up in bureaucratic formalities. Anyway, what’s in a name when you’re wholly focused on getting ready for the race then rising to the challenge of racing around the Green Hell – two disciplines that Partl Motorsport truly excelled in at the weekend.

The team’s MINI #143 started the 40th edition of the 24-hour race in 96th position in a field of 169 starters on Saturday afternoon, and went on to gradually gain ground lap after lap, for an excellent 41st place at the end of the race. Meanwhile, the private MINI teams s.i.g. Motorsport, Schirra motoring and Besaplast all suffered at the hands of the classic Nordschleife track and failed to finish the race. “We had a great race,” says team manager Rainer Partl, “even though we only decided to enter the Nürburgring 24 Hours at the end of 2011.” Partl Motorsport’s main sponsor, Hermann Bock, kept bringing up the topic of endurance racing. As a former rally driver himself and also a passionate motorsport fan, Bock finally wanted to make his dream of participating in the 24-hour race on the Nürburgring’s Nordschleife come true. And with the experienced Partl Motorsport team and the MINI brand, it looked like all the parameters were finally right for him to be able to do just that.

Partl Motorsport has been competing in the MINI Challenge Germany for years. And Partl Motorsport is also currently competing successfully with two MINI cars in the MINI Trophy series initiated in 2012. “Having competed in the club series, we know what the MINI is capable of and are familiar with the vehicles down to the very last screw,” says Partl. “We therefore decided to convert last season’s MINI John Cooper Works Challenge for use in the Nürburgring endurance race.” The technical modifications needed were implemented with the help of the team’s sponsor. But it was important to Rainer Partl that the MINI look be left untouched. “We wanted the MINI to remain a MINI, so no changes were made to its appearance. Our aim was for our MINI to be as cool as it ever was,” the team manager says. Rainer Partl’s son Felix was responsible for the car’s conversion as chief mechanic, while his second son, Max, contributed his experience as a driver in the MINI Trophy series and took to the wheel of the MINI #143 for the Nürburgring race. He was joined by Jörg Weidinger, who has likewise had plenty of experience in the MINI Trophy series. And the third place in Partl’s Nürburgring team was, of course, reserved for Hermann Bock, whose dream of racing on the Nordschleife was the reason for the entire project being initiated in the first place.

The dream’s not over yet.

When it came to the race itself, it was more of a walk in the park for Partl Motorsport than a trip through the Green Hell. “Right from the start, we made sure we left nothing to chance,” says Max Partl. “We have a philosophy of replacing everything that can possibly be replaced, just to be on the safe side.” The team therefore lined up for the race in what was essentially a new car – something which soon paid off. “We didn’t experience a single defect in our MINI throughout the whole of the race, with every part doing its job properly,” says Partl junior. “Our turbo may have been glowing red with heat throughout the race, but we didn’t even drop a torch or anything.” 58 cars failed to finish the race or couldn’t be given a time, but Partl, Weidinger and Bock reliably performed lap after lap until they finally crossed the finishing line, having conquered the Green Hell and fulfilled Hermann Bock’s dream. All in all, it was the perfect weekend of racing on the Nürburgring for Partl Motorsport.

So what’s next for the successful MINI? “No idea!” says Max Partl, shrugging his shoulders. “Hermann Bock has said he first wants to mull over the idea of taking part in some more endurance races.” Then, with an impish grin on his face, Max Partl explains how, while driving home from the Nürburgring, he was looking for something in the team bus’s glove compartment. “I found myself holding a piece of paper,” says Partl, “and when I took a closer look at it, I realised it’s the registration form for the 24-hour race in Barcelona in September.” So perhaps there’s more to come in Hermann Bock’s dream.