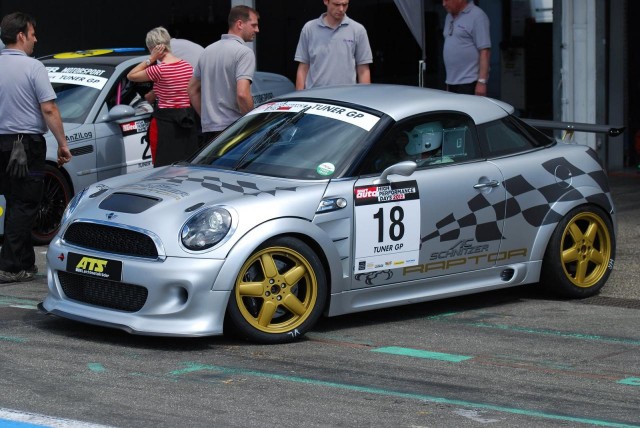 German tuning company AC Schnitzer has built a racing car based on the MINI JCW Coupe. Dubbed the Raptor, AC Schnitzer have released a video of the car claiming it to be the world’s fastest MINI. While on its face that’s a bit of an outlandish claim, the results seen in the video (after the jump) are pretty compelling.

According to World Car Fans, the race shown in the video is the 2012 Tuner Grand Prix hosted by Sport Auto magazine. In the mix was a variety of high end sports cars. From Ferraris to Porsches, and even supercars like the Pagani Zonda. Also in the mix was another JCW Coupe fielded by AC Schnitzer. But how did their Raptor hold up in such a thick pack of thoroughbreds? The Raptor turned in a lap time of 1:11.6, beating both a Ferrari 599 GTB and a Porsche 911 GTS. The Raptor took the Porsche by more than a second. The Raptor also took the track at just .8 seconds behind the pace of a Pagani Zonda, which is one of the fastest cars in the world.

It goes to show once again that MINIs have motorsport in their blood. Yet it wasn’t a stock JCW Coupe out on the track by any stretch. Significant upgrades to both engine and suspension helped move the car along.

The Raptor’s engine power has been increased from 211 PS (155 kW / 208 bhp) to 300 PS (221 kW / 296 bhp) thanks to new engine management, turbo and intercooler as well as a stainless steel exhaust system with racing catalyst. Other items include a sport clutch, limited slip differential and lightweight ion battery. Naturally, a racing suspension was added with antiroll bars and a roll cage while weight savings are made with carbon fiber components used in place of the hood, door panels, luggage lid, rear diffuser and rear wing.

While obviously a full-on racing vehicle, it’s a great indication of just what the MINI Coupe platform is capable of. The stiff chassis and improved aerodynamics (say what you like about that roof, it’s slippery) make the Coupe an ideal motorsports platform. I would guess we’ll only see more and more hot Coupes in the future.