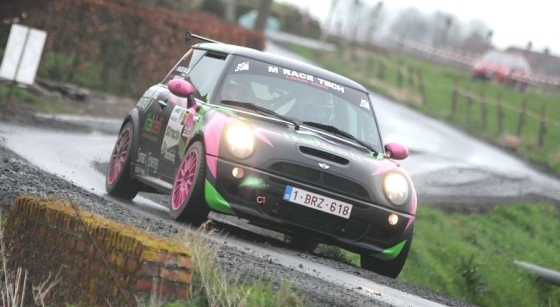 [From MINI Motorsport] Even as a four-year-old, Vicky Van de Walle knew one thing: she wanted to be a rally driver. The Belgian became a co-driver at 17 and moved into the driver’s seat of a MINI in 2010. A dream come true.

Vicky Van de Walle caught the rally bug at the tender age of just six months. Back then the young Vicky used to travel with her parents to watch her mother’s boss in action in local rallies in Belgium. Vicky was immediately hooked on the roaring engines and the sight of the cars flying past. At four years old, she made a telling entry under the heading “Dream Job” in her friend’s friendship book: rally driver. Her first outing as a co-driver at a rally came when she was just 17 and actually needed her parents’ approval, as she was still a minor and did not yet have a driving licence. Then, in 2010, Vicky’s dream came true when she started a rally behind the wheel of the car for the first time. Her car? A MINI Cooper S modified for rallying.

“A MINI was an obvious choice,” says Vicky, who works at a MINI dealership when not busy rallying. “Ever since I have always been addicted to MINI.” It was her boyfriend – himself a rally co-driver in Belgium – who told Vicky that she should finally get behind the wheel of the car. Vicky gave it a try and took to it like a duck to water. So much so that there was no way she was going to return to the passenger seat. Since then, Vicky shares the cockpit with her co-driver Nathalie Verschuere. Why not with her boyfriend, as he is also an experienced co-driver? “I always wanted an all-female driving team,” says Vicky. “This was something completely new, and my boyfriend helps me as the team’s head mechanic.”

“Girl Power” in a MINI with pink rims.

Vicky’s all-female team is well received by the fans. “Girl Power” is a common theme among the comments made on her Facebook page. And her black MINI Cooper S, with over 220 horsepower and pink rims and go-faster stripes are not only popular with female fans. “Impressive”, “Excellent” and “Go, Vicky!” can be read on her profile – posted by men and women alike. Vicky has long since proven her driving ability. She recently finished in an excellent eighth place at the Leptines Rally in Belgium in May.

That was just the seventh start of Vicky’s career. And the conditions, in which she claimed eighth place, were anything but easy: heavy rainfall had turned the majority of the special stages into vast muddy landscapes. On top of this, Vicky was also struggling with a bad cold. However, she was not going to allow any of that to knock her off course. In contrast, Vicky is 100 per cent fit for her next outing. This weekend she will take a trip into the neighbouring Netherlands, where she will take part in the “Exotic Green Rally”, which forms part of the Dutch Rally Championship and features a field of over 60 teams. Vicky’s fans all have their fingers crossed for her – particularly the friend, in whose friendship book Vicky wrote when she was just four. Vicky is still in close contact, via Facebook, and the friendship book is still a prized possession.

MINI JCW Team Back in Action at VIR