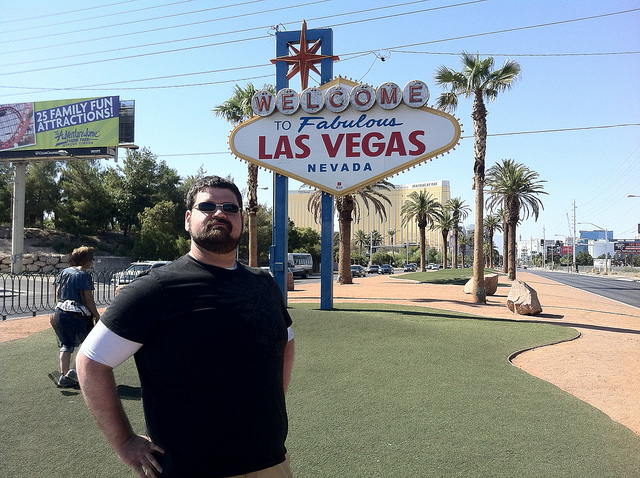 When I stepped off the plane in Las Vegas, my first surprise was the five-deep bank of slot and video poker machines ringing and dinging their happy songs into the airport terminal. Right. Gambling. I thought to myself. This was my first time in Vegas. Thankfully, I’d picked a great event at which to lose my Vegas virginity. I was there for AMVIV 9 — A MINI Vacation in Vegas — and though my own MINI was 1,800 miles away in Chicago, there was a Velvet Red 2002 Cooper on its way to pick me up. My driver was none other than Don Burnside; White Roof Radio Founder, MotoringFile Technologist, AMVIV veteran and all-around swell guy.

As I waited for DB at the airport departures curb, I took in the feel of the place. You can definitely feel Vegas. You feel Vegas on every inch of your skin thanks to the surrounding desert. My iPhone said 101º F and it felt every bit that hot. But as they say, it was a dry heat. I kinda liked it. There’s something refreshing about the desert heat. That is, so long as you’ve got some shade. The departures ramp afforded me that for now, and as soon as DB arrived in his Cooper, I had shade on the go. Meeting the infamous Roxy was, for me anyway, just as exciting as meeting any of the other available celebrities in Las Vegas. This car is infamous as far as I’m concerned. This Velvet Red ’02 MINI Cooper is the car that launched a thousand podcasts. Well, 400+, but you get the idea. At just over 260,000 miles, DB’s little British chariot is testament to how determination, regular maintenance and sheer will can keep a MINI going indefinitely. As we zipped down the onramp onto the highway and into the desert sun, DB’s MINI growled and snarled like the little race car it is. Those of you who think you need a Cooper S to drive fast are wrong. Dead wrong. DB delivered me to where the action was: Palace Station. Just across the highway from, and overlooking The Strip, Palace Station is a slice of “old Vegas”. Or so I’m told. I’m new here, remember? But I believe it. It’s definitely old school. You wouldn’t know it to look at the building from outside, but Palace Station is strangely labyrinthal. There’s the tower above, the casino below, the courtyard rooms beyond, and the parking garage adjacent. It’s all there, and all connected. If you wanted, you’d never have to actually leave Palace Station. Eat, sleep, play and take in Louie Anderson’s show, if that’s what you’re into. For AMVIV though, the action is in the parking garage.

You read that correctly. The parking garage. Trust me, it’s much better than it sounds.

The penultimate floor of the Palace Station parking garage was quartered off specifically for AMVIV. I’d arrived for the event’s first real day, and already there were MINIs and Minis throughout the garage. The Sin City MINI Club had their registration booth up and rocking, and there were venders throughout that level of the garage selling and installing their wares. In fact, when I arrived White Roof Radio host and Motoring Badges front man, Todd Pearson, was in the middle of covering the roof of a BRG2 Clubman S in one continuous piece of white vinyl. The end result was stunning. You’d never guess it wasn’t paint. Better yet, it really brought out the green in the body color. The parking garage would later serve as party venue, charity dunk tank locale, and throughout the event, it served as much-needed shade for those gathered to see what the vendors had to offer, and those gathering up to go on a run. The best thing about AMVIV, aside from the fun people who attend, is just how a la carte it is. There are official runs (group drives to particular destinations like Hoover Dam or Death Valley), and official events like the car show and the vendor party. Go to all of those events, or go to none of them. It kind of doesn’t matter. It’s choose your own adventure with Las Vegas as your playground and fellow MINI enthusiasts as your playmates in the Mojave sandbox. Best of all, this casual approach lets AMVIV be in practice what it is in name: a vacation. You can go to AMVIV and just hang out by the pool if you want to. Read a book. Watch the Discovery Channel in your hotel room. Pull a slot machine or two. Go for a drive. Have a cocktail. (In that order!) It’s whatever you want it to be — four days of play time carved out of the normal routine of life, with leisure and indulgence your only priorities. Because of AMVIV’s as-you-like-it nature, my personal experience was exactly that: my own. For me, the highlights were three fold. First, seeing everybody show up throughout the event and be proud of their MINIs and Minis. Or at the very least, be there sans car (like me) and be proud to be a MINI fan. Second, it was all the time spent eating, drinking and being merry with everybody who’d turned up. The AMVIV party never really stopped, it just changed locations depending on the time of day or night. Fast friendships formed over gigantic vessels of Guinness and fresh plates of terrific food. Like any good MINI event, the common ground is already there. What kind of MINI do you have? When did you get it? Where did you come in from? My third AMVIV highlight was when DB and I set off in Roxy for an in-prompt-to night cruise of the Vegas Strip. I had a schedule conflict with the formal, mass MINI strip cruise the night before, so it was good to get out there and see the sights from the window of a MINI. With DB’s help, I felt like we’d done AMVIV right — that my first trip to Vegas was everything it should have been. We had fun, we stayed out of jail, and we stayed in our primary relationships. Score!

When the ninth AMVIV finally wrapped up at the Saturday night pool party, I must admit I was utterly charmed. Both by the event itself and Vegas in general. I stuck around until Monday to catch a cheaper flight out and that gave me a non-AMVIV day to wander around Vegas a bit. This I did with a buddy of mine who lives there now. We visited Gold & Silver Pawn, the store featured in the History Channel’s Pawn Stars. It’s much smaller inside than I expected, and there was much less interesting stuff in there than I had hoped. We then headed over to the Rio to catch Penn & Teller. Terrific show. Can’t recommend it enough. Looking back, AMVIV was not simply another great MINI event like The Dragon, MINI United or MINI Takes The States. AMVIV is a great excuse simply to get to Vegas. It lives up to its name as a terrific way to escape the drag of one’s normal routine. So if you’ve ever considered it, or even if you haven’t, I must strongly encourage you to take the time off next year. Go have yourself A MINI Vacation in Vegas. I’m glad I did.