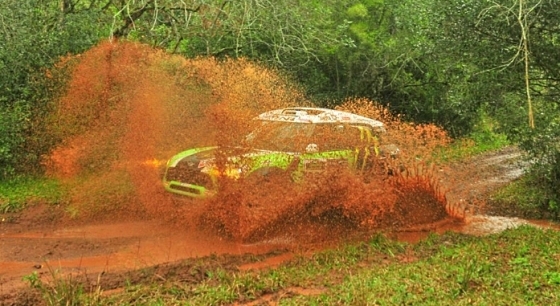 Shortly before the end of the Desafío Litoral in South America, Nani Roma of the X-raid Team is required to push to the limit with his MINI ALL4 Racing in order to score a perfect overall victory.

Stage 5 of 6:
As the finish of the Desafío Litoral, the rally contested on the Argentina/Brazil border, beckons, the event enters a decisive phase. The fifth stage, which circles Corrientes before heading back into Corrientes, is the fastest test of the rally – but certainly not the easiest. 292,88 timed kilometres feature on the day’s schedule, with the drivers facing constantly changing conditions, various fast sections, and an extremely complex route in parts. Crews who fail to diligently follow the highly detailed route book run the risk of going off-route, and failing to make the day’s target – something Nani Roma, 31:39 minutes adrift of the leader, Argentine Orlando Terranova, can ill afford after recording the third-fastest time on the fourth test. Therefore Nani needs to make up for lost time in his MINI ALL4 Racing, as the final stage before the finish Resistencia is short – and thus offers little opportunity of reducing the deficit.

Stage 4 of 6:
Third place for Nani on the third day after the organisers were forced to cancel the third stage due to mist. Over the 427,1 competitive kilometres stage, Nani posted the third-fastest time behind Orlando Terranova and Chile’s Boris Garafulic. Thus Nani was forced to relinquish first place overall to Terranova.

Stage 3 of 6:
No activity on the Desafío Litoral after the organisers were forced to cancel the third stage for safety reasons after the helicopter proved unable to take off due to misty conditions. Thus Nani maintained his overall lead for another day.

Stage 2 of 6:
Nani leaps to the sharp end of the overall classification, having headed into the second day with a deficit of 28 seconds on Orlando Terranova before converting it into a lead of 1:34 minutes. Heavy rain had forced a reduction of the scheduled stage to 195 kilometres.

Stage 1 of 6:
A solid but not entirely trouble-free start in the Desafío Litoral for Nani and the MINI ALL4 Racing. Due to a punctured tyre Nani loses time, eventually placing second overall behind Orlando Terranova. The good news for Nani: Just 28 seconds separate him from first place with five stages to go. Thus the second-placed driver on the 2012 Dakar Rally has no reason for concern.