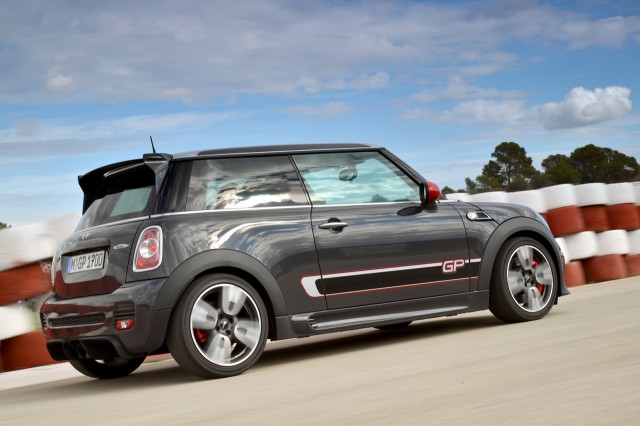 With the new GP, MINI followed a template created with the 2006 original. Crucially that meant starting with the standard MINI hatch as a basis for the new car. Yet we (and a number of our readers) have rightfully asked, why not the coupe? We posed that same question to MINI Design Chief Anders Warming, GP Product Manager Jorg Weidinger and the Head of MINI Marketing Dr. Kay Segler while in Mallorca test driving the car. The answer fell into two categories: expected and surprising.

To start with, Anders Warming admitted to the fact that they looked at the Coupe as an option. But interestingly they found that the standard Hatch is actually more aero efficient and has less lift at speed. Furthermore the height of the roof allowed them to place the rear wing higher and reduce lift further. In order to achieve the same results in the Coupe the rear wing would have to be roughly equal to the height of the roof – not exactly a subtle addition to the car. They felt that it wouldn’t have fit the MINI’s image.

However when pressed Anders Warming didn’t completely rule it out as the term “at this time” was used more than once.

In talking with Dr. Segler and Jorg Weidinger they also had several reasons why the Coupe didn’t work as the GP this time around. History was their guide and that meant the hatch had to be the basis of the car. Additionally the hatch represented the best donor vehicle as it has less curb weight and more opportunity to lose weight further. With the Coupe there’s really only so much that you can do to minimize the weight gain of the various GP components (i.e. brakes seats etc).

Will we see more GPs in the future? We’ve heard in the past that MINI has investigated making the GP a range of cars rather than a single model. And given the engineering that went into the R56 it seems logical. But it also seems that MINI isn’t willing to water down the storied GP name unless all the ingredients are in place.

Details Behind the Cold Start Fix