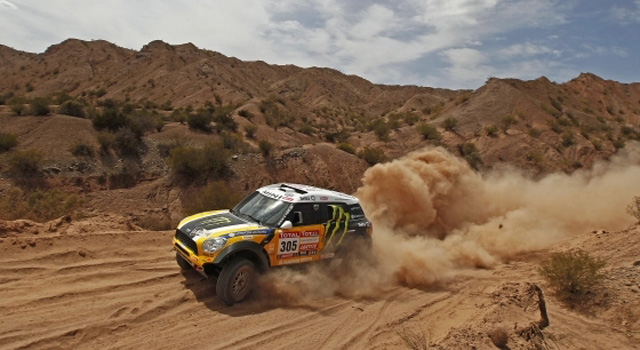 Official Release: Having dominated the 2012 Dakar, it now comes face to face with its biggest challenge once again: to master the toughest rally in the world.

When the 2013 Dakar Rally gets underway on 5th January, Nani Roma will be making his 15th appearance at the toughest rally in the world, making him one of the most experienced drivers in the field. The Spaniard’s biggest success at the Dakar to date came in 2004, when he won the motorcycle class. One year later he switched to cars and immediately finished sixth at the first attempt.

In 2012, Nani lined up in a MINI ALL4 Racing for the X-raid Team, finishing runner-up behind team-mate Stéphane Peterhansel – his best Dakar result so far on four wheels. In an interview, the 40-year-old talks about his preparations, changes to technical regulations, his goals, and the unique challenges posed by the 35th Dakar.

Question: Your first appearance in a MINI ALL4 Racing for the X-raid Team since the 2012 Dakar came at the Desafio Litoral in July, when you finished runner-up. What did you get up to between the end of the 2012 Dakar and then?

Nani Roma: In February I was involved in testing the car in Dubai, in order to be prepared in good time for the modifications to the technical regulations for the 2013 Dakar. After that I drove in the Spanish Rally Championship. After my success at the last Dakar, I also had a number of international PR appointments. Then came the Desafio Litoral, which, at about 1,600 kilometres in length, was another good test with the new engine. I only finished second, but it was good to be able to check out different technical set-ups on the car.

Question: The International Automobile Federation (FIA) has changed the technical regulations for the 2013 Dakar. One of the effects of the changes is that petrol cars are now more powerful than diesel cars. What do you make of the changes?

Nani: This Dakar will certainly be different to the last one, but the engine in the MINI ALL4 Racing is reliable and powerful. Our team has completed more test kilometres with the MINI ALL4 Racing than ever before. We know what the MINI is capable of. When it comes down to it, the changes the FIA has made to the technical regulations are aimed at ensuring an even competition, which makes it more exciting.

Question: The route of the 2013 Dakar is in the opposite direction to last year. There are also a number of new stages. What is your opinion of the route?

Nani: The Dakar is always unpredictable. This time the opening days will be very tough, as we head straight into the Peruvian dune stages around Pisco, Nasca and Arequipa. Then we have a few stages that were on the rally last year, but there are always changes to the route, meaning you can never count on anything at the Dakar. You must always remain fully focussed and prepare for every stage as though you are driving it for the first time. It only takes one mistake to bring your Dakar to an end.

Nani: I won the Dakar in 2004 and would obviously like to win it again in a car. However, the Dakar is long and unpredictable. As such, my first goal is to get off to a good, concentrated start and avoid mistakes. If you can manage that, you put yourself in a good position for the rest of the race. Then you just have to prepare one stage at a time and try to maintain your position. Obviously everyone wants to win, but there is no point in thinking about the finish at the start of the race. Too much can happen over the course of the race.