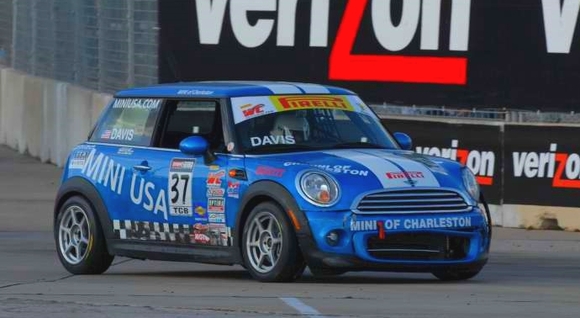 Official Release from MINI USA: Robbie Davis won the Touring Car B-Spec Championship in the Pirelli World Challenge Championship in his MINI Cooper, run by the MINI of Charleston Racing Team. The American, who since 2007 has lined up in numerous series with a modified MINI Cooper S, produced a courageous performance in his adopted home of Houston. He refused to be denied by a crash and fought back to finish in the points while his closest rivals faltered.

The Houston Grand Prix in the American IndyCars series provided a fitting setting for the finale of the Pirelli World Challenge season. The street circuit in the Texan metropolis is a genuine challenge. The cars brush the concrete walls, meaning drivers cannot afford to make any mistake.

MINI driver Palmer wins both races
Davis discovered for himself just how quickly things can go wrong on the winding circuit. Repair work had to be performed on the track surface overnight, making it extremely dusty and slippery. Robbie spun his MINI Cooper shortly after the start of the race, ending up facing across the track. Fellow title contender Ernie Francis Jr. was unable to avoid the stricken MINI, making contact and then careering into the wall. Retirement for Francis Jr.!

Davis set off in pursuit in his slightly damaged MINI, clocking the fastest lap as he fought back from 19th to finish in the points in eighth place. And MINI had more reason to celebrate: Californian Tyler Palmer crossed the finish line first.

Robbie Davis started the second 25-minute race from eighth on the grid, and made up one place over the course of the race. Rival Francis Jr. did return to action in a new car, but could only manage eighth behind Robbie. Davis claimed the title finishing 30 points ahead of Joel Lipperini and 37 points ahead of Francis Jr. It has been a successful season for Davis, who won three races, claimed eight podiums and set the fastest race lap on four occasions. And it was to get even better for MINI, with Palmer also winning the second race in Houston in his MINI Cooper.