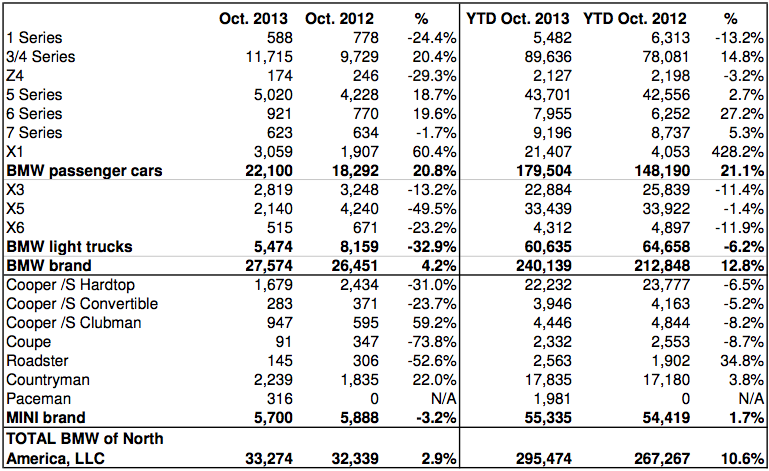 MINI USA is reporting sales down by -3.2% for October of 2013. This in an otherwise record-breaking year of sales for MINI here in The States. Year-to-date sales remain positive, with a +1.7% gain over 2012. Sales of certified pre-owned MINIs, however, were up +30.4% this October as compared to last. As final R56 allotments are fulfilled in preparation for the launch of the F56, some sales fluctuations seem reasonable.

The most interesting detail is that Countryman sales outpaced the Hardtop Hatch by about a third. Granted, this is likely tied to R56 production ramping down, but it’s an interesting detail nonetheless. Also of note are Coupe sales, which are down -73.8% year-over-year. By model, all the MINI variants were down significantly in sales this month with the exception of the Clubman and the Countryman, which saw +59% and +22% growth respectively. Or put another way, the Clubman and the Countryman carried the brand on USA sales this month while supply of the Hardtop contracted. Official remarks and info from MINI follow.

MINI Pre-Owned Vehicles
In October, MINI used automobiles (including MINI NEXT certified pre-owned and pre-owned) continued its year of record breaking, smashing last year’s October sales with an increase of 30.4 percent to 1,962 vehicles from 1,505 sold in October, 2012. January through October, MINI used vehicle sales are up 19.1 percent on volume of 18,143 compared to 15,233 in the same period of 2012.