We’re just a few days into 2014 but we already have a clear picture of of the next 18-24 months for MINI. Read on for the complete rundown of the next two years. It’s an inside look at what will see and when we’ll see it. 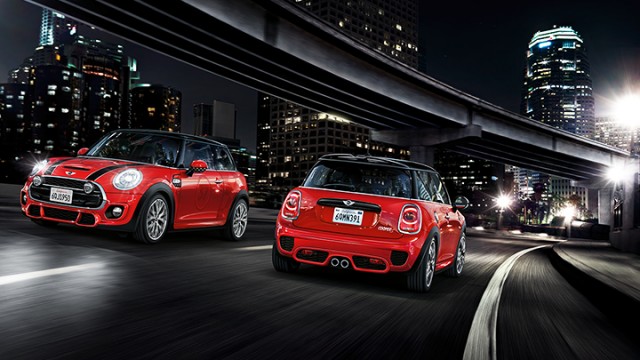 The F56 will see ramp-op with a number of options beginning with March production. Notably these should include several JCW options including the appearance package seen above. The package will come with JCW wheels, aero-kit and a number of other JCW bits and pieces inside and out.

With the F56 months away from being on sale, MINI is turning it’s attention on it’s next model expected to debut later in 2014. The F55 will likely be marketed simply as the four door MINI and will introduce a sleeker roof-line, longer wheelbase and much more versatility.

The 2015 MINI four door will debut in the fall of 2014. Details have yet to be worked out but expect a roll-out to be slightly compressed in compared to the F56 – meaning it should hit the US before the spring of 2015.

One of the models we’re most excited about is the re-imagined Clubman. Where the F55 is all about being as small as possible with four doors, the Clubman stretches things out with an eye on increased utility. As you can see above 2015 Clubman will be lengthened and widened to Countryman proportions. This will allow for 2+3 style seating with easy access via two forward hinged rear doors. Exterior and interior details will be very similar to the soon to be released F56 albeit tweaked and stretch.

These changes were made possible by the F55 five door MINI and the increased market for small four door hatchbacks.

The Clubman will keep it’s iconic club doors in the rear but will lose it’s single “coach door” on the right in favor of two traditionally opening doors. This was done both due to customer feedback (especially in right-hand drive markets) and also safety concerns. In side impact crashes having a B-pilar is good thing.

Inside the rear legroom grows to Countryman levels while increased width will allow for three across seating as standard. The size of the boot is also increased dramatically in length, width and under the floor. One note about the rear club doors, MINI will be again hinging them on the corner of the car to allow for greater load angles. However unlike the current Clubman the lights will be integrated into the club doors and will be very similar to the Paceman’s in shape.

Based on the UKL platform, the F54 will carryover all drivetrains from the F56. What about all wheel drive? After our interview with Oliver Friedman head of MINI Product worldwide, we know we won’t see AWD on the F56 or F55. However sources are telling us that the F54 Clubman may be a very different story. We’re hearing that AWD will eventually show-up on the Clubman.

The F57 will be an exact copy of the R57 with the same top with only very minor revisions. Basically an F56 hatch with the R57?s convertible top. We expect the debut to take place at Geneva 2015 with a launch later that spring or summer.

The JCW concept that will debut at NAIAS in two weeks is a visual preview of the JCW that will go on sale in the spring of 2015. It will be front wheel drive but put much more power down to the pavement. JCW knows that they have to up their game dramatically to remain relevant as more ad more hot-hatches enter the marketplace. Outright speed will be important but so will overall performance. Much like the R56 GP MINI will be looking at future JCW models from a holistic perspective and not just as a MINI with an powerful engine and bigger brakes.

Standard will be exclusive aero, plenty of JCW equipment and of course plenty of extra performance.

The 302 HP JCW Countryman and Clubman To Launch This Summer