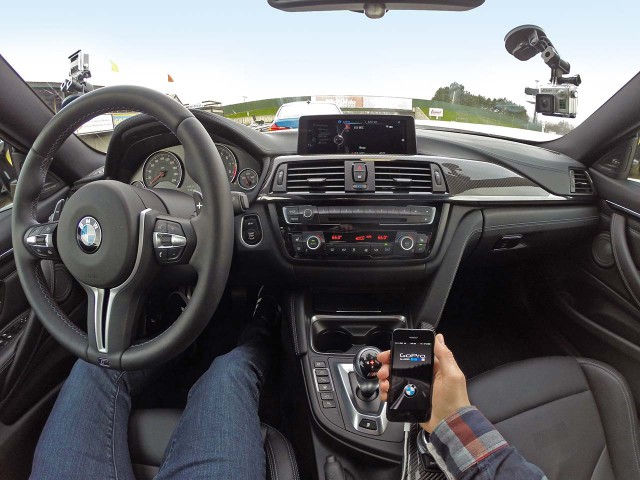 BMWand GoPro have taken the wraps off of perhaps the best MINI App yet. The new GoPro App features full integration of the camera’s functionality directly in the iDrive interface. We got to play with the new app and the updated GoPro Hero3+ at Road America recently (alongside the new BMW M4) and came away incredibly impressed. The in-car app not only allows you to start and stop the video but gives you a series of presets that takes much of the guess-work out of setting up the GoPro. In short it streamlines the process and gets you driving and recording faster.

The app works by having the GoPro app on your iPhone (it’s iOS only for this initial release) and the plugging the phone into your MINI App equipped MINI. From there you go to apps in the car and press GoPro – that’s it.

Video after the break.

The integration of the app in the vehicle operating system is taken care of via the customer’s Apple iPhone, while the signal exchange with the GoPro camera is ensured by means of a WLAN connection. This enables the camera to be controlled wirelessly – regardless of whether it is mounted inside or outside the car – for example on a bumper, on the roof or on an exterior mirror – so as to be able to take photos and films high-speed road action.

The driver can use a menu on the on-board computer not only to start and stop the camera but also to set the shooting mode. There is a choice of video and single-image shots as well as photo series with short or long frequency. Special modes are also available to optimise image quality in various driving situations such as night time or cornering. In addition, the camera can be switched on and off using the MINI operating system, and the charge state of the camera battery can be displayed on the screen along with the strength of the WLAN signal and the remaining recording capacity. When the car is standing still, a preview image is displayed which shows the camera perspective.

The App is compatible with all Wifi equipped GoPros making much of this technology backwards compatible. The GoPro app is actually an updated version of the current App that has been unlocked to now work with BMW Apps in-car.

The MINI has never exactly been camera-shy, but now the brand’s latest models can get themselves on camera easier than ever before.

A new MINI Connected ready App enables GoPro cameras to be controlled via the dashboard – meaning shooting a movie is now as easy as changing a song or altering the air conditioning. MINI is the first car brand whose operating system can be used to control GoPro cameras.

This makes it possible to start shooting video with a camera mounted on or inside the car while travelling. The functionality is intuitive, convenient and, most important of all, safe. Apple iPhone owners can download the new MINI Connected App free of charge from the Apple App Store from June 2014.

GoPro cameras are specially designed for taking photographs and shooting videos during adventure sports and leisure activities, and are even used by racing enthusiasts to document their driving skills. With the new App, MINI drivers will be able to concentrate on finding the ideal line while having fun on the race track.

Thanks to the new GoPro MINI Connected ready App, camera functions can be operated via the high-resolution colour display on the central area of the dashboard and the MINI Joystick or MINI Touch Controller in the centre console, requiring minimum distraction.

The car must be fitted with the MINI Visual Boost Radio and MINI Connected or the MINI Connected XL package. The integration of the App inside the vehicle’s operating system is handled through the customer’s Apple iPhone, while a WLAN connection is maintained between the GoPro camera and iPhone.

There is a choice of video and single-image shots as well as a photo series mode with short or long interval options. Special modes are also available to optimise image quality in various driving situations such as night time or cornering. The camera can also be switched on and off using the MINI’s centre console, and the charge state of the camera battery and remaining recording capacity can also be displayed on screen. When the car is not moving, a preview image can be displayed which shows the camera’s perspective.

This new MINI Connected ready App once again demonstrates the limitless capabilities of the unique MINI infotainment system. With Apps developed by third-party providers and designed especially for use in the MINI, the range of Apps available is continually expanding.

Apps available now include a wide spectrum of services such as Glympse, AUPEO!, Stitcher, Deezer, Audible, Napster, TuneIn and the Amazon Cloud Player. Then there are the services built into the MINI Connected system such as a web radio and RSS news feeds as well as social media including Facebook, Twitter and foursquare. Online search and functions exclusive to MINI such as Driving Excitement, Mission Control, Dynamic Music and MINIMALISM are also available, as well as the new MINI Connected XL Journey Mate for interactive travel planning and support for Real Time Traffic Radar.