It’s really weird. Worldwide, MINI is doing just great. Heck, even Canada and Mexico are showing good numbers, so there are parts of the North American continent that are doing well. But here in the US, there seems to be mostly bad news for MINI sales.

May year-on-year sales numbers are down 21.2% to a total of 4,595 vehicles delivered. The good news is that the Clubman seems to be moving well, and the new Convertible is contributing to growth, but not enough to offset declines in the Hardtop (both 2- and 4- door) and the Countryman. 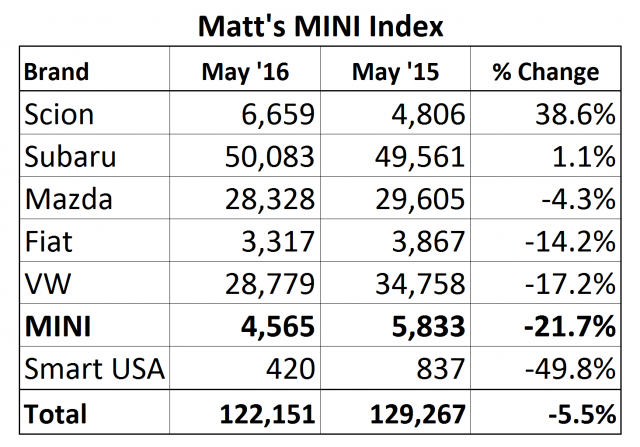 We’ve detailed our theories on MINI’s sales decline in the US diving into the data it would seem that some of those thoughts are supported. The very long in the tooth MINI Countryman had a solid month with over 1200 sold in the month. The fact that MINI’s oldest model sold the best clearly has something to do with it also being the brand’s only crossover. And if you aren’t keeping score in the US auto industry, crossovers are killing it in the US sales race.

US Light Vehicle sales are off a bit more than 6% overall, and Matt’s MINI Index is down as well, sliding 5.5% in May. BMW has pretty much given up any explanation or positive spin in the corporate release, just quoting numbers. A refreshed Countryman can’t come soon enough! 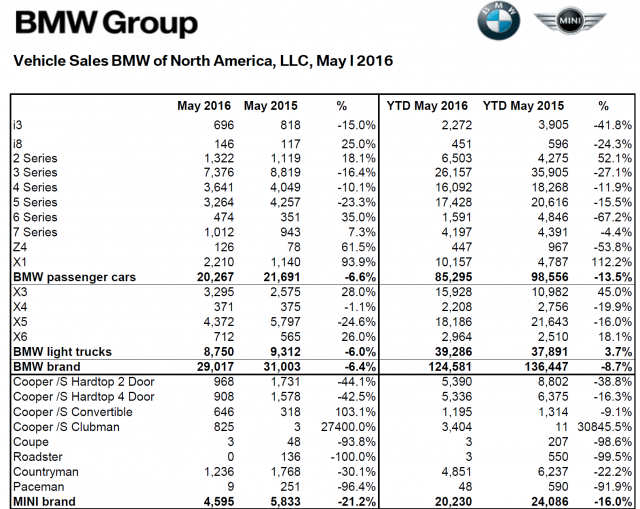 BMW pre-owned and MINI pre-owned vehicle sales.
BMW of North America is currently experiencing a technical issue which has delayed numbers for pre-owned sales.  Sales numbers will be added online once the issue is resolved.