Official release: MINI USA is proud to congratulate the MINI JCW Race Team and LAP Motorsports Team Owner Luis Perocarpi on completing their first full season of the Continental Tire SportsCar Challenge series in the Street Tuner class. The first factory-supported race team for MINI in U.S. sports car racing had an amazing season, building on the momentum of the partial season last year that concluded with the #73 MINI JCW driven by Mat Pombo and Derek Jones on the podium with a second place finish at Road Atlanta.

In true MINI fashion, the team was certainly the underdog among the fierce competition in a class that included well-funded race teams from Porsche, Honda, Audi, Mazda, Nissan and BMW. Under the direction of LAP Motorsports Team Owner Luis Perocarpi, the near-production MINI John Cooper Works Hardtops, three in total, lived up to the feisty, never-say-die attitude of the legendary Classic Mini drivers of the 1960’s by remaining a thorn in the side of the larger, more-established race teams all season long.

“We could not be more proud of Luis, the drivers and everyone at LAP Motorsports who supported the team both at the shop and at the track on race weekend,” said Patrick McKenna, Department Head, MINI Product Planning & Aftersales, MINI USA. “The team’s enthusiasm and spirit is a true testament to our rich racing heritage that started back in 1964 with our first victory at the world famous Monte Carlo Rally.” 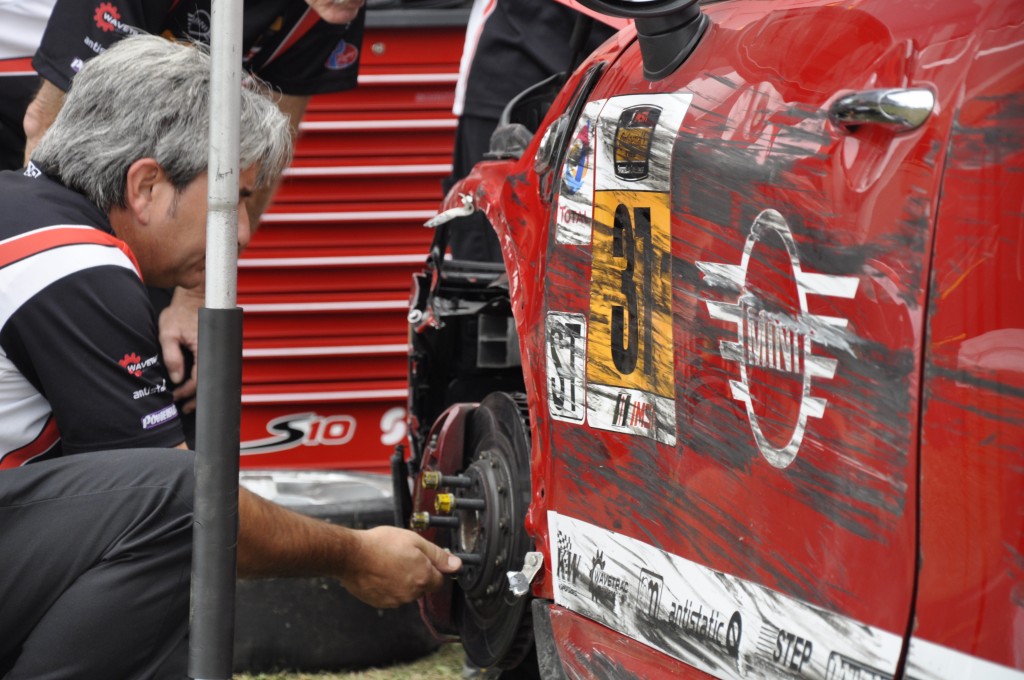 The season kicked off with a front row starting position for the #37 car driven by Mark Pombo at the world-famous high banks of the Daytona International Speedway, and also included a front row start at Watkins Glen International with Derek Jones taking the pole in the #73 car and a podium finish at Virginia International Raceway. The team also recorded the fastest race lap at Road America and finished all three cars in the top 10 at Circuit of the Americas and two cars inside the top 5 at the season finale at Road Atlanta. The team finished in fifth place among the six automakers competing for the Manufacturers Championship, ahead of Audi and only three points behind sibling rival BMW.

“The MINI JCW Hardtops were incredibly fast every weekend and always outperformed our expectations,” said Luis Perocarpi, team owner, LAP Motorsports. “There is no other vehicle I would rather take to the race track every weekend. I grew up racing Classic Minis with my father and uncle, so I guess you could say both myself and MINI have racing in our DNA.” 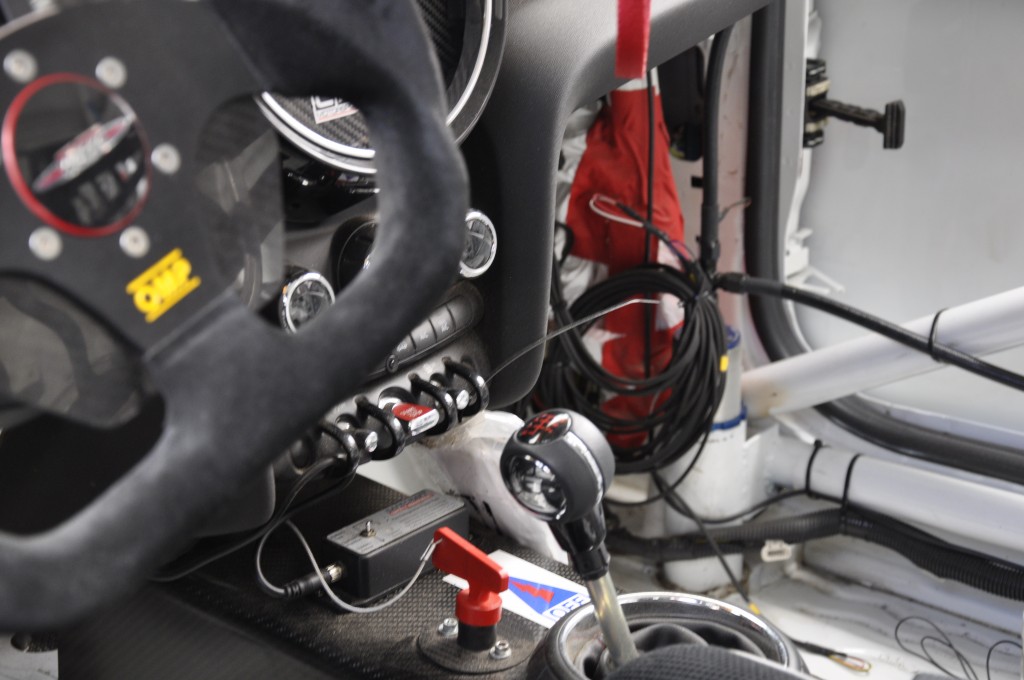 A well-known and well-liked personality at the track, Perocarpi seems to have every race team quietly cheering for him and the team behind their haulers each weekend. A racing veteran who started racing Classic Minis with his father and uncle as a kid, Perocarpi embodies the true MINI racing spirt, having competed in CART, INDY Car, Score International Offroad and Superleague Formula racing, to name a few, throughout his career.

Perocarpi also had a lot of support both on and off the track. By his side were longtime friend, business partner and lead engineer Rob Ridgely, longtime girlfriend Wendy Doyle and engineers Brad Mose and Zdravko Miric. Doyle’s son Charlie also serves as a team engineer.

Driving for the team throughout the year were brothers Mat and Mark Pombo, sons of production sportscar racing legend Pepe Pombo, along with Derek Jones, Ramin Abdolvahabi, James Vance, Tyler Stone and Nate Norenberg. While Mat Pombo and Derek Jones piloted the #73 car all year long, the rest of the drivers would often switch vehicles from race to race in order to find the best performance combination and personal chemistry. Both Pombo and Jones plan to return for the 2017 season with the hopes of bringing home a championship in the #73 MINI JCW. 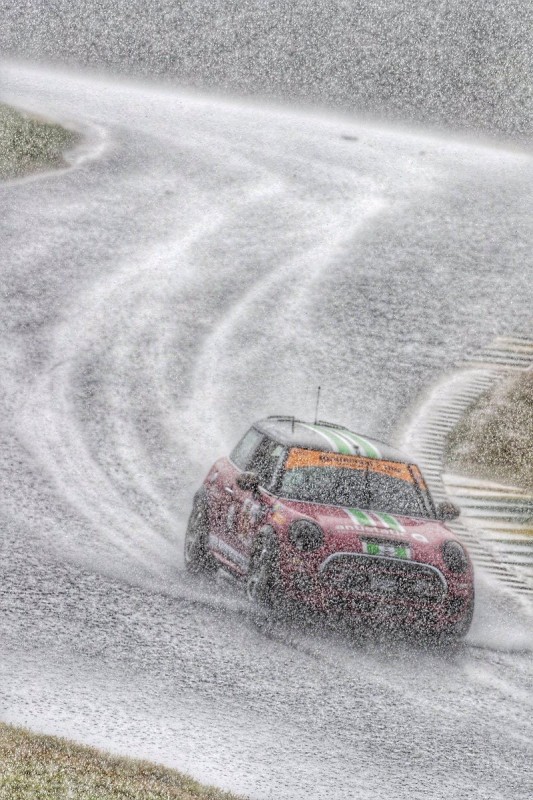 In addition to the hundreds of MINI owners that joined the team each race weekend to cheer them on from the MINI USA corals, technicians from MINI dealerships all over the country volunteered their time to serve as the team’s pit crew and technical support at the track. In total, approximately 50 different technicians from more than 35 dealerships helped out during the season.

“The support we had from the MINI dealer technicians was invaluable,” said Perocarpi. “Because we’re running production MINI John Cooper Works Hardtops with only minor racing modifications there is no one I’d rather have in the garage with us. They were instrumental to our success.”

Through a partnership with national non-profit Hire Heroes USA coordinated by Army veteran and team driver Mark Pombo, the team was also supported by a four-member pit crew comprised of military veterans at the season finale race at Road Atlanta.

With a super-wide stance, ultra-rigid body and incredibly precise handling, MINI has a long history in motorsports and has always felt right at home on the track. Ever since John Cooper first recognized the racing potential of the classic Mini in the early 1960s, his name has stood for success and performance on the race track with MINI.

MINI USA Debuts the MINI Oxford Edition for Under $20,000!