Due to travel conflicts, we couldn’t post the November sales numbers in the context of the industry as a whole. This post is about the November US industry-wide sales trends and how MINI stacked up this month.Overall, MINI did OK. Even pretty good in the context of the whole year. While overall US light vehicle month-on-month deliveries were up 3.6% after three months of downturn, MINI posted a respectable growth of 1.4% compared to November of last year. While less than the industry average, it’s much better than big brother BMW that saw a decline of 18.2%

November numbers breathed new life into the hope that 2016 US light vehicle sales would hit a seventh straight year of growth, something that hasn’t happened since 1919 when sales grew for nine straight years. December will have to be a good month for this to happen. CUVs, Pick-Ups and Luxury sales are going to be the engines of success, if another record year is to happen.

MINI ranked third in Matt’s MINI Index behind VW and Subaru. VW’s sales growth has more to do with the timing of dieselgate as opposed to any real product success and Subaru is benefiting from a CUV-heavy lineup that appears to appeal to the US buying public. Fiat has the closest product line-up to MINI dropped over 14%, so MINI has nothing to be ashamed of. Scion appears to be running out of inventory, and December will be the last month that it’s included in the MMI. 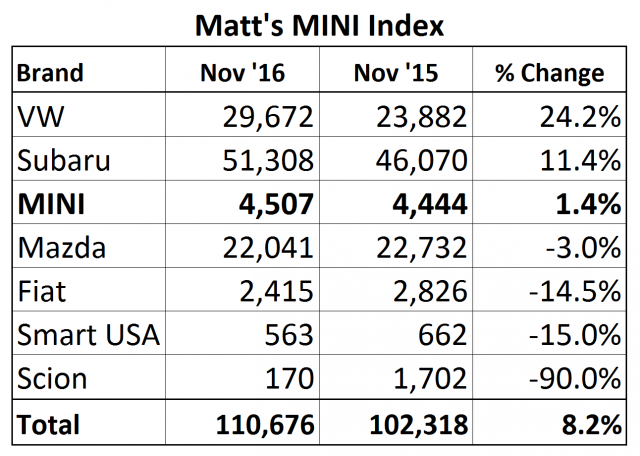 Another interesting break-down in MINI sales numbers has to do with two-door vs four-door sales. All variants of two-door models dropped 514 units, while four-door variants rose 577 units. The Clubman is the sales star, with more than twice the total sales of the 4-door Coupe and almost twice the sales of the Countryman. The larger MINI aren’t exactly huge hits with US buyers, but for total sales to be up slightly when only five models are in play compared to eight last year means that MINI is doing OK as a leaner organization. The new Countryman can do nothing but help when launched in March.

Nothing MINI can do will erase the sales hole created earlier this year, but next year looks to be better. Core models are selling pretty well and new product introductions look to add to the brands desirability to the larger marketplace. Even though MINI can’t seem to figure out what the 5th core model will be, or even if it will be, 2017 looks to be a year of growth as opposed to 2016 that wasn’t.

GM To Go Head-To-Head Against MINI?

MINI USA Sales Down 6.5% For August