June was another down month for sales for MINI USA. Dropping 10.3% compared to June of last year, it’s more of the same for MINI. Yes, it was a down month for the whole industry, dropping about 3% (a couple of companies have yet to report). MINI dropped over 3 times as much as the industry as a whole!

For some context, US light vehicle sales are a glass half full, a glass half empty, depending on how one looks at it. The half full camp looks at the fact that total sales this year are looking like they will be somewhere close to 17 million units, near record highs. The half empty camp looks at the fact that year-on-year monthly sales have dropped for six straight months, incentives and inventory are both growing, and these three items should lead to worry.

But for MINI, annual sales are far from record highs. Last year, MINI USA delivered 52,030 units. In 2013, MINI’s best year in the US, deliveries totaled 66,502. And this year is down over 11% compared to last. This funk extends beyond just sales. Looking at Automotive News’ web site, there are just two articles about MINI in the month of June, both about Oliver Heilmer taking over MINI design, but he doesn’t even start until September 1st! Contrast this with news about BMW, that had 30 articles in June. Heck, BMW had 4 articles just on the first business day of July!

This lack of presence extends to the official press release about BMW USA group sales, where BMWNA just quotes the numbers, with no text describing anything about the brand. Just a scant 2 sentences cover new MINI sales. 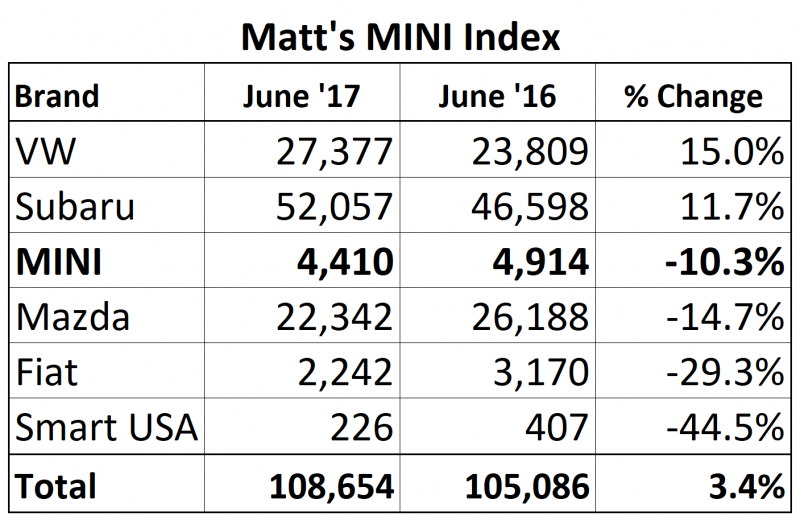 But the news isn’t completely bad: MINI moved up one spot on Matt’s MINI index, jumping over Mazda. (But even against the MMI, MINI did poorly. In June, the MMI grew 3.4%!) The Countryman held it’s own, and the 2 door hardtop actually had a good month, up 18% to over 1,000 units! But the 4-door hardtop and the Clubman both had poor months, not good for MINI at all. Used car sales are up though. MINI has moved 15,652 used cars year-to-date. And let’s not forget, if you don’t find a MINI model that you really want to buy, you can always get an umbrella!

The MINI Wagon Concept – In Depth