MINI USA had another rough month with sales off 7.2% off when compared to September of last year. To make matters worse, there were 26 sales days this year and only 25 last year. That’s another 4% hit right there.

Overall, US light vehicle sales were up 6.7%. Official readers of automotive-market tea-leaves attribute this strong demand to basic health of the overall economy, low interest rates and low gas prices. Replacing all the hurricane damaged cars added an additional bump as well. 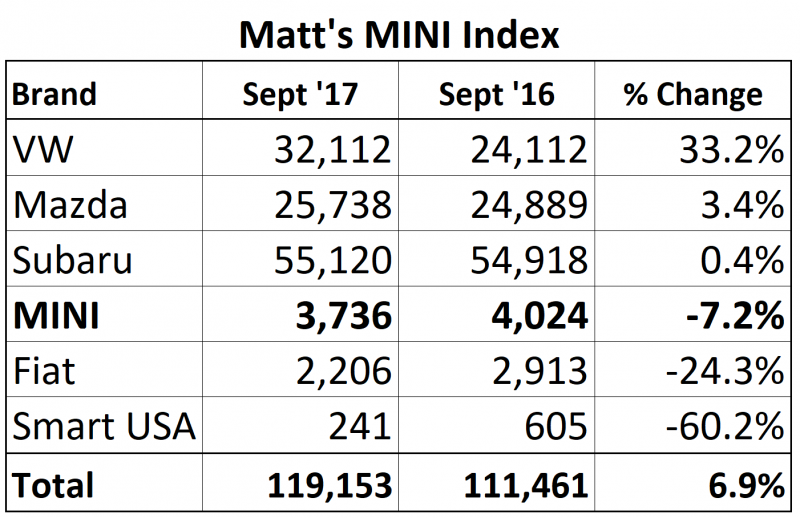 Looking at Matt’s MINI Index, while in the middle of the pack, the news is far from good. VW sales numbers show that there is no sin that the US buying public can’t forgive. The over-all message from the MMI? “MINI, outperforming Fiat and Smart!” Ouch! Smart at least has a good excuse. They’re moving to selling only the electric model, the poorly named Smart ED. Many of the Smart dealerships have just thrown in the towel and shut their doors.

Really, the best news for MINI this month had nothing to do with current sales numbers. It’s that MINI has finally hired new marketing companies. The resignation of the past agency was reported on March 20th of this year. In effect, MINI has had rudderless marketing for over 6 months. It’s no wonder that sales have been so bleak.

The Clubman JCW was in this year’s Car and Driver Lightning Lap. It went around Virginia International Raceway faster than the Fiat 124 Abarth and the Subaru BRZ Performance Package. It had a higher top speed than those two as well as the Honda Civic Si. (Sadly, it had a higher price than all three of those cars as well.) When we drove one at Mazda Raceway Laguna Seca, the car was shockingly fast and competent, even with an automatic transmission! But you’d never know it from what’s been in MINI ads. We really hope that an effective message to the marketplace will make a difference in sales numbers. The brand sorely needs any help it can get.