The upcoming Ice Blue edition from MINI USA got us thinking about the first special edition car MINI USA ever created – the MC40. When introduced at the Chicago Autoshow in 2004 the MC40 was met with enormous enthusiasm from the MINI community. It was an throwback in every way to the Monte Carlo winning MINIs in the late 60s (down the faux license plate in the front) while also hinting at future JCW products. Yet it failed with many MC40s sitting on lots for over a year before being sold. Let’s take a look at what was right with the MC40 and what ultimately went wrong.

Looking back on this car it’s hard not to smile. For one this was early MotoringFile (some of these photos!) and early in the MINI’s history in the US. There was a ton of enthusiasm for this car at launch and when they hit dealers groups of MINI owners would meet up to see it.

The car itself was an interesting mix of options. It was designed to be focused and thus had no cruise and no sunroof. But it had a very enthusiast oriented specification: 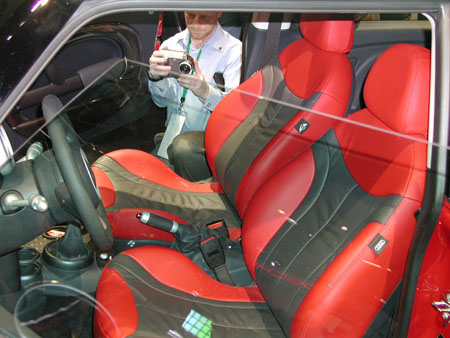 It looked great in photos but even better in person. The MC40 had plenty of not so subtle presence. For the MINI enthusiast who didn’t mind standing out, it was an ideal package.

The problem was the production number. MINIUSA grossly overestimated how many buyers were looking for a back to basics, performance oriented Cooper S for a $27,000. The first batch of production sold out quickly. The second batch also seemed to move, but quickly batch after batch languished in dealers lots. Before long you started to see MC40 loaner cars and even some of the first discounts ever in the modern MINI history. 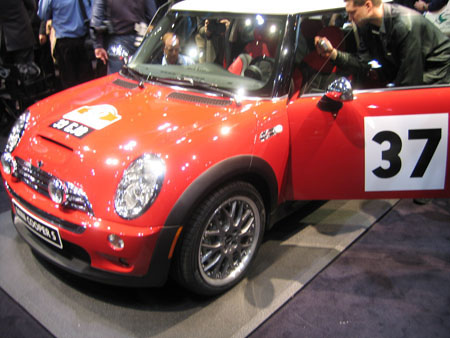 The production plan of 1000 cars in retrospect seems double, maybe even triple what it should have been. Many of those last cars had The undignified honor of habunf their stocker pulled off and sold at a discount by dealers who struggled to move cars without cruise or a sunroof.

13 years on of course none of it matters. The MC40 represented a great combination of options and accessories. And as a used car it’s a unique find that has a chance at being one of the more sought after US special edition MINIs ever.

Forty years ago this year, the Beatles performed on the Ed Sullivan show marking the start of the British invasion, and, across the pond, another British icon was making it’s mark in racing history.

It was January 1964 when Mini driver Patrick Hopkirk, a young Northern Irishman from Belfast, and his navigator, Henry Liddon, set out on the Monte Carlo Rally from the Russian city of Minsk. They were up against the likes of the V8-powered Ford Falcons, the Mercedes-Benz 300 SE, a Volvo 544, as well as a number of fine-handling Citroens. 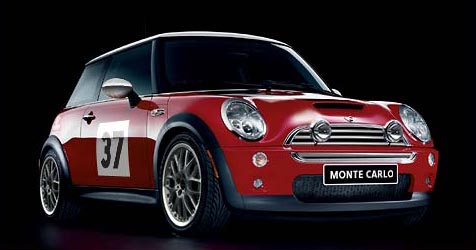 And when the dust settled at the finish line, a small red David with a white roof proudly showed its tailpipe to all those high-powered Goliaths, clinching overall victory in the Monte Carlo Rally. And in this “big bang”, the tiny little car immediately became a legend: The “giant killer” Mini Cooper S.

Driving the Mini Cooper S in the Monte Carlo Rally back in 1964, Patrick “Paddy” Hopkirk re-wrote the rules and so changed motorsport history.

The Mini recipe for success has remained basically unchanged since 1959: sufficient space for four people, not one gram of extra fat, plenty of muscle from the engine, lots of character and a truly sporting attitude – no car has remained as faithful to its principles over a long period of 40 years as the MINI. 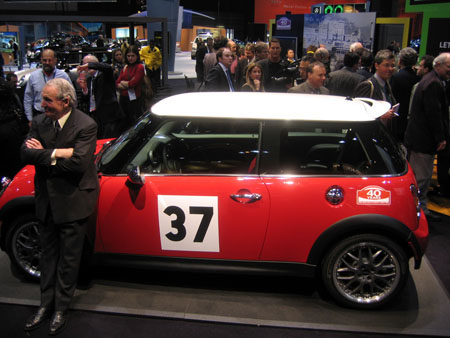 Forty years later, it is precisely this character which gives the MINI Cooper S its enormous popularity. While retaining the ingenious “wheels at four corners” concept, the MINI Cooper S comes with the most modern automotive technology within its engine bay and, indeed, throughout the entire body of the car, ensuring maximum driving pleasure and optimum occupant safety. Engine power of 163 hp and maximum torque of 155 lb-ft give this exclusive driving machine a top speed of 135 mph, with acceleration from 0-60 in 6.9 seconds.

Although pricing has not yet been released, this great commemorative vehicle will debut on February 4th at the Chicago Auto Show. The first 80 cars will be produced in Feburary at the Oxford plant with final touches being applied at the Ports. Once the vehicles are completed at the port, one vehicle per dealer will be assigned in March with the remainder being evenly built until June. Each car will come with a plaque with Paddy Hopkirk’s engraved autograph and will be individually numbered from 1 to 1,000.