Autocross in a MINI has always been fun. But doing it with someone else’s JCW MINI on a purpose built autocross track (with a e-brake turn thrown in for good measure) is an absolute blast. I had the pleasure of doing just that at the Thermal Car Club (aka BMW Performance Center West) yesterday along with some time behind the wheel of the BMW i3s for good measure. 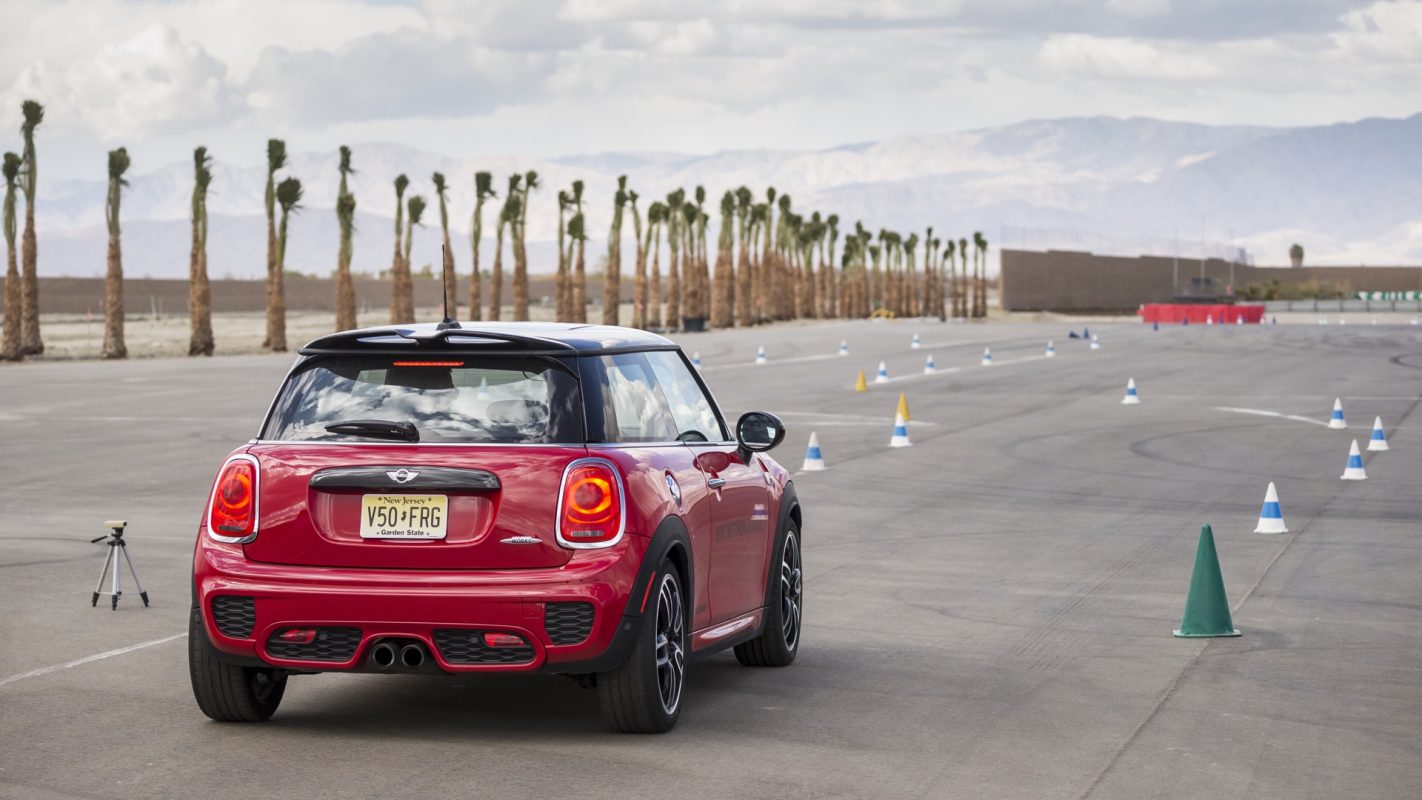 Sometimes we forget just how good the F56 JCW is on the track. It’s not just that it’s quick (it is). It’s the total package with great brakes, well sorted suspension and plenty of power.

The session I attended was called MINI Stunt Driving. The idea is to combine normal autocross with one stunt – 90 degree handbrake turn into a box at the end of the lap. Hilarious? Yes. Addicting? Completely. 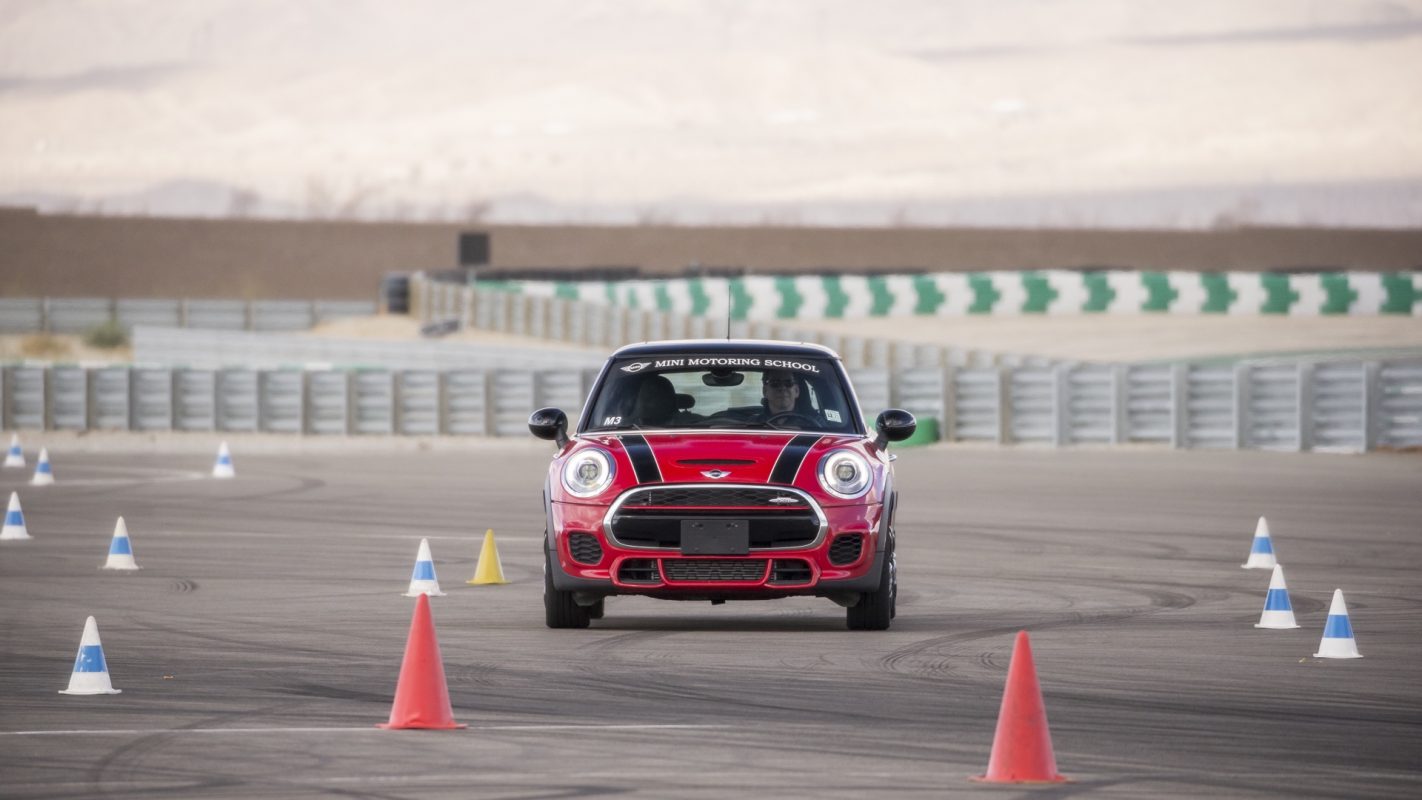 The goal of course was to win. The challenge was to beat the other 20 or so journalists assembled who all wanted bragging rights.

I had three runs with instruction by the excellent staff (shout out to Rob in particular) along the way. With a little prep I climbed into my Chili Red JCW and drove up to the line.

The JCW we tracked was a bone stock JCW and it had been run for 3 hours before I got my hands on it. Other than the tires being a bit warm everything was operating perfectly despite being beaten on – something MINIs have always been great at. 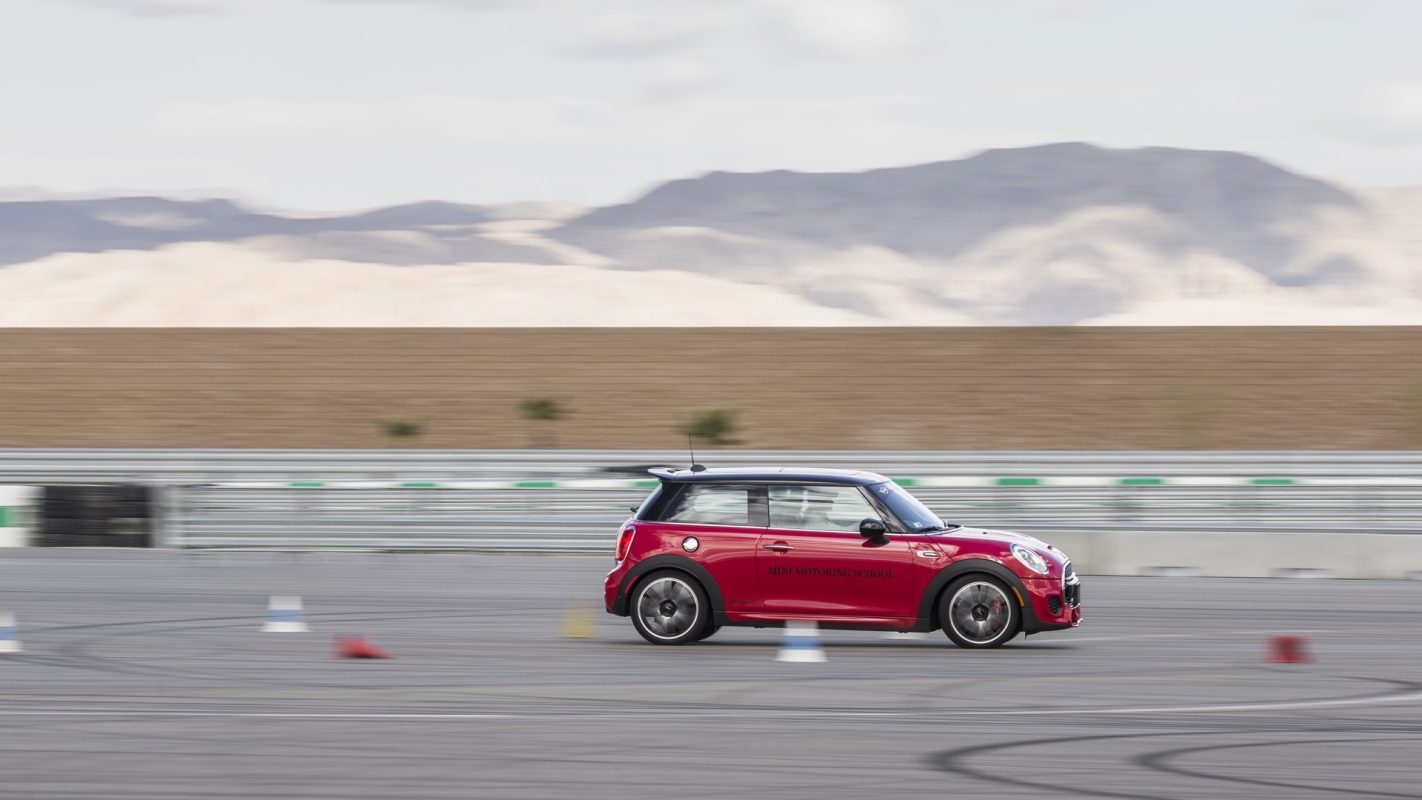 I had one more run left. I knew there were a couple of hot-shoes who still hadn’t driven so I want to pad my lead a bit more. Once again I turn up the speed a bit and pushed the limits of the 205mm tires. This time I came in so hot into the box that my 90 degree e-brake turn became a 180. With smoke everywhere I looked up. 33.3! Then the instructor came on the radio laughing. I hadn’t knocked down a cone. My back bumper was just kissing it ever so slightly disqualifying my final run.

In the end it didn’t matter. No one could better my second run and the guy that runs the MINI site rightfully won the MINI autocross. 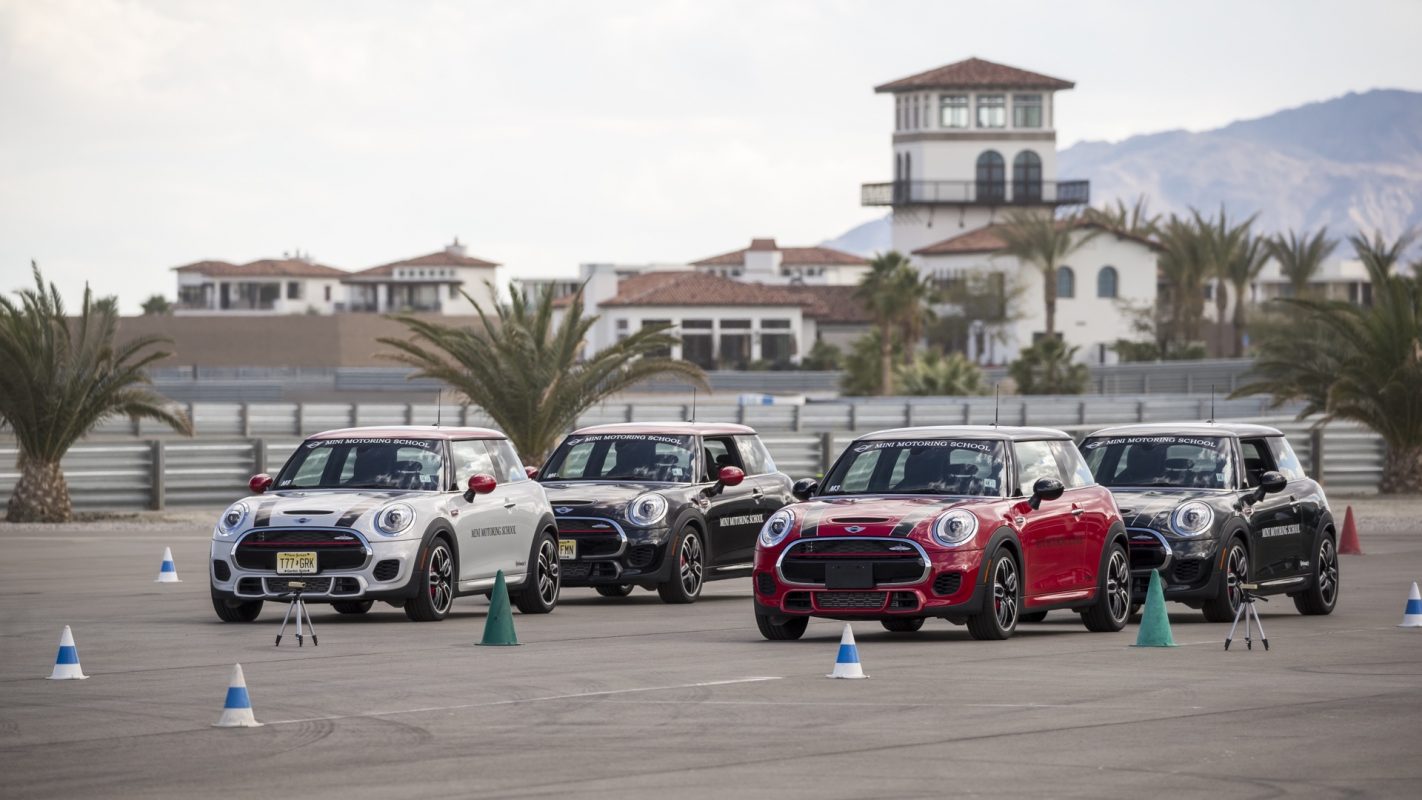 The MINI Motoring School is located just outside of Palm Springs California at the Thermal Track Club. The facility is amazing and the program is an excellent way to get much more out of your MINI. Understanding the limits on the track will give you infinitely more confidence on the road. It’s also an absolute blast.

Oh what did I win? A MINI x Channel Island Surfboard naturally. 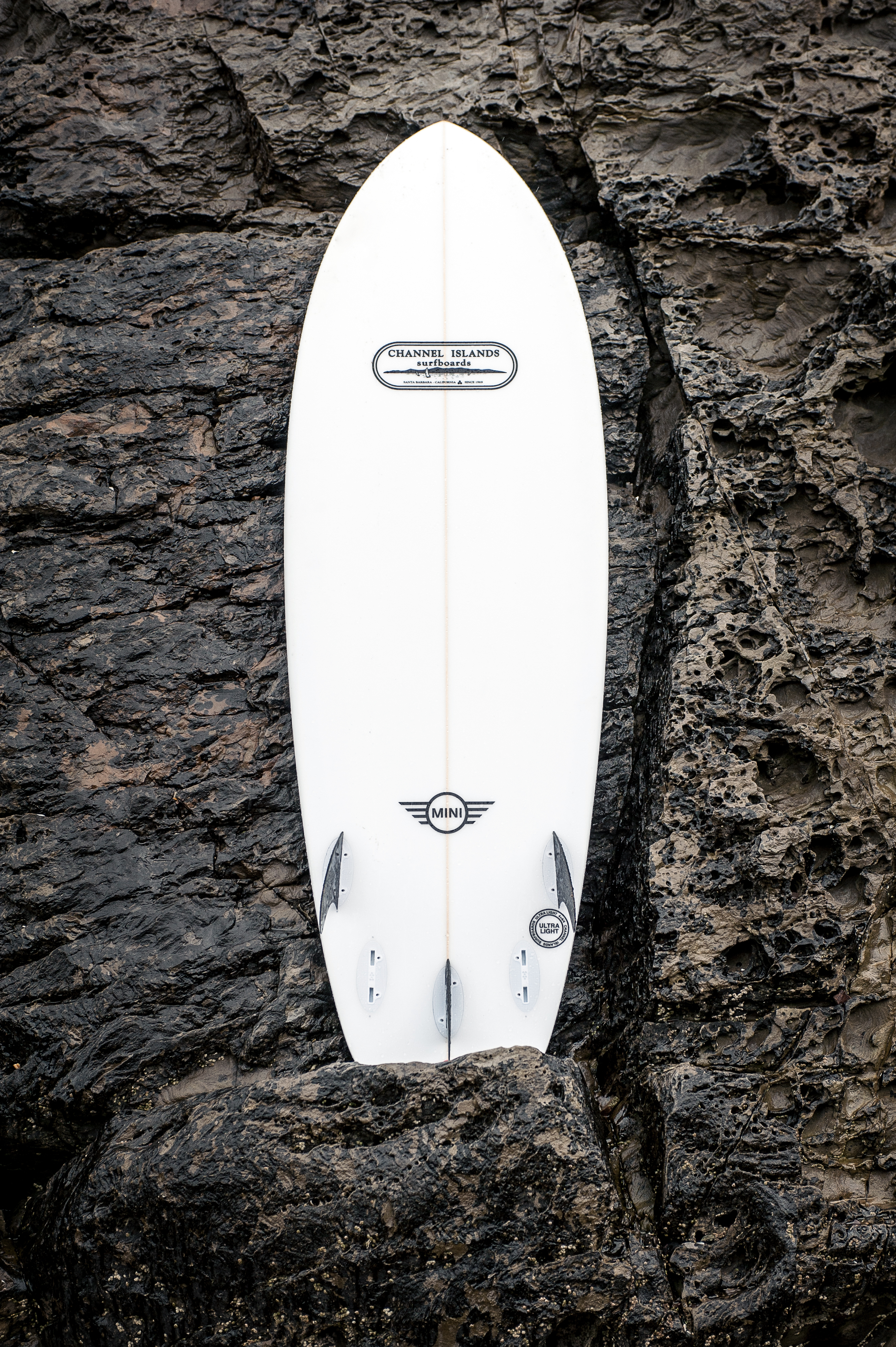 An Introduction to the MINI JCW Racing Team