The new 301 hp MINI JCW Clubman is an interesting proposition on paper. Somewhere between a wagon and a hot-hatch, the JCW Clubman offers fast alternative to typical hot hatches. To test that concept Autocar recently pitted the JCW Clubman against the all new (and nearly identical) BMW M135i and the Mercedes AMG A35. Here’s what they found. 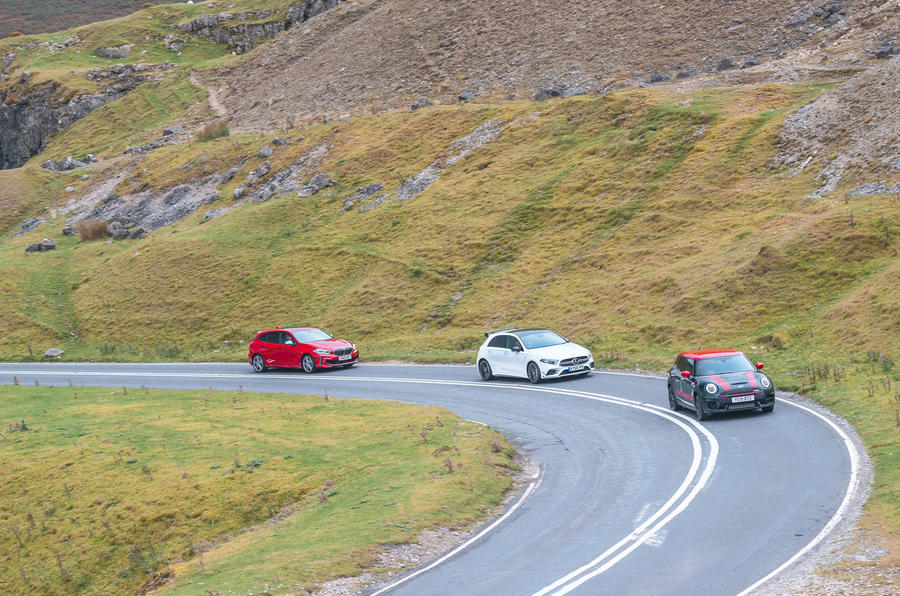 “this Clubman JCW really does deliver a more incisive, engaging driving experience than the average hot hatchback of its size, and packs plenty of driver appeal into its esoteric silhouette. It corners flatter than either of its rivals and grips just as hard. It communicates slightly less through its steering than the BMW, granted – and offers much more in the way of precision, stability and traction than of outright cornering balance or handling adjustability, too. Still, it’s the most natural entertainer here – the simplest, most fun, most route-one hot hatchback.”

As much praise as they give the Clubman they (rather vaguely) find the M135i offers a bit more in terms of performance and technology. Both sound a bit suspect to us given the weight difference is negligible and the infotainment systems are extremely similar.

The one area that is truly different between the two is the chassis. While both appear to be identical, the reality is that the BMW rides on an updated version of the UKL called the FAAR platform. This theoretically gives the car a stuffer structure helping everything from performance to comfort. But even that may be splitting hairs as most of us would never be able to feel differences so subtle. Ultimately the battle between these two cars is all about personal preference.