My wife and I have always been big fans of having navigation units installed in our cars as they really help when trying to get around in unfamiliar territory. However, my wife’s new 2005 MINI Cooper S was ordered without a factory navigation system in order to save us some money. For our navigation needs, we opted to go with a (much cheaper) Garmin Quest portable navigation system instead. The Quest portable navigation unit works great for our needs and its super small size fits nicely with the whole “MINI” theme.

The Quest is a fully portable navigation device, but it still comes with a cradle kit that is used to mount the unit within the vehicle (via a suction cup that attaches to the window glass). The mount itself contains a permanently attached 12 volt power supply cord that plugs into the car’s cigarette lighter socket and provides power to the unit while in the car. The power cord also houses a small external speaker from which the unit gives voice routing directions while it is sitting within the cradle. The problem with this setup is that the small external speaker sounds absolutely terrible. It’s very distorted and it’s very hard to hear when the car is moving at freeway speeds and/or the radio is on.

Fortunately, MikeyTheMini comes to our rescue once again! Mikey offers a navigation interface kit that will integrate most portable navigation systems into your MINI’s radio (factory or aftermarket). Mikey’s navigation interface kit will auto-switch the front right speaker(s) of the MINI’s radio whenever your navigation unit speaks. A separate speaker output on your navigation unit is all that’s required in order for the interface kit to connect to. The installation is 100% plug-n-play (as far as the car is concerned) and so you won’t have to cut a single wire in your MINI’s factory wiring harness in order to install it.

Since the Garmin Quest has an external speaker, it’s a perfect candidate for Mikey’s navigation interface kit. At long last, we’ll be able to get rid of that horrible sounding external speaker that came with the unit and route all of the unit’s voice commands through our MINI’s factory installed radio head unit instead. 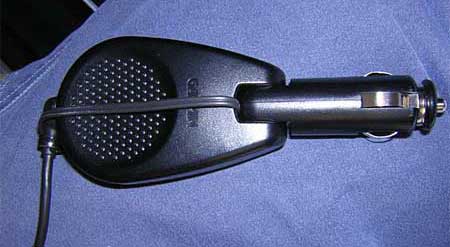 To install the navigation interface kit I simply unscrewed the plastic casing on the Garmin Quest cradle’s power supply cord, cut the existing wires going to the external speaker (i.e. the two small red & black wires going to the speaker in the following photo), and hooked them up to the black speaker wire extending from the navigation interface kit instead:

The MINI’s radio was then removed and its wiring harness was unplugged from the back and exchanged for the one that’s part of the navigation interface kit. The radio was then reinstalled into the car and the navigation interface kit’s wiring harness (and magic black box) was routed down into the cubby panel below the steering column:

Mikey also offers a power take-off adaptor kit that can be combined with the navigation interface kit in order to provide take-off power from the radio that can be used to power your portable navigation unit. In the following photo you can see that the power take-off adapter kit (which ends in a cigarette lighter socket) has been added (by Mikey) to the navigation interface kit. The Garmin Quest cradle’s 12 volt power supply cord has then been plugged into the take-off power adapter. This has the added bonus of freeing up the cigarette lighter socket in your MINI for use by other accessories or for use by the cigarette lighter itself if you’re a smoker.

The entire (and very large!) wiring loom for the navigation kit is then neatly tucked up into the cubby hole and the magic black box (which does all of the work) is secured in place using a few wire ties:

The installation is very easy and it takes less than 30 minutes to complete. The end result is a great sounding voice output from your portable navigation device that runs through your MINI’s radio. It’s absolutely fantastic!