This comes from Alex:

A few German members from mini2-rheinland.de saw the next generation Cooper S on the Nurburgring “Nordschleife” this morning!

You can check out more photos at the link below:

[ New MINI at the Nordschleife ] www.newmini-technik.de 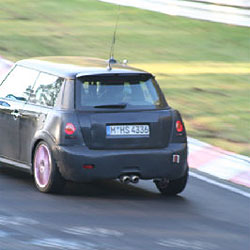 MF Analysis: Based on these photos it would appear that MINI is well far along in the development of the next generation MINI (the R56). I’m guessing that they’re now at the Nurburgring to test, tweak and finalize suspension settings as well as gauge the overall performance of the car. Very encouraging signs for those of us eagerly anticipating the 2007 MINI.

These photos also seem to corroborate some of what was reported in our Next Generation MINI Revealed story from last March. The larger wheels, the visible c-pillar, the hood scoop, and even the combination headlights/drivng lights, are all obvious in the photos. It would also appear that the general shape of the final car (at least the front end) is fully represented in these photos as well since they’ll also want to test handling and especially aero lift in the higher speed portions of the track.

Buying a 2007 MCS: The Accessories