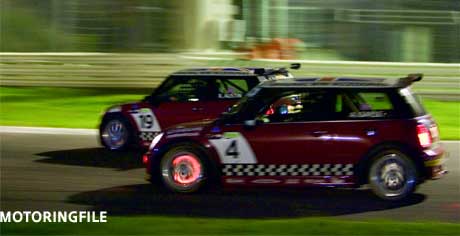 A win in the final race of the weekend allowed Maxime Martin to seal overall victory in the MINI Challenge World Final. The Belgian driver had the edge over the 19 fastest MINI drivers from ten different countries over the four disciplines of this multi-faceted championship. Second in the standings was the Swede Fredrik Lestrup, ahead of Johannes Stuck (Austria) – son of racing legend Hans-Joachim “Strietzel” Stuck – in third. The world championship was just one of the attractions on the bill at the inaugural MINI United event.

In addition to the two 16-lap races in technically identical MINI Cooper S cars complete with John Cooper Works Tuning Kit, the drivers also had to negotiate a pair of slalom courses in the same cars, battle it out over two karting races and demonstrate their skill over a quad driving course. The points earned in each discipline were added together for the overall classification.

“I had to work hard to wrap up the MINI Challenge world championship title,” said Martin. “After my rather unfortunate first race, I thought my chance had gone.” Martin came into the pits unnecessarily in the night race on Saturday after misinterpreting a trackside instruction, shunting him back down the field when victory was within reach – and costing him valuable championship points. However, Martin backed up his eventual sixth place with impressive performances in the other disciplines to leave him with a slim 75-point advantage over Fredrik Lestrup in second place. 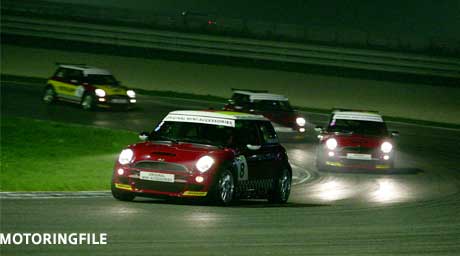 Stephanie Halm, the only woman in the field, finishes fifth.
“I messed it up in the second karting race,” grimaced Lestrup. Indeed, after winning the first outing in the karts the 21-year old could only manage eleventh position in the second run. “That left me short of points in the overall standings,” lamented the Swede, who was one of the fastest drivers in the two main MINI Cooper S races with one third and one fifth-place finish. “Having said all that, finishing runner-up was still a great result for me.”

Johannes Stuck went into the final race leading the overall standings, but dropped two places after he could do no better than fifth. “I was caught up in a minor collision shortly after the start,” explained the 18-year-old Austrian. “The suspension was damaged and that took the edge off the car’s performance.” Crossing the finishing line just ahead of Stuck was Stephanie Halm (Germany), the only woman in the field of the world’s fastest MINI drivers. Her fourth place allowed Halm to clinch fifth overall behind Belgium’s Franois Verbist.

“Una vittoria speziale” for Alex Zanardi in the Special Guest Race.
The Special Guest Race at the MINI United weekend ended in victory for Alessandro Zanardi. The Italian, one of the leading drivers in the FIA World Touring Car Championship, passed the then leader Alexander Burgstaller (Germany) in the final corner. “Winning the race on my home track is something very special for me, una vittoria speziale,” beamed Zanardi. The former Formula One driver and Champ Car champion lost both legs after a horrific accident four years ago and was racing in a specially adapted MINI Cooper S. 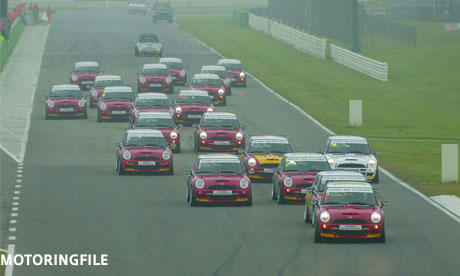 Burgstaller was unruffled by Zanardi’s decidedly aggressive overtaking manoeuvre. “It’s all just part of motor racing,” shrugged the winner of the German MINI Challenge 2004. “Alessandro pulled it off with such skill that I had no chance.” Third was Roberto Ravaglia (Italy), the 1987 touring car champion who has since become Zanardi’s team boss.

In all, 17 celebrity MINI aficionados lined up for the Special Guest Race to round off the MINI United event. Among the stars on the grid were ex-Formula One drivers Christian Danner (Germany) and Marc Surer (Switzerland), Finish “Rally Professor” Rauno Aaaltonen – the winner of the 1967 Rallye Monte Carlo in a Mini – and the Italian singer Max Gazze. Twice German production car champion Claudia Hurtgen led the race from pole position, but was forced to retire with electronics problems.