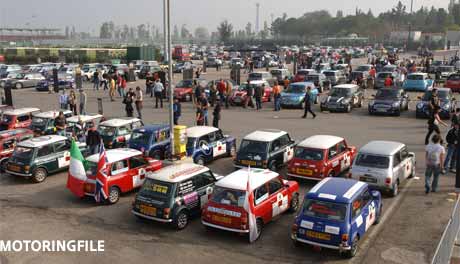 And the press releases just don’t stop about MINI United. This one is from the fine folks at MINI UK:

The first international MINI United festival took place this weekend in Italy and 6000 MINI fans attended from more than 40 countries.Most people made the journey in their own car meaning nearly 2000 new MINIs and classic Minis crowded the Santa Monica racetrack in Misano.

Over 250 MINI owners travelled the 1000-mile journey from the UK joining owners from Thailand, Japan, Australia as well as their European counterparts. The award for the longest drive went to Dimitri Kotov from Moscow who drove 2200 miles to be at MINI United.

The three days of entertainment started on Friday 28 October, and included stunt shows, karting, helicopter rides, blading, live music and dance acts that kept the party going until the early hours of Sunday morning. Yet, the main focus was on the track. Whether owners took to the circuit in their own MINIs, experienced a lap with a professional racing driver or watched the MINI Challenge races. 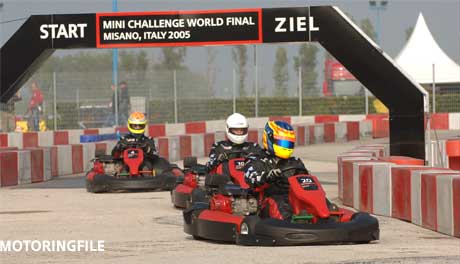 The fastest drivers from the national MINI Challenge Series’ went head-to-head in four different disciplines to find the inaugural world champion. Drivers from ten countries including the UK, USA, Germany, Finland and Bahrain competed in a challenging few days of karting, slalom, off-road trials and MINI racing to achieve the highest points overall.

The first MINI Challenge world champion title went to Maxime Martin from Belgium. Swedish and Austrian drivers finished second and third place, while the winner of the Scottish MINI Challenge managed to get in the top ten taking seventh place out of 20 competitors. The top English competitor came twelfth.

Another highlight of the weekend was a special sneak preview of the new MINI Cooper S with John Cooper Works GP Kit and the chance to speak to the designers about the lighter, more powerful MINI. Only 2000 will be built and will go on sale next July. 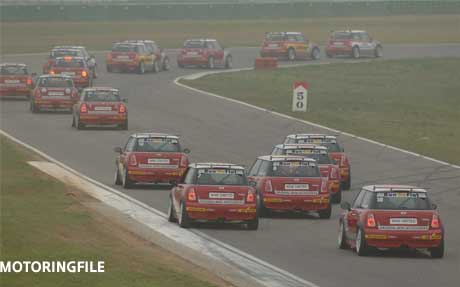 The final race of the weekend saw ex-Formula One drivers, Touring Car champions and Monte Carlo winners line up on the grid in identical 210bhp MINI Cooper S’ with the John Cooper Works Tuning Kit. Despite the casual remarks before the race, the inherent competitive spirit of racing drivers filled the atmosphere and FIA World Touring Car Champion Alessandro Zanardi took a close finish, happy to win in his home country.

For those who just can’t get enough, here’s the more detailed version of press release from MINI USA:

Glorious autumn sunshine lit up the MINI United event 2005 – the first official annual meeting of MINI fans from around the world – at the Misano racing circuit near Rimini. Some 6,000 visitors from more than 40 countries were there to lap up the three days of lifestyle and motorsport-inspired ambience and events.

Most of the MINI aficionados arrived in the Adriatic in their own cars, with over 1,900 MINI models – both historical and of more recent vintage – making the journey. A group of 80 British MINI enthusiasts, for example, incorporated MINI United into their annual pilgrimage to Italy following in the tyre tracks of the hit film “The Italian Job”. Dimitri Kotov took the honours for the longest distance travelled, spreading the 3,660-kilometre journey from his home in Moscow to Italy over five days. Ho Hang On, meanwhile, came all the way from Hong Kong to attend the event – albeit by plane. The proud owner of the 700,000th new-generation MINI was presented with a model car in a symbolic hand-over ceremony. The jury gave the “Best of Show” award to a MINI fitted with gullwing-style doors and powered by a 177-kW (240-bhp) engine.

The visitors to Misano enjoyed three days of fun and entertainment inspired by the MINI brand. On the agenda were everything from design workshops to MINI Collection fashion shows, with the laid-back atmosphere and parties – featuring live music from renowned international artists including British DJ Sonique – contributing to the success of the event. On display for the fans were a variety of famous MINI models – including the special-edition Bisazza and Missoni-inspired versions, a MINI in XXL stretch limousine trim and the cars of David Bowie and Michael Caine – and an exclusive world premiere of the MINI Cooper S with John Cooper Works GP Tuning Kit. This particularly lightweight version of the MINI Cooper S brings the MINI Challenge ambience from the racetrack to the road.

Among the numerous activities on and off the track were “taxi rides” alongside professional drivers in a MINI Cooper S, driver safety training, helicopter tours, karting for all-comers and the chance to complete a few laps in your own MINI on the “Circuito Santamonica”.
Belgian Maxime Martin is the first MINI Challenge world champion.

The sporting highlight of the event was the MINI Challenge World Final, in which the 20 fastest drivers in the various MINI Clubsport series battled it out for the official world championship title. The drivers went head-to-head in four different disciplines – races and a slalom test in the MINI Cooper S with John Cooper Works Tuning Kit, a test of skill over a quad driving course and karting competition back on the track. Belgium’s Maxime Martin took the title ahead of Fredrik Lestrup (Sweden) and Johannes Stuck (Austria).

MINI United boiled to a spectacular climax in the shape of the Special Guest Race, in which 17 celebrity MINI enthusiasts in technically identical MINI Cooper S cars went head to head. Among the stars lining up on the grid were ex-Formula One drivers Christian Danner (Germany), Paolo Barilla (Italy) and Marc Surer (Switzerland), former touring car world champion Roberto Ravaglia (Italy), Finnish “Rally Professor” Rauno Aaltonen (winner of the 1967 Rallye Monte Carlo in a Mini), Italian singer Max Gazz’ and twice ChampCar champion Alessandro Zanardi. The Italian, one of the leading drivers in the FIA World Touring Car Championship, came out on top after a thrilling battle with German MINI Challenge 2004 champion Alexander Burgstaller. “Una vittoria speziale,” beamed Zanardi. “This victory is something very special for me.”

Hammer and Coop in Secondlife