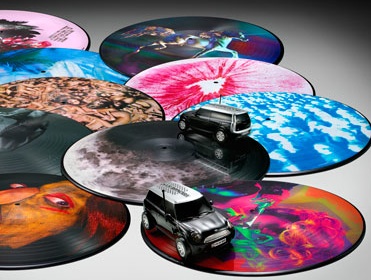 Something for those of you that are old enough to remember vinyl albums and miss the old-timey cracklin’ goodness you get from playing those records.

>With “Sound” a collaboration between Visionaire and MINI, the album is the artÃ¢â‚¬Â¦The 4,000 limited edition case issue contains five vinyls, imprinted with customized images and 100 minutes of audio, from unreleased songs to spoken word recordings. The albums feature music from artists like U2 and Courtney Love and boasts design work from such luminaries as Karl Lagerfeld and Alexander McQueenÃ¢â‚¬Â¦but that’s not all.

>You won’t have to go to the attic and get out your old Technics turntable because the records come with their very own player in the form of a little MINI Clubman car. That’s right a little miniature battery operated car drives around the record to act as both the player and the sound system.

Clever to say the least, but I can’t imagine it sounding any better than those old LP’s did.

You can the entire set at Amazon below (thanks Mark):