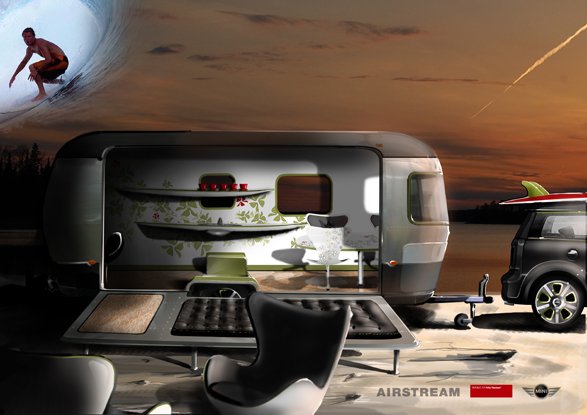 Munich. Airstream Inc. and MINI have teamed up to offer the best in both design and functionality with a one-off MINI Cooper S Clubman and Airstream creation designed by Republic of Fritz Hansen. The concept will be presented for the first time at the INTERNI DESIGN ENERGIES exhibition in the courtyards of UniversitÃ  degli Studi di Milano during the upcoming world-renowned Salone del Mobile show in Milan. The exhibition will be open each day from Tuesday 21 to Thursday 30 April from 10:00 a.m. until midnight. 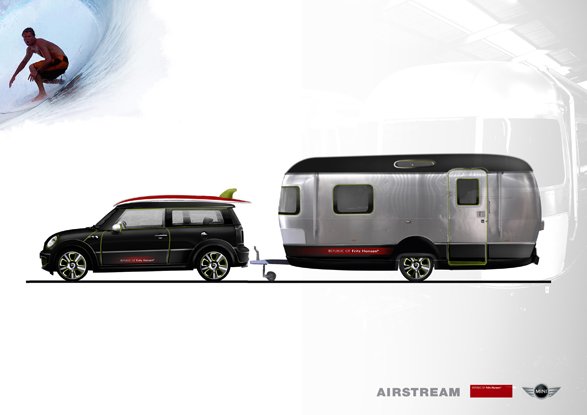 Republic of Fritz Hansen, the Copenhagen based premium furniture brand known for its minimalist and functional design, has spared no details when it came to designing the interior of the MINI Cooper S Clubman and Airstream trailer. Drawing inspiration from the outdoor lifestyle of surfing, the Airstream interior will feature, amongst others, new interpretations of Arne Jacobsen’s EggTM and SwanTM Chair and a table set up with four unique Series SevenTM chairs, allowing plenty of room for guests. Sleek wood panelling will top it off giving it the ultimate “modern surfer” look. “Here at Republic of Fritz Hansen we are thrilled with the collaboration and really look forward to introducing this unique and eye catching concept,” says Jacob Holm, President and CEO at Republic of Fritz Hansen.

The MINI Cooper S Clubman will also reflect the same adventurous personality and style with clean lines, bold colours such as lightning green and all the interior gadgets you can expect to find in a MINI plus more.

The MINI Cooper S Clubman will be predominately jet black with black “wetsuit” neoprene accents along with green trim. The 22ft silver Airstream trailer will also enjoy the same exterior details as the MINI but will have an interior designed for beach goers with features such as a waterproof interior and a sun bathing bed.

“Partnering with MINI was a given,” said Bob Wheeler, CEO of Airstream, Inc. “As one of the oldest manufacturers of recreational vehicles in the U.S. and MINI’s longstanding history producing unmistakable sport cars, we knew that we would make a dynamite team,” said Wheeler.

“It has always been important for us to implement new products and ideas in unconventional ways. The concept MINI and Airstream, designed by Republic of Fritz Hansen, presents a surprisingly different way of using a MINI and an Airstream with a design, which consciously transcends into the world of the surfer. At the same time, we have achieved a successful co-operation with two international cult brands which authentically embodies the MINI attitude to life” said, Andreas-Christoph Hofmann, Head of MINI Brand Communication.

Shifting gears is without doubt a thrilling experience in the top model MINI Cooper S Clubman. Boasting a 1.6-litre four-cylinder power unit developing maximum output of 128 kW/175 hp at 5,500 rpm with the help of a twin-scroll turbocharger and direct gasoline injection, the MINI Cooper S Clubman offers maximum torque of 240 Newton-metres or 177 lb-ft all the way from 1,600 to 5,000 rpm, with a further brief increase to an even more significant 260 Newton-metres or 192 lb-ft by means of the Overboost function. On the road, this accelerates the MINI Cooper S Clubman to 100 km/h in just 7.6 seconds and gives the car a top speed of 224 km/h or 139 mph.