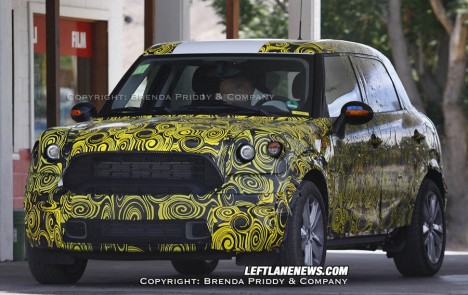 Over the next few years MINI will focus on performance. The speedster and the coupe will lead the way with light body shells and some unique performance options. However MINI will look to extend this new drive towards performance vehicles with one if not two new models of the Countryman crossover vehicle.

As we’ve reported Countryman crossover vehicle will be launched initially in Cooper and Cooper S. Up to two different diesel models will follow shortly afterwards. Then sources are telling us that the Countryman will get a JCW model with the current JCW powerplant.

However there are rumors of a more focused and even stripped down performance version featuring the award winning BMW 2.0L diesel powerplant. In current BMW trim, this engine delivers an astonishing 295 lb ft of torque and 204 hp.

Styling will feature a distinctive aero-kit (with wider arches) and 18″ X spoke wheels. Like the current JCW aero-kit, look for a blacked-out grille with a larger airscoop.

According to sources, current thinking is that the interior would sport four individual buckets and unique interior trim. Of course exclusive exterior and interior colors will be part of the package.

The one big unknown at this point is whether the car will feature the traditional front wheel drive or the new all-wheel drive system that will be optional on other Countryman models. Oh and then there’s the US availability question considering the diesel powerplant. We’ll know more in the coming months.