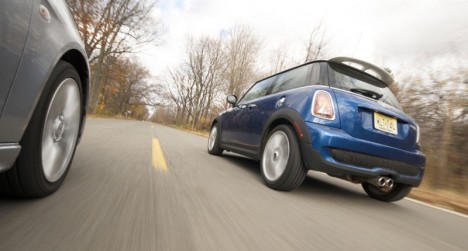 Winding Road Magazine took some of today’s hottest hatches out to rural Michigan for a thorough testing recently as a way to introduce the new VW GTI. It was a test set-up for the GTI (Motor Trend’s newly crowned car of the year) to win going away. Yet it didn’t. And even more surprising, it wasn’t the MazdaSpeed 3 or the Mitsu Lancer SST. No it was the oldest car in the group that came away with the overall win. That car is the 2009 R56 MINI Cooper S. Here’s an excerpt:

>So the Cooper S Seems, on paper, to be the middle child of the group of hot hatches_ not terribly exceptional in anyone area. Yet, we can’t help but love it the very most. Why?

>For starters the MINI is far and away the most engaging car on the test here. The Mazda may bark louder, but the MINI communicates with the driver via seat and steering wheel. It’s also the only car that feels honestly nimble- though the GTI comes very close. The other two hatches have no problem feeling confident on the road, but we can always tell that they’re fighting their on weight or power at different times. MINI is more like a natural athlete, living within the boundaries of its own considerable ability.

>We’ve mentioned the lack of outright power, but MINI’s engine is also the least laggy, with a powerband well suited to dodging and dicing with city traffic.

>…the MINI, even after all these years, just comes together to make a more perfect thing than the rest.

You can read the entire article (and magazine) here.

It’s fantastic to see the MINI still doing well in comparison tests after four years on the market. With the mid-cycle refresh just month away from its debut at Geneva, BMW seems relatively well positioned for this generation of cars to be competitive for most of their lifespan. And even if they don’t match spec for spec (MINI’s rarely do) the nature and characteristics of the MINI put it on a unique playing field. However that 2011 model year refresh better be good. We have a feeling that the Fiat 500 and other hot hatches (some of which are coming to the US for the first time) won’t sit still over the next few years.