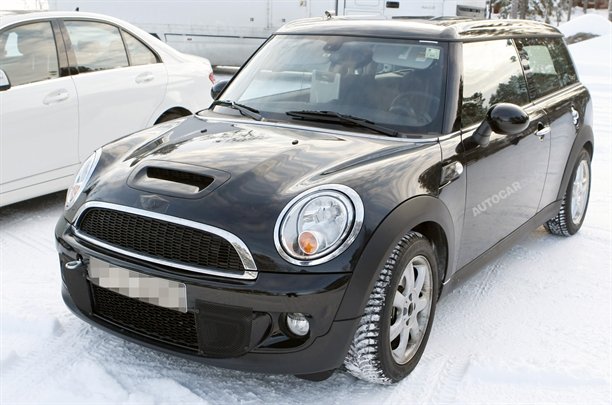 Yes the names keep getting longer. But the engines are also getting both more power and more efficient. Behold our first look a the Clubman version of the upcoming Cooper S Diesel. We first told you about the new hot diesel last year about a curious MINI prototype with went down the Oxford production line with BMW’s highly acclaimed 2.0L diesel. Now Autocar is showing us picture of an R55 Clubman with the engine and some new front air intake meant to cool the new mill. According to Autocar output will be around 150bhp and torque could be as high as 250 ft lbs based on the output with the same engine in the BMW 118d.

Also mentioned in the article is further rumor of a JCW version using the engine. As we’ve reported previously the same 2.0L BMW diesel is also at the heart of the 123d which has an output of over 200 bhp and close to 300 ft lbs of torque. However we can imagine BMW would consider retarding some of that torque either across the entire range or at lower RPMs to help alleviate what could be biblical torque steer.

And now for the bad news for our US readers. Due to engineering costs to cleanse diesel powerplants in a few states (i.e. California) Munich has nixed the chance of these engines of coming to MINI’s largest market. Despite MINIUSA’s interest in bringing them over, it appears the ship has sailed when it comes to R55 or R56 diesels in the US.

One note about the impending refresh of the 2011 models. What you see above is no indication of how those cars will look. Autocar unfortunately jumped to some incorrect conclusions with it comes to that part of the story.

Cnet Takes a Look at the MINI Concept

The Next MINI Becomes More Clear