We sat down with MINI USA Product Manager Vinnie Kung this week armed with loads of questions (many of them yours) around the highly anticipated MINI Countryman crossover. But before we get to what we think is one of the best interviews we’ve ever had on MF, we have to give Vinnie a huge thanks for being (as always) smart, humble and hilarious at all the right moments. MINI is lucky to have him and we’re thrilled to have a chance to talk with him.

Today we’re going to give you the first part of our interview where we talk about US pricing, curb weight, R60 JCW and even the WRC rumor. Look for part 2 Monday for even a few more (hinted) bombshells. Ok, onto the interview…

MotoringFile: First off thanks for taking time to answer our readers’ questions on the MINI Countryman. As you may have seen the R60 has been enormously well received given out expectations and naturally there are lots of questions. So letâ€™s get right to them…

To start with, Vinnie, Tennessee Kung? We have to ask, where does the “Tennessee” come from and what do I need to do to get a state as a nickname?

Vinnie Kung: At the time, a seriously confused Chinese redneck living in Knoxville Tennessee, thought it would be funny to name his child â€œTennessee.â€ So, to find a person who would help realize this practical joke, he left a bottle of Jack and a carton of Lucky Strikes on the front stoop and my thirsty mother thought it was a great idea as well. But, the deal was, it had to be the middle name.

MF: A fair trade then? Ok middle names aside, letâ€™s get to why we’re here. First question; with all the anticipation around the Countryman, people are dying to know when we can expect to see this car in the US market?

VK: The car is planned to land here in the first quarter of next year, several months after the European markets get it. This staggered launch was always part of our plan because of the transition from the BMW X3 to the MINI Countryman. Unlike the Oxford plant, where every tool and part is already in place to build a MINI, the Magna-Steyr plant will have to switch everything on the floor. Even though the manufacturing team is incredibly quick in making this happen, itâ€™s nearly impossible to switch from one completely different car to the next and to build the new car at full volume from the start. We think there is an advantage for the US, since the plant will have already produced thousands of R60s before we get our first one, and this helps ensure high build quality for the US. By the way, BMWâ€™s own internal quality audits show that X3 has the highest build quality of all its products.
.

MF: Good know. What about US pricing? Has that been sorted out yet?

VK: Pricing has not been finalized. Itâ€™s the typical bean counter versus product planning discussion you hear about in automotive folklore. We want more content for free and to keep our options priced really low. Meanwhile, the guys at the cash register want us to increase prices to make more money. This goes back and forth for months with charts, charts and more frigginâ€™ charts but as of now, we are priced between the Clubman and the Convertible for the FWD Countryman models. The ALL4 version will be about 6% more than the Cooper S Countryman.
Â
MF: When are we going to specifications like weight. I’m specifically interested to know how much heavier the R60 will be over the R55.

VK: Considering the huge increase in interior space and the modest increase in overall size, our target is to get the weight to around 3,000 pounds in US trimâ€”basically, itâ€™s like driving an R55 with a full-sized passenger next to you.
Â
Q: The fact that the rear seats slide fore and aft is a great idea but how helpful is it in the real world. How much legroom will it actually give you?

VK: There is more rear legroom than in the Clubman, but the primary goal is to give you the flexibility in cargo capacity. Once we get the officials at the EPA to do their measurements, we can put actual numbers to our claims.
Â
Q: What about the roof rack. Will it be functional? Will it be similar to the BMW system or the current MINI solution? VK: This is an all-new roof rail system. The rails are very low profile and will be standard on every Countryman for the US. It is unlike anything that BMW or MINI has ever done. They go lengterhwise along the sides of the roof and each have a cross-section of aÂ  low-profile T. Itâ€™s only a half-inch tall so you can barely see it. Florian, our head honcho over at MINI Accessory Development, has several items already planned that will attach to these rails.
Â
MF: The All4 system. Can you tell us about some of the tech behind it?Â Did I read correctly that, under certain circumstances, 100% of the power will be delivered to the rear wheels?Â How much does it help dry performance? How badly does it hurt MPG?

VK: The intelligent all-wheel-drive system is so profound, not just for MINI, but for all crossover vehicles. We stole xDrive technology from those BMW guys so not only is the system smart, it is super fast and in essence, able to send engine power from wheel to wheel almost instantly. To optimize handling and performance in the dry, wet and snow, the center diff is electronically controlled to instantly transfer torque from front to back.
Â
The rear diff uses an wet clutch pack actuated electro-hydraulically. The front wheels uses EDLC, where the brake calipers control wheel-spin between the two front wheels.
Â 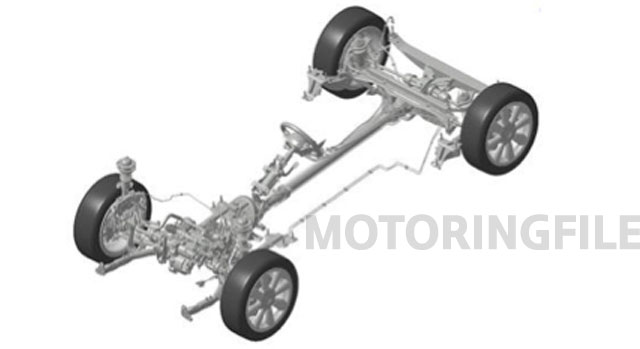 Any all wheel drive system will inherently reduce fuel economy because of the additional drivetrain inertia. Luckily, our engineers have managed to use the latest low-resistance bearing assemblies and lightweight components to help boost fuel economy, performance and Â most importantly, safety.
Â
MF: Speaking of MPG, is the R60 going to feature MINI’s start stop system used outside the US market?

VK: This is one of those classic price versus volume conundrums and it all hinges on take rate in the US compared to Europe and Asia where gasoline costs two to three times as much. So, let me re-enact how this went down. Like todayâ€™s MINIs, Auto Start/Stop only works on the Manual transmission. In the US, the majority of MINIs (about 62%) are equipped with the Automatic trans, which means only 38% (about 18,000 per year) of all US MINIs are eligible for the ASSF (Auto-Start/Stop Function.) So, because there is a smaller base, the price instantly doubles just for us to break even on the business case. So, imagine instead of $250, it is now $500 extra for every manual transmission MINI to get this option. So, what we just did with the price increase was drop take rate even more. Worse yet, appeal would be low for the majority of MINI owners because there would be no difference on the fuel economy figure because the EPA does not recognize ASSF in its test cycle, so the window sticker would show no improvement, despite the real-world increase of 1-2 mpg in the city. So, not every manual-trans MINI owner will want to pay $500 for something that theoretically gives them nothing, so if we put in a realistic take rate of 20% on those manual MINIs (3,600 cars), weâ€™re now looking at $1,000 for this option, just to break even. Whoâ€™d buy it then? Give it about two years, and weâ€™d have to discontinue it. This is the type of stuff we go back and forth with all day. It kills me not to have it here, but the market dictates what we bring here.
Â
MF: Ok, you’re officially off the hook. I suppose it’s up to us to pressure the EPA to took another look at their standards. Let’s turn to the other end of the spectrum and talk JCW. What can we expect from JCW when it comes to the R60? We’ve heard the rumor and it would seem that there are big plans?

VK: The rumors are somewhat true and somewhat not. We talked about it a few times last year and nothing more had become of it. Itâ€™s been quiet since because weâ€™re already working on the next-generation MINIs, so thatâ€™s where we will concentrate on JCW.
Â
MF: And what about the WRC rally rumor that won’t go away? Anything you can comment on?

VK: I can neither confirm nor deny, but all the ingredients are there. BMW recently left one form of motorsports and there are a lot of resourcesâ€¦

With that (hinted) bombshell you’ll have to come back Monday to hear more from our interview. Specifically we’ll be talking diesels, center rail options and the possibility that the Countryman will ultimately kill the Clubman.

The MINI's Subtle Changes Over the Years