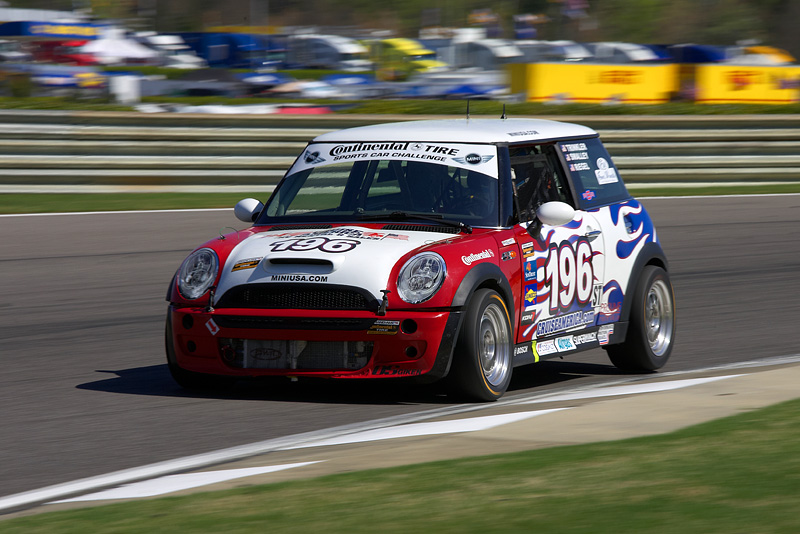 As we highlighted last week, the RSR MINI’s are having some good success in the Continental Tire Sports Car Challenge. This weekend sees them coming to Lime Rock, a track well suited to the MINI’s strengths with great potential for further podium appearances by the team.

Official Release: LAKEVILLE, Conn.â€”RSR Motorsports heads to Lime Rock Park this weekend for the fifth round of the GRAND-AM Continental Tire Sports Car Challenge, and they are ready to race on a track that was made for MINIs.

â€œLime Rockâ€™s tight track really serves the MINI well because of the carâ€™s cornering and maneuverability,â€ says Dicky Riegel, who will co-drive the No. 196 RSR Motorsports MINI Cooper S with Owen Trinkler. â€œThe corners at Lime Rick are fairly demanding, yet they present passing opportunities for the MINIs that other cars may not have.â€

Riegel, who lives just one hour away in Bedford Hills, New York, considers Lime Rock his home track. He will really live the â€œLime Rock experienceâ€ during the weekend: Riegel and his children will arrive in a 1954 Chevy pick-up towing a restored 1954 Airstream trailer. They will camp in the infield all weekend in vintage style.

â€œThe team is really excited about this opportunity and what (team owner) Randall Smalley has done with the facility,â€ says Trinkler. â€œI think weâ€™re all looking forward to preparing the cars in-house at this new shop.â€

VJ Mirzayan and Sarah Cattaneo have suffered a string of misfortunes at the past two rounds, but they feel the No. 197 RSR Motorsports MINI Cooper S is a contender for the win at Lime Rock.

â€œWeâ€™ve got to take our recent experiences, learn from them, and move on,â€ says Cattaneo. â€œLime Rock is probably the best track on the schedule for us. Itâ€™s all about cornering and the balance of the car, and the MINIs are perfect in those aspects.â€

â€œLime Rock isnâ€™t a simple track. There is no room for errors there,â€ adds Mirzayan. â€œI think weâ€™re due for an opportunity to showcase what weâ€™re really capable of, and hopefully this race will afford that opportunity.â€

BJ Zacharias and Craig Conway will be back in action in the No. 198 RSR Motorsports MINI Cooper S. They missed round four at Virginia International Raceway following a fire at Barber Motorsports Park.

â€œI am looking forward to driving the No. 198 MINI: now that it has the new wiring and Bosch system, it should be more reliable and faster than ever,â€ says Conway, whose Lime Rock credits include a class win. â€œThe RSR team works hard and I think we will win soon.â€