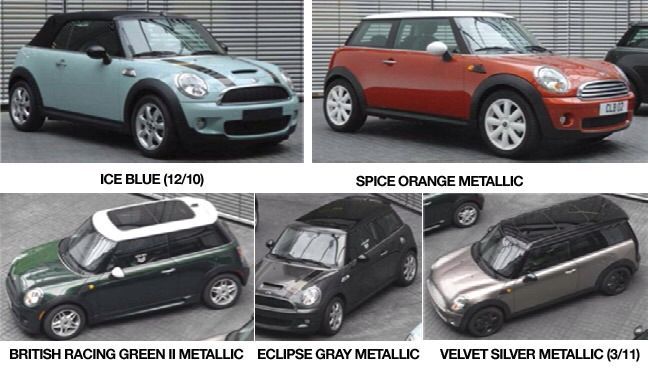 Earlier in the week we gave you a high-level look at the 2011 MINI. Updated exterior and interior styling along with tweaks to the engines are the highlights but there’s hardly a part of the car that MINI has tweaked or rethought. So today we’re going to talk about the new colors that will be coming online for 2011.

As of August production, we will see Spice Orange, (a strong metallic Orange) that will be available on all R56 and R57 models (not the R55 Clubman.) We also get British Racing Green II, which is lighter and closer in shade to the iconic BRG of decadeâ€™s past. Lastly, we get Eclipse Gray metallic, which replaces Dark Silver metallic. Some color shuffling will then allow White Silver to be freely available on all models. Later, Ice Blue (non-metallic) will arrive with December 2010 production on the R55 Clubman and R57 Convertible. Finally, in March of 2011, we will then see Velvet Silver replace Sparkling Silver.

The best part? 2011 ordering is officially underway at your dealer (prices will be announced late next week). The updated configurator won’t go live until August but your dealer has production slots and all information needed to start order 2011s

In the coming days we’ll continue to take a closer look at the updates throughout the range both inside and outside the car.

Drive Takes the JCW GP to the Silver State Classic