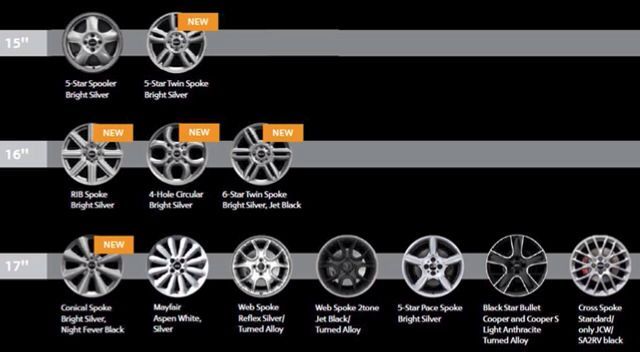 Five new wheels are being introduced with the 2011 refresh. Starting with the Cooper, we see a new 15â€ wheel for the base model and all the 16s are being replaced with new designs (as seen above).

The Rib Spoke replaces the standard S-Winder on the Cooper S models and the 4-Hole Circular is an alternative for both Cooper and Cooper S cars. The 6-Star Twin Spoke is also available, and is the only 16â€ that can be had in either Bright Silver (standard) or Jet Black as a no charge option when you specify option 2RV.

The biggest news in our opinion is the new 17″ wheel that comes with the sport package on the Cooper S. The 17â€ Conical Spoke will officially replace the much maligned Crown Spoke. Finally turning to the JCW, the 17″ Challenge Spoke will now be offered in black as a no charge option. It’s a great look for the JCW especially considering the bright red caliper that suddenly becomes all the more noticeable.

Peter Doulman Talks About the MINI Challenge in Austrailia