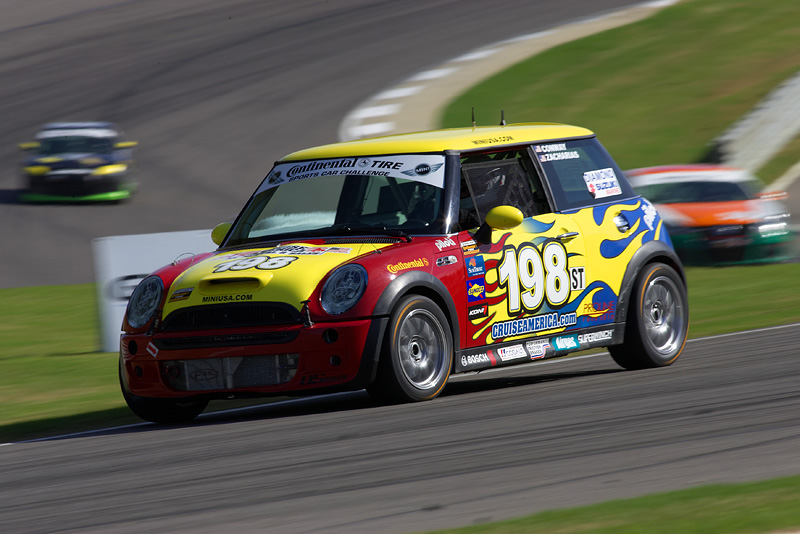 Well, the effort has paid off. The RSR team notched it’s first victory of the season this past weekend at the New Jersey Motorsports Park. Great team work, sound strategy, and some cool driving by Smalley and Trinkler combined for the win.

MILLVILLE, N.J.â€”RSR Motorsports had a weekend of firsts during round eight of the GRAND-AM Continental Tire Sports Car Challenge Series at New Jersey Motorsports Park. Randall Smalley and Owen Trinkler earned the first series win for both RSR Motorsports and MINI, and they did it in the first car built entirely in-house by the RSR crew.

Smalley and Trinkler gave the No. 198 RSR Motorsports MINI Cooper S its first shakedown run on Thursday, following a complete rebuild of the car. Under the guidance of chassis engineer Jim Haaser, the MINI was fitted with a Bosch engine management system and tuned for optimum performance in endurance racing.

Smalley started the race on Saturday, and he pitted during a caution period to hand the MINI over to Trinkler. The green flag stayed out long enough for Trinkler to work his way to first. The team knew fuel mileage would be a close call, though, so Trinkler dashed to the pits during another caution for fresh tires and a splash of fuel.

The pit strategy paid huge dividends: Trinkler re-entered the race in sixth and was able to re-take the lead. From there, he pulled away to a 16.071-second lead, taking the checkered flag first in the Street Tuner class.

It is fitting that the first win for RSR Motorsports comes from team owner Smalley and team manager Trinkler. â€œThis has been a long time coming and I couldnâ€™t be more excited,â€ says Smalley. â€œItâ€™s nice that Owen got our first win; heâ€™s worked so hard to make this happen. Iâ€™m really happy for everyone on the team.â€

â€œThis validates everything weâ€™ve done over the past six months,â€ says Trinkler. â€œWeâ€™ve made the MINI competitive, and Randall has given us the tools to do it. We got a little taste of the future with this race, and now we know how competitive we can be.â€

Smalley and Trinkler werenâ€™t the only RSR Motorsports drivers who had a successful weekend. Sarah Cattaneo and VJ Mirzayan finished seventh in the No. 197 MINI Cooper S. It marks the best finish to date for the co-drivers.

Cattaneo started the race and ran in third before pitting to hand the No. 197 MINI to Mirzayan, who re-entered the track in 12th. â€œI was in a pack of six cars from the time I left the pits,â€ says Mirzayan. â€œI knew that was my race right there, and I tried to get around each car without wasting my tires.â€

Mirzayan did just that, crossing the finish line in seventh. He is quick to praise his co-driver Cattaneo, as well as Haaser. â€œJim is a very good engineer, and his presence has been a turning point for us,â€ he says.

â€œThe team has come really far,â€ agrees Cattaneo. â€œEveryone has worked so hard to give us a great car. These guys worked all weekend to get us this finish.â€