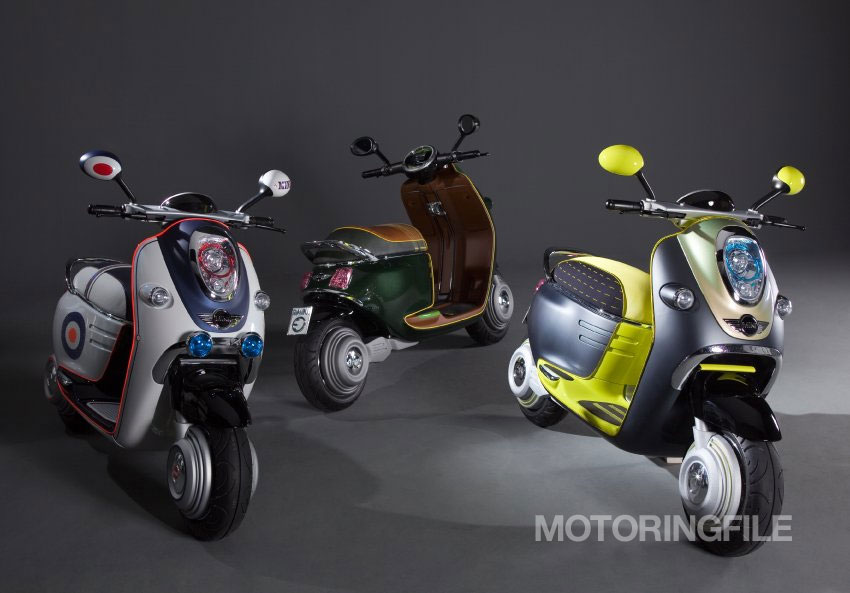 A fully electric scooter with an integrated motor in the hub of the rear wheel and a retractable power cord. How cool is that? Oh and it’s from MINI? Even better. MINI is taking the brand to new places with the MINI Scooter E concept. But the best part is that this is looked at as more than a concept within BMW and MINI. The brand is focused on not only carrying on the tradition of the MINI brand but extending its core ideals into new categories that have never been thought of. We’ve seen this in marketing, now with the Scooter E, we’re seeing this in product.

The Scooter E will be fully unveiled in the coming days at the Paris Motor Show and much attention will be focused on consumer reaction. However internally many at BMW and MINI are betting that the idea will be quickly championed by the press and public as a new sustainable way to travel in urban environs.

The scooter (which will come in three varieties as seen above) is powered by a lithion-ion battery and an electric brushless motor that can be charged using a standard power outlet. The three versions differ in color scheme and some design details:

The scooter’s main instrumentation comes courtesy of the rider’s iPhone which docks into the scooter itself. All the normal scooter display functions will be there along with entertainment and navigation options.

Alongside the three scooter concepts will be the first public unveiling of the MINI WRC Countryman. The show starts October 2nd but press days begin next Wednesday the 29th of September. Look for a full gallery of all concepts on MF around that time.