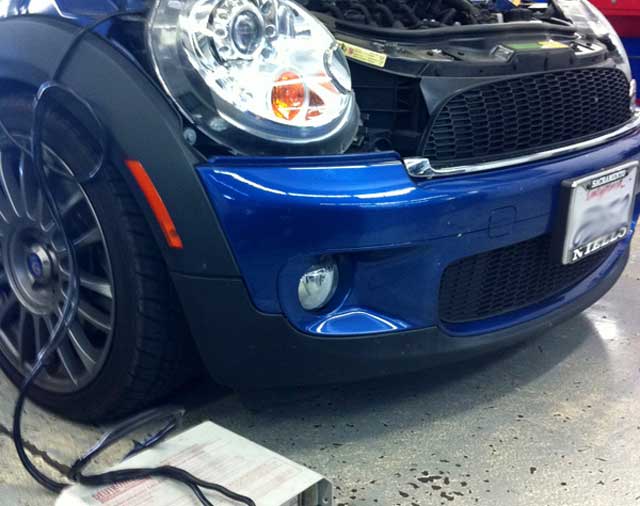 Updated: MINI hasn’t officially released this fix. The dealer alone was responsible for it and MINI USA has not released a torque steering fix and has not given dealers any information about this update. This fix was only done to one car as a test and the cost was to simply pay for the labor. That said (and here’s the real news) the simple task of updating a 2007 MCS with software for the 2011 MCS did eliminate the torque steer as hoped. For some background on the software (standard on all 2011s) check out this previous article.

After talking to a technician and service advisor, they agreed to experiment on my car. It worked and they have done a couple others since. The price of $165 was the labor to perform the update. Again this is only being done at one dealership at this time and will not be available at your local MINI dealer just yet. A free update on the JCW has not been confirmed by MINI USA.

We’ve reported previously on Motoringfile that the 2011 MINI mid-model refresh includes new programming to eliminate torque steer in the MINI range. This software update coordinates the traction, stability and ABS systems to counter and eliminate torque steer. We’ve seen the results first hand on MTTS and they’re impressive. The burning question remained, however, would this fix be retroactively installable on pre-2011 R56/R55/R57 MINIs? The answer appears to be yes!

We’ve received word that a software update will be made available to owners soon. Pricing is a little unclear. One of our readers paid $165 for the update but that could simply be an hour of labor charged from the dealer. If so it would mean MINI is handing out the update for free and allowing the dealers to tack-on whatever labor they typically charge for a software update.

Our sources also tell us that on their 2007 MCS, the update performs as promised: no more torque steer. There are still some unanswered questions (will JCW owners get this free for starters) but it’s available starting today.

See your local service advisor for more details and let us know how the update goes on your MINI!