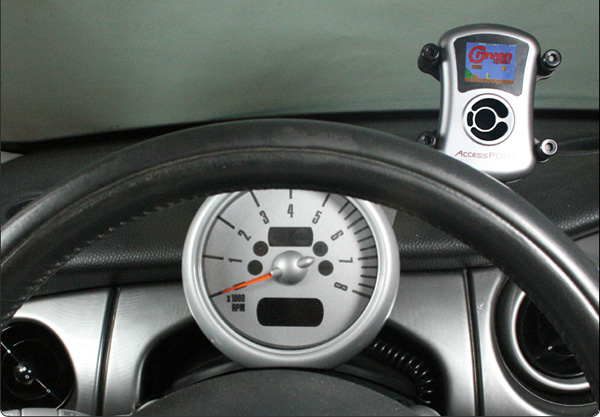 MINI aftermarket company CravenSpeed is most famous for its system of mounting auxiliary gauges to the tachometer. This provides the driver with additional information like volts or boost that stock gauges don’t measure. CravenSpeed has adapted that same system of mounts to hold smart phones.

Given the frequency of smartphone design changes, I thought that the best solution would be that which could be used throughout the life of the car, rather than for the lifespan of the particular phone. CravenSpeed’s solution is a spring-loaded scissor clip. All the major parts of the device are made from metal and the four posts which hold the phone in place are rubber wrapped to ensure a good grip on the device.

The unit is shipped in a no-frills box with the metal bracket and scissor assembly and a baggie full of the necessary screws and washers. Installation was fairly easy, but CravenSpeed’s website lacked comprehensive instructions for the first-generation cars. Everything fit fairly well and the mount feels solid.

One of the great things about this mount is that it is completely customizable. I found that rather than having my phone stick up above my tach, I wanted them to be side-by-side for quick glances between the two. All it takes is an adjustment with an allen wrench to change the positioning.

The scissor mount is a great design on paper but I’ve found that it’s a little touchy with my iPhone. Firstly, because it’s a universal mount there is no ‘correct’ way for the scissor mount to grip a phone. This means you can theoretically stick a phone any way you want but given that most smartphones have some kind of button on the side (volume rocker, camera switch etc.) you have to work around those buttons. On my iPhone, the volume rocker and a mute switch are on the upper left edge of the phone. When the phone is out of a case, I have to pinch it down lower on the body of the phone which in turn puts the phone off balance and causes it to tip side to side during hard cornering. However, on my Palm Pixi which I occasionally use as a backup phone, this was a non-issue. As the internet likes to say- YMMV.

After using the mount regularly for a month, I’ve found that any shortcomings it had vanished when I realized how durn useful it is. Although I would likely have given it a 3.5 out of 5 at first blush, I don’t think I would want my MINI to be without it. So I’m giving this product a 4 out of 5.