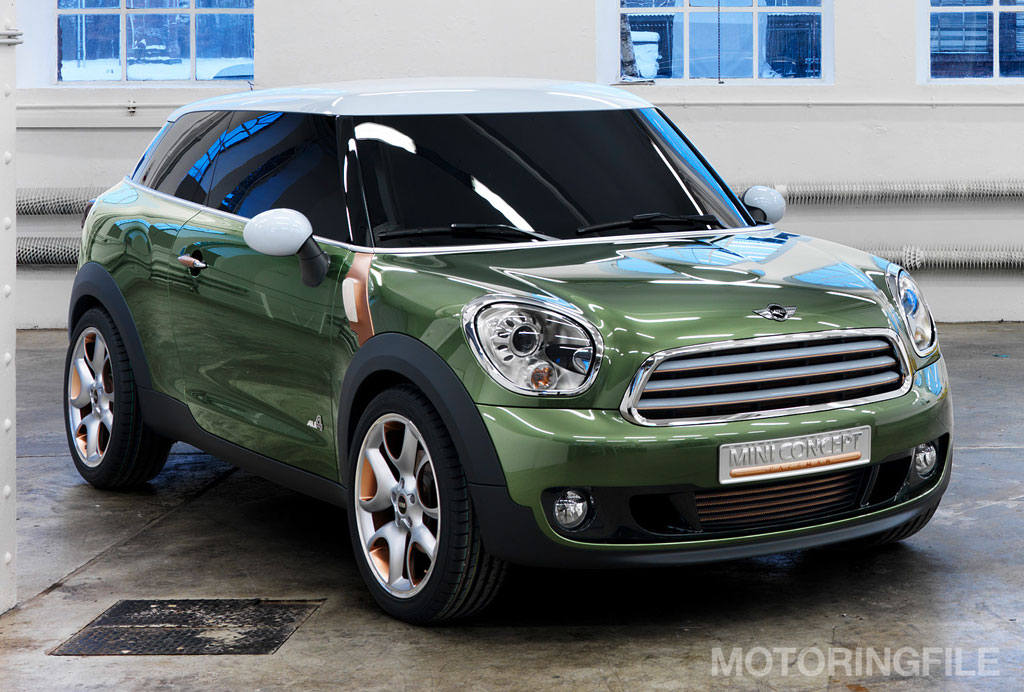 Today MINI takes the virtual wraps off of their latest concept vehicle: the Pacemen. The crossover coupe is based on a shortened Countryman (R60) platform and borrows a few prominent exterior elements as well. But there are also many new elements seen here for the first time that could give us a sneak peak at a future production MINI. The Paceman; lowered 20 mm in the roof and shod with 19″ wheels is the picture of British dynamic elegance. Think of it as a smaller Range Rover Evoq that doesn’t take itself quite as seriously. Or you could also consider it the Countryman version of the upcoming MINI Coupe; focused more on performance and style while eschewing some versatility.

Our sources at MINI tell us that no official production plans have been made for the Paceman, but MINI is already making plans early plans to do so. MINI would ideally like to do a three and five door version (with rear hinged doors chafed with the next Clubman) that both share the lower roofline. The platform is proven, and the production facility in Austria has room to grow so it’s all possible within the next few years. Beyond that, wouldn’t the Paceman be a great starting platform for a future WRC car?

The concept will debut at the Detroit International Auto Show in early January and we’ll be there to cover it all.

Look for more on the Paceman shortly on MF. 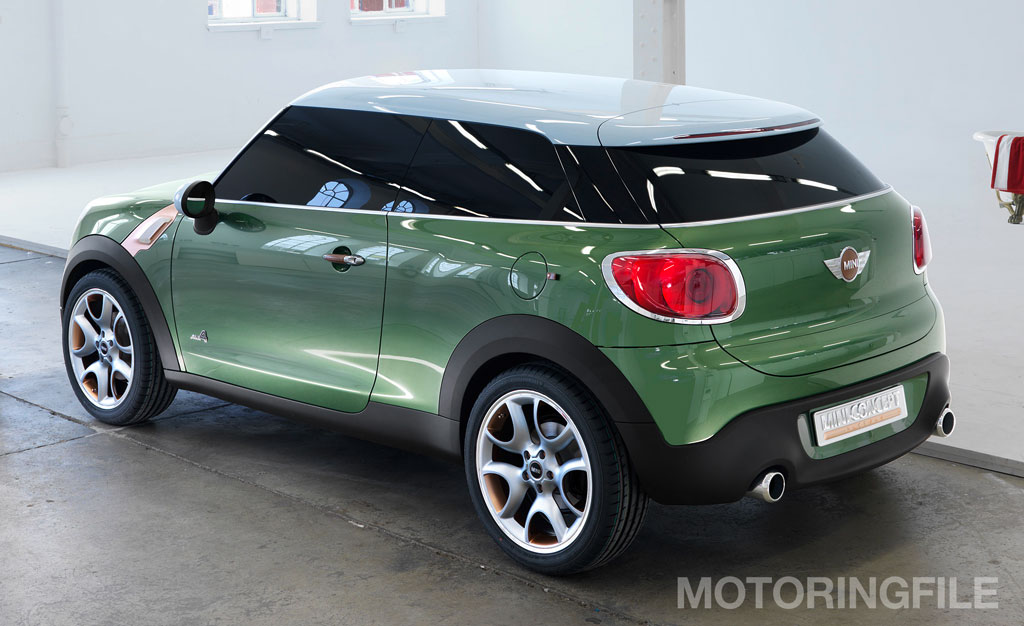 Official Release: The MINI Paceman Concept retains the familiar MINI face but adds its own distinctive flavor. Large headlights with chrome surrounds extend deep into the front wings, and together with the distinctively contoured bonnet, emphasize the imposing nose of the Paceman. The radiator grill is essentially the same as that of the Cooper S Countryman, with additional air intakes in the bumper to deliver improved brake ventilation. The front bumper also includes new, deep-set fog lights. (Full gallery after the jump)

From the side, the MINI Paceman Concept features a fresh interpretation of the front wing and side indicator that attracts the eye from the A-pillars down to the unique design 19-inch front wheels. This rugged and sturdy design element is complemented by dark wheel arch surrounds with matching side skirts that emphasize the masculine, sporting nature of Paceman.

The familiar MINI shoulder line rises towards the rear of the Paceman Concept and also hints at its sporting intent. Less familiar is the glass and roof treatment. As the waistline rises, the flat roofline flows into a wider C-pillar that appears to be transparent. The windows appear to wrap around the car like a band of glass with the roof â€˜suspendedâ€™ on top and painted in a striking, contrasting white. This is known as the â€˜helmetâ€™ roof. The coupÃ©-style windows taper towards the rear and the whole effect is one of a dynamic wedge shape.

â€œIn contrast to the more vertical design of the MINI Countryman, weâ€™ve given the MINI Paceman Concept a horizontal emphasis and accentuated the width of the car more to underline the powerful appearance of the study,â€ explained Marcus Syring, Head of MINI Exterior Design.

A new interpretation of the classic coupÃ© design has given the MINI Paceman Concept a distinctive coupÃ© tail that complements the athletic character of the car. New rear lights positioned at the outer edges of the broad, muscular rear wings underline the dominance of horizontal lines, which run parallel to one another and emphasize the wide track of the rear axle.

As with the MINI Cooper S Countryman, the rear bumper of the MINI Paceman Concept features a diffuser that channels the airflow between the twin exhausts and further enhances the carâ€™s aerodynamic properties. Even the license plate recess echoes the form of the front air intake in order to forge a stylistic link between the front and rear of the car.

The MINI Paceman Concept measures 161.8″ in length, 70.4″ in width and 60.6″ in height. In archetypal MINI style, the Paceman has short front and rear overhangs to facilitate the familiar go-kart responsiveness. 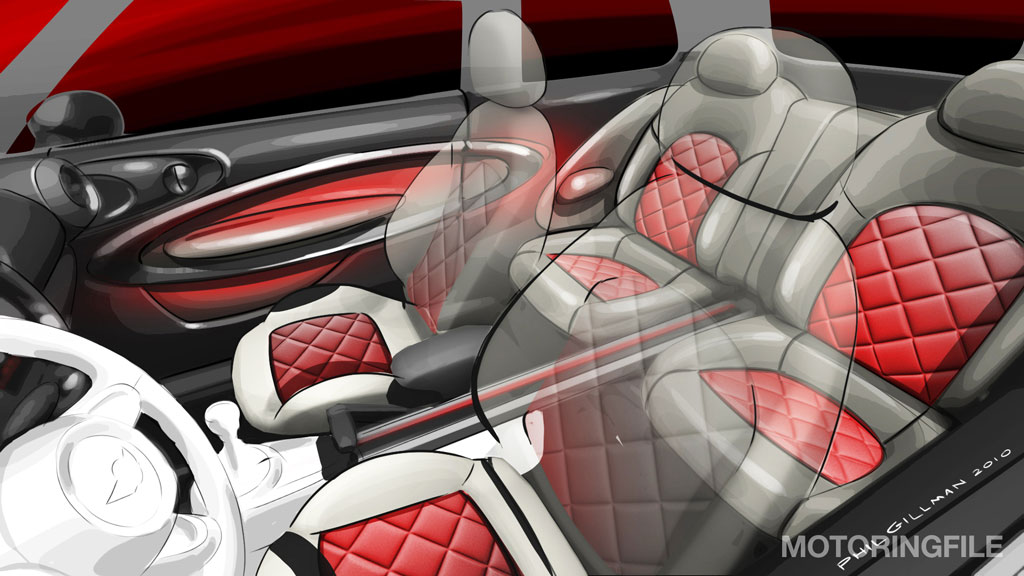 The interior: a blend of modern function and luxurious character.

The interior of the MINI Paceman Concept deliberately draws on MINIâ€™s unique and distinctive design language, yet it also imparts a refreshing new look. Behind the studyâ€™s masculine exterior lies an elegant yet sporty interior environment that exudes premium quality and funky design. The instrument panel of the MINI study is defined by its distinctive, concave forms and the sporting yet functional impression it creates. The central air vents, central speedo and gearshift lever feature outer rings in a contrasting color, while large side air vents underline the MINI character further.

The slim center console â€” which maximizes legroom for the driver and front passenger â€” merges into the Center Rail pioneered by the MINI Countryman. This creates a visual and functional link between the front and rear seats. This unique and innovative U-profile rail system runs along the centerline of the passenger compartment as far as the rear seat backrests. Light shades of leather lend an expression of luxurious allure to the interior of the MINI Paceman, while a new interpretation of the brandâ€™s familiar elliptical door and side trim extends along the length of the cabin, taking in the B-pillar and emphasizing the length of the interior. Shaped armrests with large stowage compartments, ergonomically designed door pulls and the speakers for the sound system are embedded into the main element of this ellipse.

Behind the front sports seats are two contoured, individual rear seats are designed with backrests that merge distinctively into the seat sides in order to create fully contoured passenger support. The â€œclub loungeâ€ character underlines the individual and unconventional nature of the MINI Paceman Concept and helps turn every journey into an experience for the rear passengers every bit as much as it is for those in the front. 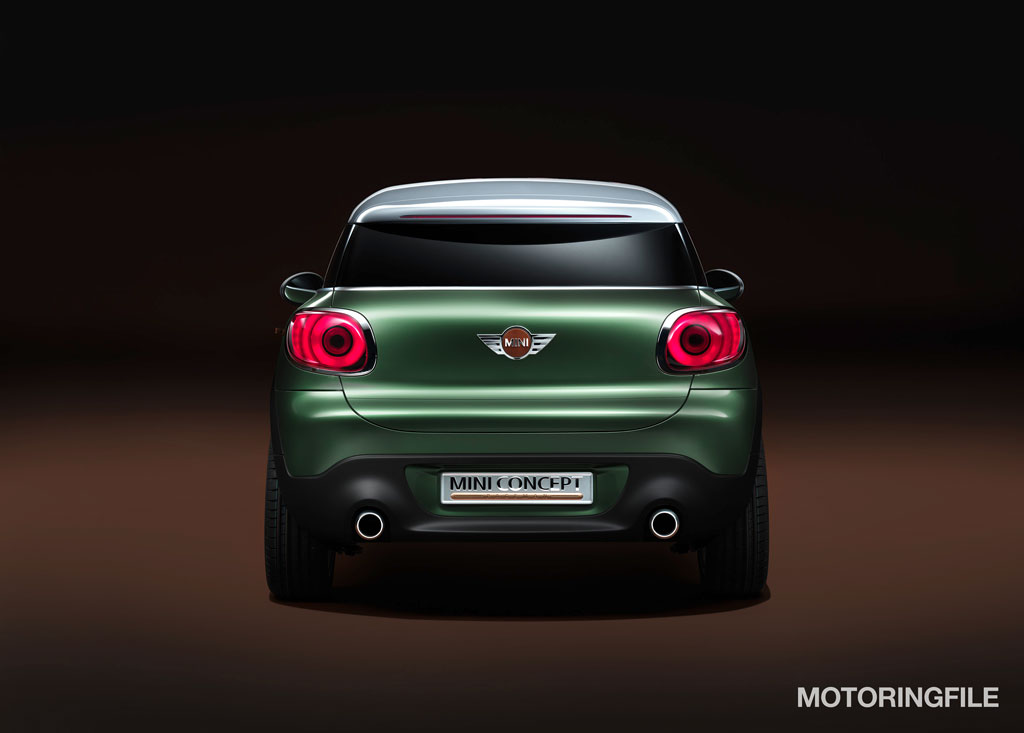 The MINI Paceman Concept has been designed to allow the deployment of the most powerful engine currently available in the MINI range. The MINI John Cooper Works 1.6-liter twin-scroll turbocharged engine gives the MINI Paceman Concept the capacity to deliver the outstanding performance its appearance promises. This 16-valve, four cylinder unit produces 211 hp and generates maximum torque of 260 Nm (192 lb-ft), the latter value having the capacity to reach 280 Nm (207 lb-ft) in brief bursts thanks to the Overboost function.

Its MINI Countryman roots give this new MINI concept study an ideal platform for the MINI ALL4 permanent all-wheel-drive system. ALL4 features an electromagnetic center differential positioned directly on the final drive, which varies the distribution of power seamlessly between the front and rear axles. In normal driving conditions 100 percent of the drive is sent to the front wheels, and in extreme situations as much as 50 percent can be directed to the rear. 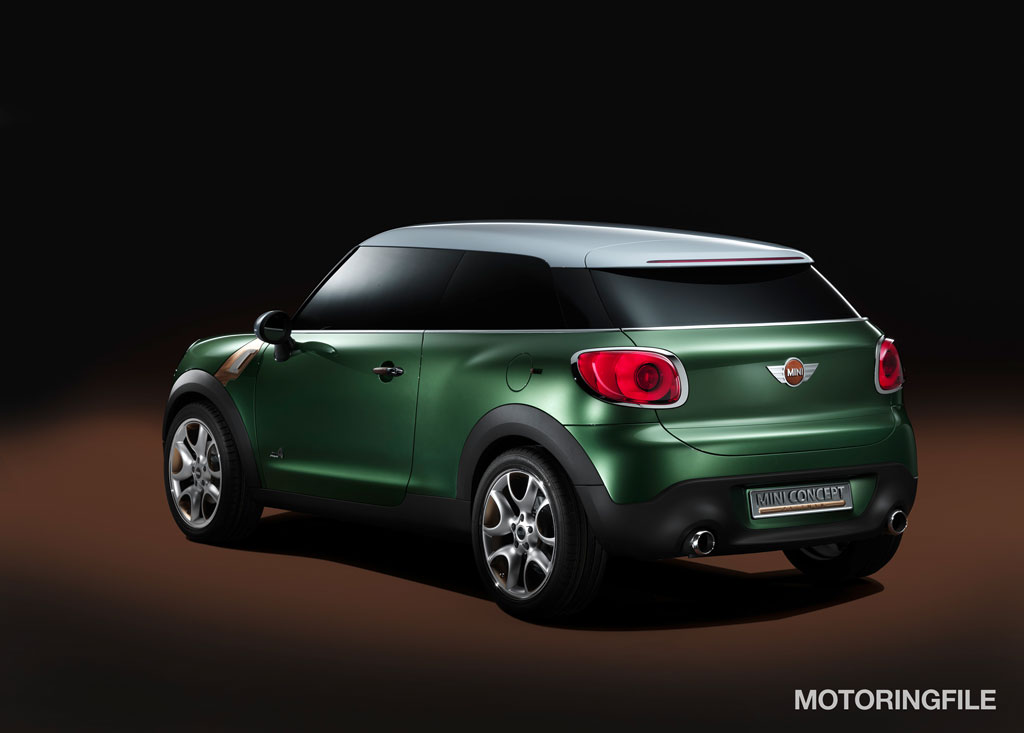 Chassis: the best handling characteristics in the segment.

MINI chassis technology has been specially developed for the MINI Paceman Concept to transform the potential of its potent engine into a driving experience that offers inspiring agility, impressive poise and always in complete safety. While it delivers precise and sporting handling it is the high standard of compliant ride comfort that truly sets the MINI Paceman Concept apart.

MINI Paceman Concept: an idea ahead of the game, once again.

The MINI Paceman Concept embodies the idea of an incomparable driving experience in a way that meets the needs of modern lifestyle-oriented customers, but it also remains true to the character of the MINI brand.