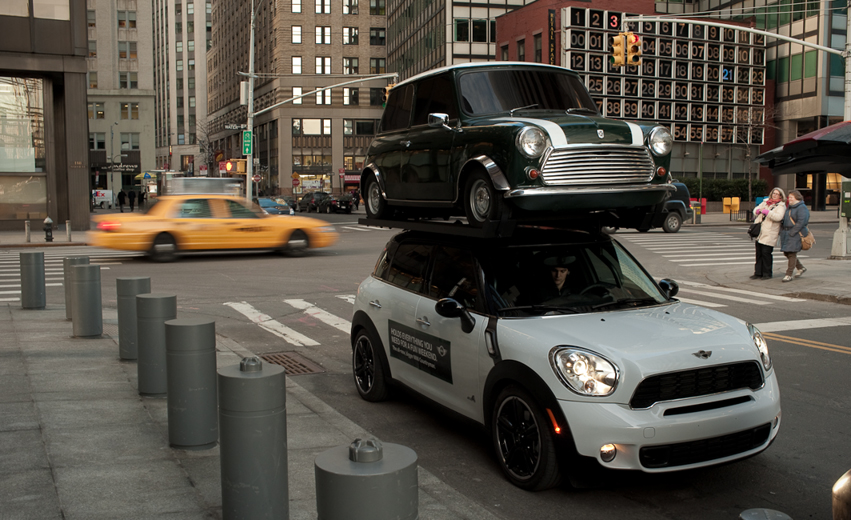 Thanks to everyone who sent this in.

The 2002 launch of the MINI in the USA brought us some of the most interesting and unexpected advertising the automotive world has seen before or since. Without the budget for big TV ad buys, CP+B focused on a blitz of print, outdoor and environmental advertising. One of the more noteworthy examples was this stunt involving a Cooper on the roof of a Ford Excursion in NYC:

This not-so-subtle commentary on America’s obsession with SUVs was pretty bold, but it also said something deeper. Placing the smallest car you could buy on the roof of the largest SUV available made an audacious statement about what driving fun really was. Sure, that SUV may haul a lot of gear, but that MINI sure looks like a good time on four wheels. 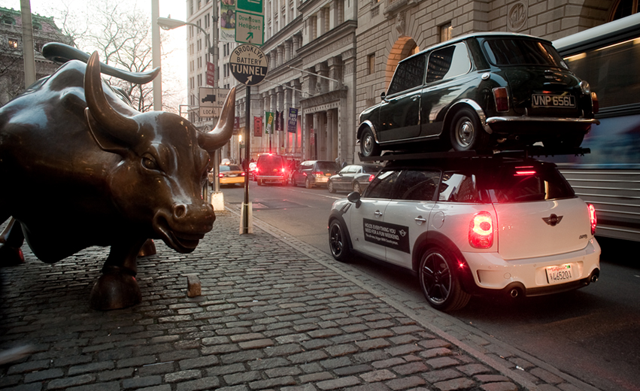 Eight years later, MINI has an SUV of its own. This move has caused no small amount of controversy here on MotoringFile. For a brand that introduced itself to America under the mantra of “The SUV backlash starts now”, producing a crossover seems to some like a betrayal of the brand’s personality. Personally, I don’t see it this way, and MINI’s latest environmental advertising stunt involving a Countryman and a classic Mini perfectly demonstrates my thoughts on the subject. 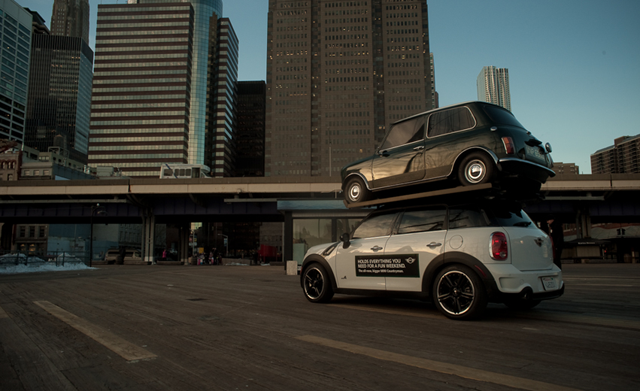 In my opinion, the genius of MINI’s original SUV stunt was about demonstrating how to do more with less. It was as much about how needlessly large American vehicles had become as it was about how cleverly small the MINI hatch really is. MINI doesn’t build a small car for the sake of being small, but rather because if you’re very, very clever you can do a lot with a very small car. You can go fast. You can go pretty far on a gallon of gas. You can turn really sharp. Your car can look really cool and be genuinely nice in its details. You can haul a surprisingly useful load in a pretty small boot. Personally, I don’t think this is a formula for a single car. I think this is a philosophy MINI could apply to any segment. I think you could have a MINI passenger airliner that fit this philosophy of small but smart.

I think the Countryman is actually the ultimate backlash against the SUV â€” against the notion that I need a huge, lumbering, inefficient vehicle to haul people and gear. Where the R50 fit snugly on the roof of that Ford Excursion, look at how the classic Mini overflows the top of the Countryman. Beyond the tongue-in-cheek, self referencing nature of this stunt, I think it makes a big statement about what you can do with a small car and that’s what MINI is all about.