Friday MINI invited MotoringFile for rare glimpse inside their corporate headquarters in Munich. Known as the ‘MINI House’ inside BMW, the building is a nondescript in almost every way except for the MINI type and black facade on the front. We were invited here (along with a couple other handpicked journalists (Edmunds, Autoweek and Cool Hunting) as the first outsiders to see the inside the building – the inside of MINI.

The day before we had wondered throughout the basement corridors of BMW with seemingly light security. New 1 and 3 series models were parking and driving around and there seemed to be a relaxed attitude to us being there. At MINI things were different. The first step? I was told I had to surrender my passport. Clearly there will be no snapping a few pics and running for it. So cameras and mobile phones away I reluctantly gave it up and headed inside. As we talked around the corner and into the building I noticed one empty spot for the head of MINI Dr. Armbretch – undoubtedly doing important things elsewhere in the BMW empire. 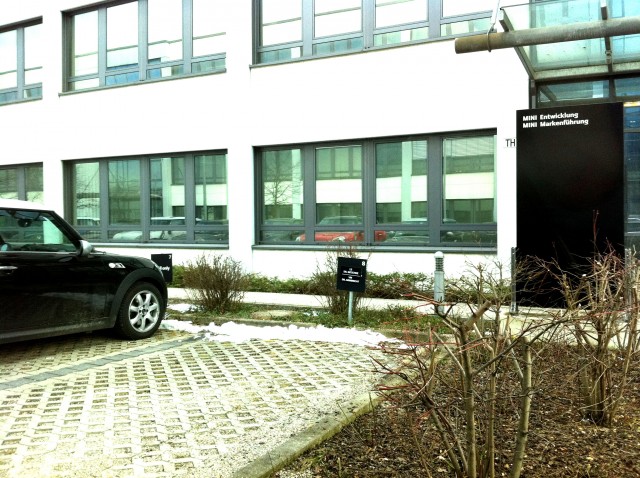 Walking into the building we quickly turned left and headed down a hallway. It’s probably a lot like the hallway in your office except conference rooms had names like Clubman and Traveller. Inside each of the conference rooms were nothing but large tables, polycoms and white boards. You can just imagine the discussions and decisions made here.

Once we got to the end we entered the a large room that spanned the entire width of the building. In it were prototype dealer layouts (a new bar-like layout that mimics a kitchen setting), a bar prominently featuring Red Bull, ambient lighting, new accessories, apparel, and at one end, a long table. This was the place where strategic brand and product decisions are made. The journey had ended – I was is the heart of MINI. Once the coffee, sparkling water and incredibly fresh German pretzels were handed out we got down to business. The MINI team had laid out a huge collection of stats, photos and topics all around us on the wall to discuss. Renate Fritz-Reymann (head of strategy and planning for the MINI brand) started our discussion with talk about the growth of the brand. In numbers alone the growth has been staggering; there are now over 1000 dealerships (104 in the US) in 91 markets around the world. Production hit 234,000 in 2010 making the MINI larger than Infiniti, Smart and even Porsche.

While sales decline slightly in 2009 it’s been quickly made up in 2010. And the largest market? The United States (for the past three years). Rounding out the top three are the UK and Germany in varying order.

Another huge growth area is China. In a matter of five years the country has gone from zero to 46 dealers and is quickly moving up the ladder in terms of sales.

The cars have grown in every way. From three derivatives to 28 MINI has expanded its offerings dramatically from the 2001 launch. From the low end MINI First to the WC50 the brand’s legs up and down the market are remarkable considering the fact that, despite 28 different variations, there are still only four different models.

One of the most impressive things is the youth of the MINI brand. The average age of owners worldwide is 44 – one of the lowest ages in the industry. In the US that figure is 42 (compared to 45 for BMW) and that puts it at the lowest figure of any car company in the North American market. Germany is even lower at 40. Turning to the used MINI market that number drops dramatically into the 30’s.

Yet throughout it all MINI is utterly consistent with its message worldwide. Its a message that makes a nod to history but is clearly young and vibrant. Interestingly itâ€™s a feel that is quite at odds with BMW. In fact going from BMW headquarters to the MINI House you couldn’t help but notice the lack of ties and rushing from one meeting to the next. While MINI executive take their roles very seriously they very clearly live the brand, down to the jeans and blazers.

Around 70% of MINI owners worldwide name their cars. Think about that for a second. What kind of product demands that level of affection and connection? It’s a product that is authentic. Authentic to it’s history and in symbiotic to its marketing. Compare the former to the Fiat 500 or the the VW Beetle – both cars that do not mirror the original revolutionary principles of their predecessors. The MINI has the packaging (albeit compromised by modern safety needs), the sound, the feel and the look that made the original such an icon. This was a point that Fritz-Reymann made clear several times and it’s one that is easy for the market at large to forget.

Then there’s the Rocketman. The MINI concept that has stolen the hearts of MotoringFile readers (or at least the vast majority). MINI was somewhat surprised when I told them how well the car had been received on the site. Markus Syring (the head of exterior design for MINI) almost did double take when I mentioned how much itâ€™s been lauded on the site. He was visibly happy and quite clearly proud of the little car. The Rocketman, conceived almost simultaneously by Srying and form MINI Head of Design Gert Hildebrand, is that rare MINI concept that has no defined production plans at this time. MINI has grown the brand in size with the Clubman and the Countryman so going smaller was the next natural move. Will they build it? I think itâ€™s honestly still being decided. But the positive reaction helps immeasurably.

Is there a master plan across both BMW and MINI? Yes and no. One of the things that struck me in talking with the MINI strategist and planners is how independent they are. This may come as a shock to come but MINI is a very independent company. Iâ€™ll admit I was taken a-back by this realization. These people love the brand and they fight for many of the things we love. They want what we all want. And to BMWâ€™s credit (a small independent automaker) they have seen the logic is allowing quite a bit of autonomy. More specifically the BMW Board is smart enough to green-light something like the Rocketman introduction happening just a day after the huge announcement of the BMW i sub-brand. It doesnâ€™t take much to realize that there are two competing ideas between the two products. But the BMW Board believes in the MINI brand and the approach that the planners, designer and strategists have created. As much as we all complain about MINI from time to time, weâ€™re all lucky to be financially and emotionally invested in a brand that understands, is passionate and care about the product. How important is the JCW brand to MINI? Essential was the answer of the group. MINI looks at this brand as another key to their authenticity. So heavily invested in it that the WRC rally car will technically be a JCW model. And the forthcoming Rally package for the Countryman will of course carry JCW branding.

But beyond that it was easy to read between the lines that they want JCW to be special like all of us. I would guess that some of this struggle has to do with cost associate with such a young brand (remember itâ€™s only been two years since BMW bought the brand outright). The idea of the red roof was mentioned in conversation as something they want to do more of. They also mentioned the JCW aero-kit finally going to the factory. With that they can now offer the JCW pack which can give any MINI the look the JCW without the price dealer install. Reading between the lines it also gives MINI more flexibility to for upcoming models or special editions. And with MINBI Yours (MINIâ€™s new exclusive custom program detailed on MF last Friday) the possibilities are almost limitless. 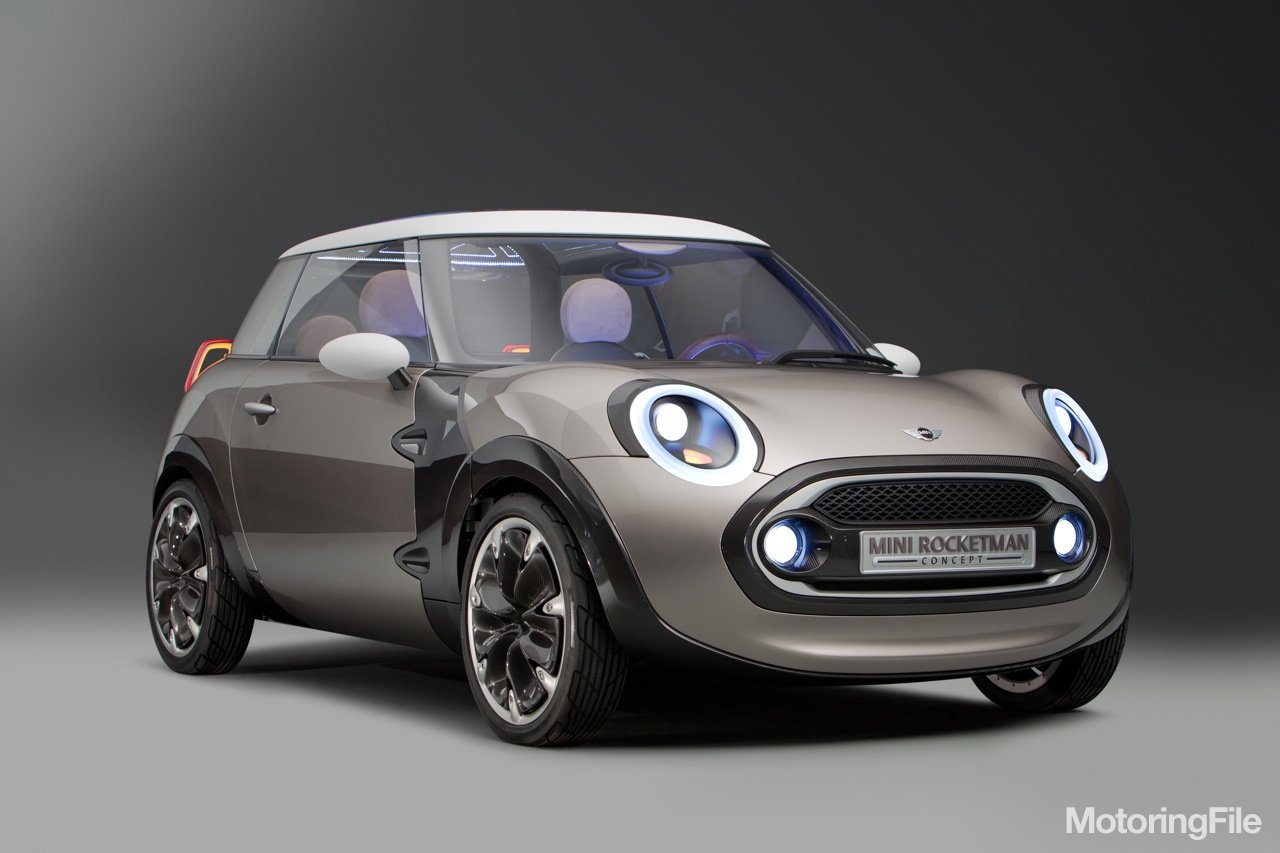 Unfortunately MINI didnâ€™t give much away when it came to future thinking and products. However one key thing came up close to the end of the meeting thatâ€™s worth mentioning. While MINI has gone a long way in expanding the line-up they feel that they still must change the image that they are a one-product brand.

Without question that means that MINI will continue to push for new products that both embrace history and perhaps even push the boundaries a bit.

As we were wrapping up the meeting it occurred to me how independent MINI really is within BMW. Yes they leverage technology and engineering strength of BMW. But MINI brass are fiercely determined to keep the brand true to its heritage and relevant to the marketplace. The dedication and enthusiasm of this team is obvious and you canâ€™t help but be impressed as both a journalist and a MINI enthusiast.

MotoringFile’s Up to the Minute Detroit Photo Gallery