The MINI community is the one fantastic accessory you won’t find on the Configurator. It’s free-of-charge, but it requires participation. That community has its online elements like MotoringFile or MotoringAlliance, but if you really want to experience the community, you’ve got to attend an event like MINIs on the Dragon. I experienced this first hand this year, as MOTD 2011 was not only my first time at The Dragon, it was my first real MINI event. 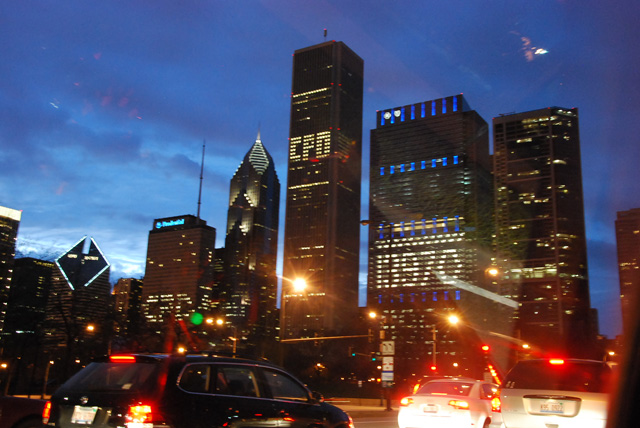 Attending MOTD meant two solid days of driving â€” motoring from the Twin Cities, overnighting in Chicago, and finally arriving at Fontana Resort in North Carolina. I headed out Wednesday morning from south St. Paul and met up with Gabe just outside Chicago some seven hours later. With some pizza and brew consumed, Gabe and I talked cars and the road to come. It was easy conversation, since we have such similar tastes in cars. He’s excited to be taking delivery of his M1, and with good reason. He also sent his greetings to everyone at The Dragon. With our powers of MotoringFile united, I set off the next morning for Fontana. As far as I’m concerned, the brilliance of the MINI is its blend of premium performance and economy. With premium gas running me as much at $4.85/gallon, I wanted to emphasize my R53’s thrifty capabilities on my nearly 2,200 mile round trip. While there are plenty of extreme hyper-miling techniques available, I decided to go simple and trade speed for economy. I knew there were plenty of driving thrills in store for me on Hwy 129, so I stuck with the speed limit for my 1000 mile leg to The Dragon. My economy was fantastic â€” nearly 35 mpg when I exclude the stop-and-go nonsense I encountered in Chicago. More than that, I really enjoyed embracing the journey, rather than just pining for the destination. When you’ve got two days to do, you’d better relax. Keeping to the speed limit actually helps, believe it or not. But be warned, driving the speed limit will not help you make friends on the roadways. 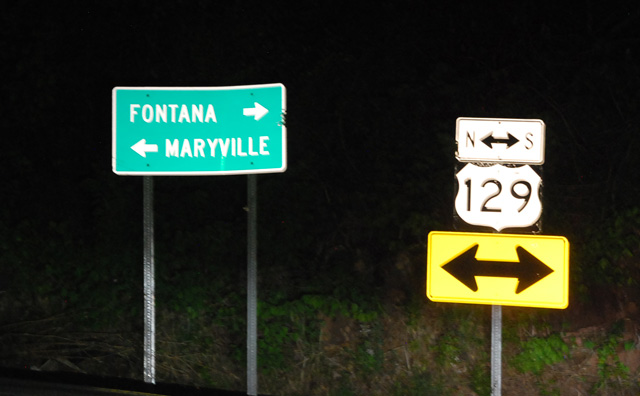 Because I’d come through Chattanooga to visit some extended family, I actually drove The Dragon for the first time just to get to Fontana Resort. Better yet, I got to drive it at night. For those who’ve never driven US-129, it’s an amazing piece of road. It’s more than 300 turns in fewer than 12 miles, and these aren’t just little bends. We’re talking massive 180Âº switchbacks, winding chicanes and constant changes in elevation. But where many roads in America today are flat, crumbling pothole minefields, US-129 is not only smooth, but those switchbacks are banked at angles to make a speedway proud. At nearly midnight local time, my R53 and I wound our way through the darkness taking it easy in the bends. The last thing I wanted to do was wrap myself around a tree on the side of a smokey mountain in the middle of the night. But despite my caution, simply arriving at MOTD was an absolute blast. 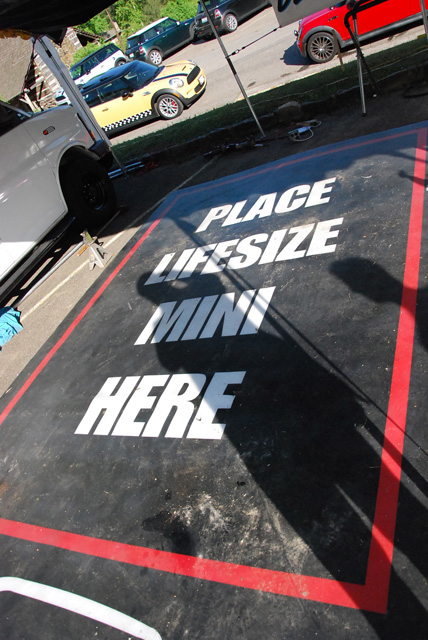 If you’re going to get the full MOTD experience, I say you simply have to stay at Fontana Resort. This sprawling campus of cabins and lodges is the kick off point for everything. More than that, there’s something about sharing one huge campsite with several hundred other MINI owners that really brings the week to life. Being onsite also makes it easy to party hard and know that at worst, you’ll only have to stumble up the hill to find your bed. Waking up Friday morning (and yes, it was still morning), I made my way down to the main vendor area. The whole area was buzzing with MINIs, vendors and people sampling the buffet of MINI-focused merch. Everything from accessories, to graphics, to performance parts was within 30 yards walk. What’s more, there were numerous installations going on all the time. Everything from sway bars and supercharger pulleys in the Detroit Tuned tent, to roof graphics and bonnet stripes in the DMP Productions tent. It felt much less like a trade show than one big MINI club garage day.

That low-key attitude is pervasive throughout the entire event. Nothing about MOTD is wound up. Everything is laid back and casual. There’s little or no cell phone signal at Fontana, the scheduled events are very come-and-go, and despite the frequent growl of MINI exhaust, nobody ever seems in a hurry. It’s an event that forces you to let go of your over-scheduled daily routine, if you’ve got one. It forces you to unplug and chill out. No wonder so many people take MOTD as their one big vacation trip each year.

Wandering through the vendor paddock, I heard a familiar voice. Detroit Tuned founder and fellow WhiteRoofRadio host Chad Miller was rallying his crew for the day’s installations. To date, Chad, Todd, Gabe, DB and I have spent hours on conference calls recording the podcast, but until Gabe the day previous, Todd was the only one of the group I’d actually met in person. It was great to finally meet Chad, who quickly showed me around his makeshift traveling auto garage. High storm winds the day before had trashed his tent, which was now cleverly MacGyvered back together and secured on one end to the team van full of tools and MINI parts. 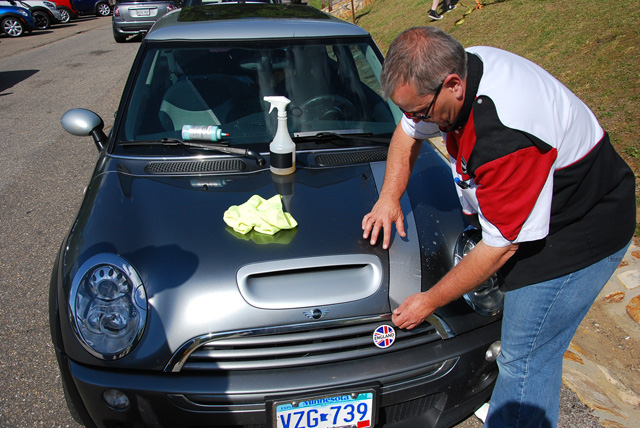 No sooner had Chad shown me ’round, when another familiar voice rolled up in his MINI Cooper S JCW GP. Our man Todd Pearson had his DMP Productions tent set up right next to Detroit Tuned. I was glad to see Todd because not only was I looking forward to hanging out with three-fifths of the WRR crew, but my R53 needed its silver stripes put back on. As I continued to wander the paddock, I met tons of people familiar to the show or who I knew of in other contexts such as MotoringAlliance or OutMotoring. What’s great about The Dragon (and I’d wager any MINI event) is that you won’t be a stranger for long. Misanthropes had best stay home. 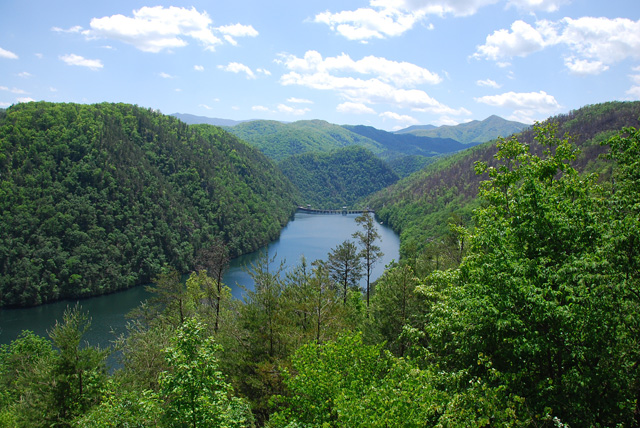 Friday carried on for me with a mid-afternoon trip down The Dragon. I needed to head back down to civilization to make a phone call, but more than that, I was excited to run the road in the daytime where I could actually see deeper into the corners than just what my xenons would illuminate in the night. The experience was surreal. Even when driven leisurely, The Dragon is a challenge in any car. In my R53 though, it was hammer and nail. It was as though the MINI was made for this road and vice versa. With each whipping turn and each heal-toe shift, my MINI growled and zipped its way through the mountains. It’s like driving a go-kart down a roller coaster.

Friday night at The Dragon is one of its quintessential events: The Brew Swap. A huge group of beer enthusiasts gathered in the main lodge hall where tables were set up and an incredible variety of beer and soda could be had for the simple exchange of a bottle. The place was bustling when I arrived. People take this event very, very seriously. One guy had dozens of beers only found in Germany. Others had rare, obscure brews from their local areas. Samples abounded and everybody soon had new flavors on their tongues and new brew in their boxes. That and a handsome new Dragon Brewswap tumbler from the fine folks at Detroit Tuned. Brew soon turned to song as the karaoke cranked up and an increasingly lubricated crowd sang their way into the night. 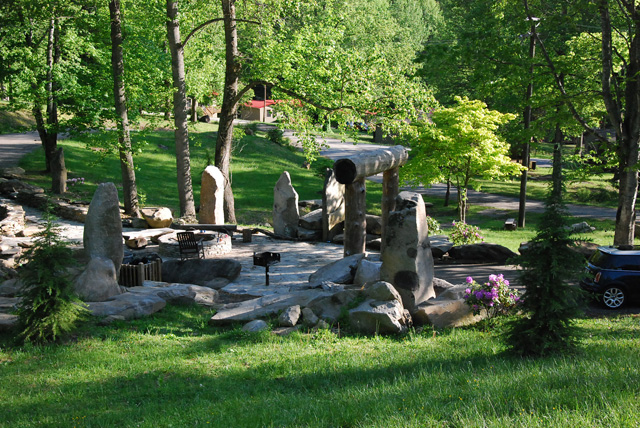 Friday night ended for me the way most nights at The Dragon did: at the fire pit. Just down the slope from my cabin was a Stonehenge-looking fire pit with stone benches all the way around it and ominous looking stone pillars. While campfire company is great in most any setting, hanging around the fire pit at The Dragon was especially enjoyable because there was something we could all talk about: MINIs. It wasn’t the only topic of conversation, obviously, but having so much in common with everyone ’round the fire was as fun as it was comfortable.

Saturday morning came comfortable and foggy. I made my way down to the main vendor area. Todd was slinging vinyl. Chad was turning wrenches in the Detroit Tuned tent. Aaron from OutMotoring was selling MINI accessories left and right. The whole row was bustling with activity â€” MINIs coming and going. One particular MINI of interest pulled up outside the DT tent. It was a Countryman All4 Chad had customized in the weeks leading up to The Dragon. The night before, at the fire pit, Jill (the owner) had offered to let me take her R60 down The Dragon. With several good runs under my belt in my R53, this was the perfect opportunity to contrast the newest (and largest) addition to the MINI family against the car that helped make the modern MINI famous. 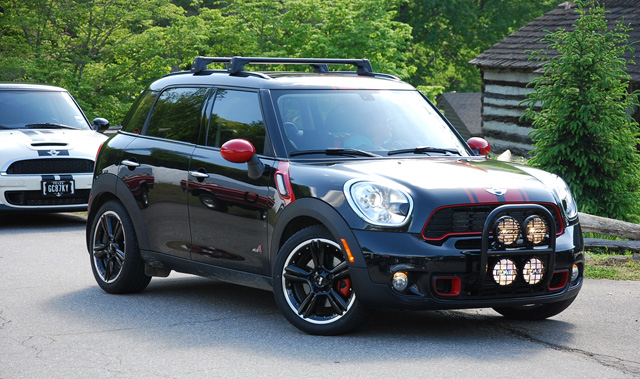 I’ll be writing a more in-depth review of the Countryman All4 on The Dragon in the coming days, but I can say this. The R60 is 100% MINI. Sure, it feels taller and it’s got more mass, but chucking the All4 through the switchbacks and sweeping turns of The Dragon convinced this MINI owner once and for all that the Countryman absolutely deserves to wear the MINI badge. Unfortunately, my evaluation had to be cut short, as the twists and turns of The Dragon (and a lack of a real breakfast) actually gave me motion sickness behind the wheel. I was in good company though, Chad did the same thing earlier that morning. Thankfully neither of us spewed any vital fluids inside Jill’s Countryman. 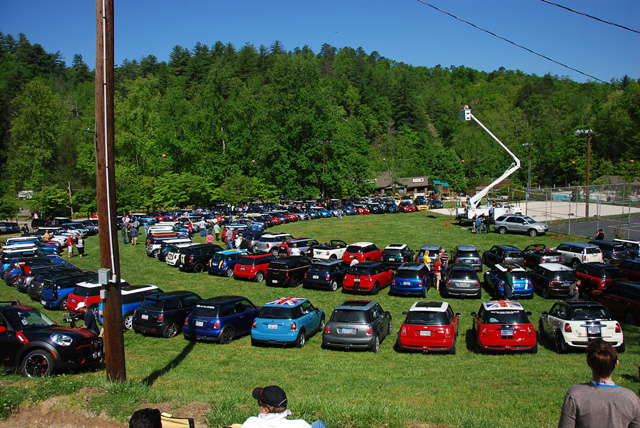 Once I got some food in me, I went down the hill to do a load of laundry. By the time I finished, there were MINIs lining up all over Fontana. It was time for the group panorama photo. Why not? Once the line got moving, I pulled my MINI in a few cars behind a couple fellow Minnesotans whose MINI was done up in blue and yellow like a flag of Sweden. The line-up coordinators got everybody set up and parked in radii around the photographer, a rather unpleasant fellow barking orders over a megaphone from a bucket crane. I was glad to be a part of the photo, but after thirty seconds of this guy talking to us all like middle school students, I had my mind made up that he wasn’t getting any of my money. Here’s hoping those who bought the photo enjoy their print though.

For most, Saturday night is the final night at The Dragon. The plan was to attend the farewell dinner, but our man Todd pulled me into the lodge bar and kept buying me drinks. How do you turn that down? Dinner in Fontana’s lodge restaurant followed and the party inevitably led back to the fire pit. We told each other stories, talked about our cars, and regaled each other with tales of our impending trips home. I had two days of driving in front of me, but it didn’t matter. The week had been so much fun, spending a couple more days with my car sounded great. 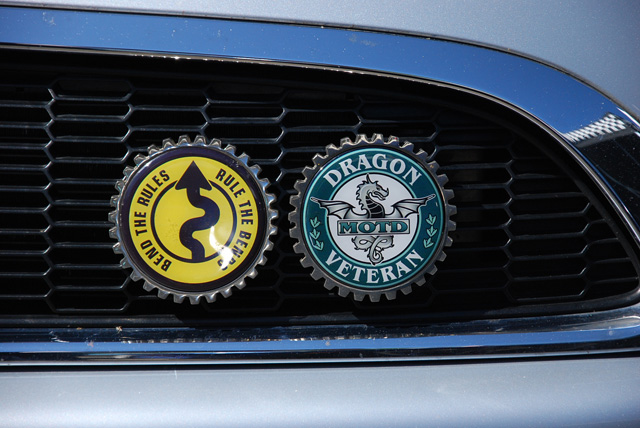 Although I saw a handful of people on my way out the next morning, I said the majority of my goodbyes at the fire pit that night. I was sad to leave Fontana, honestly. It was so much fun to have so much fun with so many fun people. I’ll definitely be back next year if I can help it. My two days of driving home did little to diminish my renewed love for all things MINI. I wouldn’t have made the trip in any other car. If you can swing it, add The Dragon to next year’s plans. You and your MINI won’t regret it.